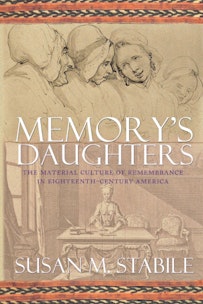 Memory's Daughters: The Material Culture of Remembrance in Eighteenth-Century America by Susan Stabile

In 1934, Maria Dickinson Logan set fire to the portrait of her relative, Deborah Norris Logan (1761-1839), painted by Charles Willson Peale in 1822, after misreading Logan’s intent as written in her diary. This Philadelphia story is just one example of how women’s history must often be extracted from the margins, with carefully interpretation to add perspectives to what we think we know. When women’s words and objects aren’t being saved, they are often being misunderstood. Yet, like Deborah Norris Logan, who was the first female member of the Historical Society of Pennsylvania, women frequently served as the memory-keepers for their families and communities.

In Memory’s Daughters: The Material Culture of Remembrance in Eighteenth-Century America (Cornell University Press, 2004), Susan M. Stabile analyzes objects and commonplace books belonging to a group of women writers from the Delaware Valley, exploring the valuable actions they took to preserve their unique perspectives on the events of the late 1700s and early 1800s. Stabile brings the meaning and importance of the work of these women back into focus, examining its more personal nature and contrasting it with the “heroic myths of the revolutionary generation.” As Stabile explains, this understanding of women’s intellectual work “challenges us to reconsider what public 'historical' memory means” in the early United States.

Learn about the now-lost Peale portrait of Deborah Norris Logan and how its significance goes beyond historical or sentimental value. Read on for Stabile’s analysis of a different kind of object, focusing on “the language of the fan” to present multiple meanings about epistolary fans, which combine words, images and interpersonal relationships.

Watch this March 2022 event hosted by American Repertory Theater and the Museum for a conversation exploring Betsy Ross’s influence on the cultural memory of women’s contributions to the American Revolution. Info & Tickets

“Today I paid CW Peale one hundred dollars for my Portrait,” writes Deborah Logan in July 1822. “To say truth, tho’ like me, it is so ugly, that I feel no inclination to let Posterity think me quite so disagreeable, as they unquestionably will from this picture. But the artist wanted to make up a sum of money, and I very gladly paid it to him, because I thought I had not done entirely well in delaying to give him an opportunity to finish his work.” Concerned that she is “one year older, nearer to Eternity, uglier and more infirm,” Logan delays the portrait’s completion for three more years. She brings the portrait home to Stenton and hangs it over the clock in the library but is haunted by her own visage “looking at me.” A material reminder of time’s passage, the portrait is “a very churlish thing – my kind friend and neighbor has caractured me sadly….I believe I shall be tempted to put it out of my way altogether.” Encouraging the portrait’s destruction, her cousin Sally Norris Dickinson “advised me to burn it,” remembers Logan. “It don’t vex me much, but to be sure it is inexpressibly ugly…[and] everyone present condemned it.”

…In 1934 Maria Dickinson Logan ensured that posterity would never remember her relative as ugly, disagreeable, or infirm, taking Sarah Dickinson’s suggestion all too seriously…Ironically staging her fiery drama at the Preservation Society’s commemoration of Stenton, Maria Logan misreads her [relative’s] diary, taking the older Quaker’s self-conscious complaint about portraiture out of the larger context of her celebrated life as an antiquarian. The ritual destruction of the portrait – cutting the face from its background like a frameless silhouette, slicing Peale\s careful brushstrokes into unrecognizable pieces, and enclosing the scattered fragments in an envelope to be delivered to the dining room fireplace – occurs in the very place where Deborah Logan wrote and preserved historical archives and personal memories for almost sixty years.

The significance of the lost portrait goes beyond its historical or even its sentimental value. Painted when Logan was a “Dame of 64” by the eighty-two-year-old Peale “(without Spectacles!),” the portrait suggests the accumulation, indeed the culmination, of an aging woman’s memories…the painting signifies the lost cultural reverence for elderly women as living repositories of knowledge and cultural memory. Responsible for the transmitting of memory from one generation to another, old women in the early Republic responded to personal and social change by devoting themselves to the traditions and values of the past.

On 25 January 1765 Elizabeth Fergusson sent a beautiful folding fan to her friend Juliana Ritchie, inscribing a poetic epistle on the fan leaf. Though the fan is no longer extant, the poem, along with Ritchie’s response, is copied in Fergusson’s commonplace book, “Poemata Juvenilia.” Taken together, the poems illustrate the mnemonic value of letters – as inscriptions of the mind, heart and hand – between friends. Like a mirror, the fan reflected a woman’s emotions and continued the epistolary “conversation on paper” on its handmade paper leaves….Sent to an absemt friend, the epistolary fan translates motion into emotion. The winnowing fan was an indispensable accessory of a woman’s toilette, protecting the face, repelling insects, and dispersing unpleasant odors. More important, it preserved and encouraged collective reminiscence.

As marks of friendship exchanged among the Philadelphia coterie, fans were tokens for collective reminiscence. Embodying the heart and accenting the face, the fan spoke the language of memory. Though upper-class women were taught the art of fan-making, most women purchased hand-painted or printed fan leaves and inserted sticks of wood, ivory, tortoiseshell, or mother-of-pearl into the mounts. Outlived by their more durable sticks, fan leaves, as Logan explains, were often replaced: “The new mountings of Fans (putting new Paper upon Old Sticks) was an article of millinery business, and upon taking them to be done, your taste was consulted as to what mount you would fancy, by having all the Shop spread before you – the usual price of such a reparation was half a Crown. In the old times you seldom bought an Ivory fan under two dollars.” But as the plates from Diderot’s 1765 Encyclopedie…illustrate, more than replacing old leaves, fan making was a highly technical and distinctly collaborative art, employing more than twenty types of artisans, including leaf designers, printers, stick carvers, inlayers, gilders, ribbon weavers, and assemblers. The process was made easier by the invention of the pleating mold in 1760: the pleated leaf (or two glued leaves) was adhered to slips, or ribs (the narrow upper portion of the sticks), which were supported by a set of sticks gathered at the base by a rivet and folded up between the two outer guards.

Although images were haphazardly painted on early fan leaves without any forethought about its mounted or folded outcome, by the mid-eighteenth century artists accommodated the decoration of the fan to its utility. They revamped the mount’s design, maintaining the images on either side of the leaf, but replaced the singular, panoramic scene of the principal side with a tripartite scheme of cartouches. Like the mounts, the sticks of pleated fans changed over the course of the century. Called monture sequlette by 1760, fan sticks narrowed and radiated from the rivetlike spokes, creating spaces between the sticks and interrupting the previously continuous surface decoration. Such careful spacing between images on the fan mounts and sticks signaled that fan styles had moved from the baroque and rococo to the neoclassical. Revived by the architectural and interior designs of the Adam brothers, neoclassicism required order, regularity, and symmetry – the same aesthetic and organizing criteria as for the manuscript commonplace book. 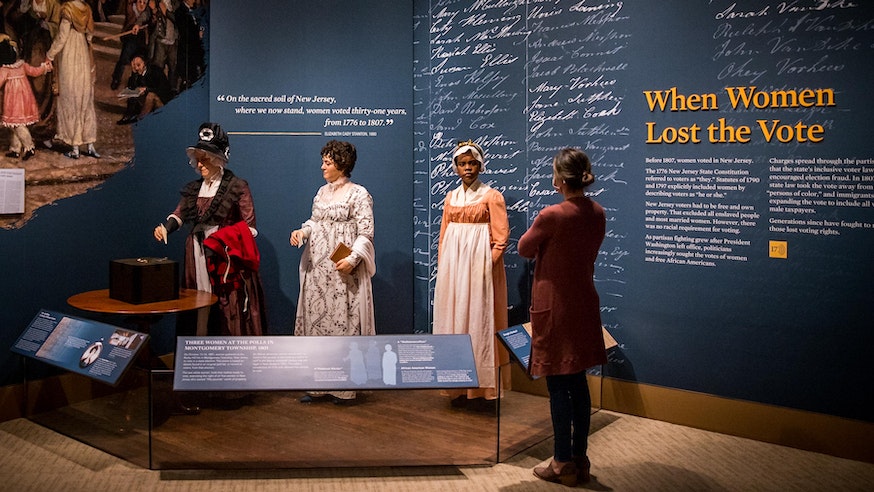 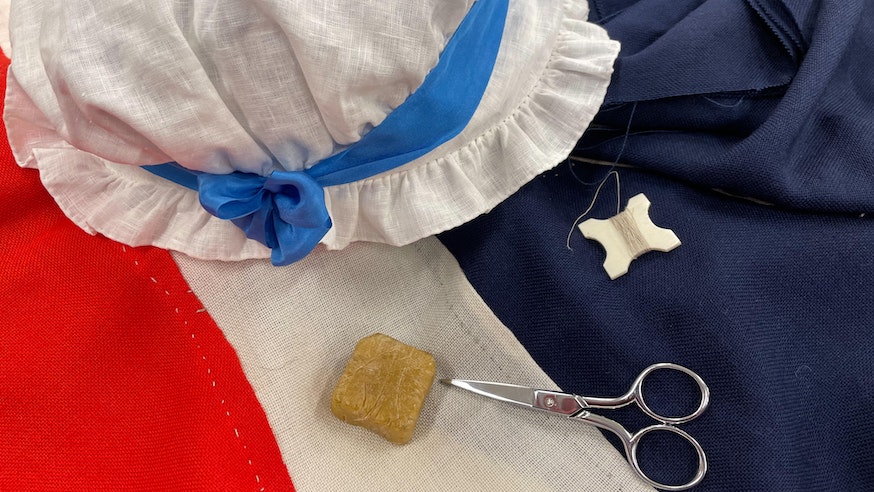 Watch this March 2022 event hosted by American Repertory Theater and the Museum for a conversation exploring Betsy Ross’s influence on the cultural memory of women’s contributions to the American Revolution.
Read More