We welcome you to explore the Museum of the American Revolution’s Virtual Museum Tour. Immerse yourself in the history of the nation's founding through 360-degree panoramic images of our galleries, high-resolution images of objects and artifacts, and a guided audio tour.

Navigating our galleries in the Virtual Tour is simple. Use your mouse, trackpad, or finger to move left or right and up or down for a full-immersion experience.

By zooming in, you can view the intricate details of objects, works of art, and even our life-size tableaux scenes.

The tour can be viewed in fullscreen mode by right clicking and selecting “Enter Fullscreen” when hovering over a rotating gallery photo.

These immersive experiences plunge you into the action! Explore a 360 degree view of a nearly two-story replica of America’s first Liberty Tree, where colonists gathered to organize a revolt against the British; a meeting of men and women from the Oneida Indian Nation about whether to support the British or Revolutionary side; and board a large-scale replica of an 18th-century privateer ship to discover the war at sea.

We are pleased to support the study of American history with this tour and by providing links to other virtual museums tours, including George Washington’s Mount Vernon, Thomas Jefferson’s Monticello, and the New-York Historical Society. See Content

Within our gallery, you’ll encounter the personal stories and objects of the diverse range of individuals who were part of establishing our nation, including women, native people, and free and enslaved people of African descent.

Expand your understanding of the “founding generation” by learning about America’s first published black female poet, Phillis Wheatley, examine artifacts including an intricately carved woman’s busk (corset piece), and encounter a conversation between enslaved Virginians and a black Loyalist soldier in 1781 in a life-size tableaux scene.

Along your way, you’ll encounter these four questions. They divide the Museum’s galleries into four key sections, and you can enter the experience at any point.

We invite you to investigate the answers to these questions throughout your virtual journey–exploring the story of the American Revolution like never before.

Exhibit: The Road to Independence

How did people become Revolutionaries?

The rumblings of the American Revolution began more than a decade before the “shot heard ‘round the world” ignited America’s War for Independence. Discover through seven galleries how the American Colonists–most of them content and even proud British subjects–became Revolutionaries as the roots of rebellion took hold. 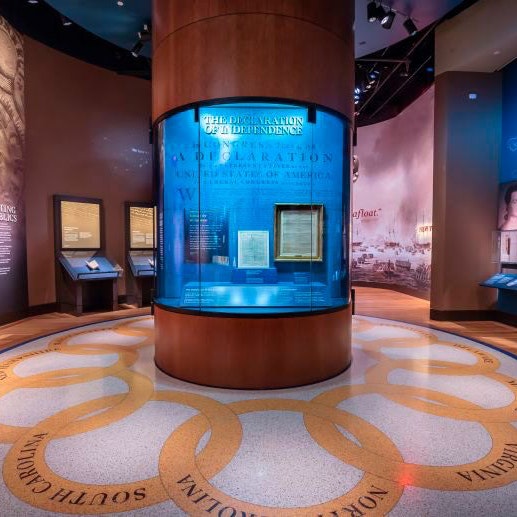 Declaration of Independence Gallery Highlight: The Promise of Equality

Learn how the words of the Declaration of Independence immediately helped fuel the aspirations for personal liberty of ordinary Americans. Explore the story of Elizabeth Freeman, an enslaved woman who sued for her freedom on the basis that she was entitled to natural rights. Explore what the Declaration’s promise of “equality” meant for all people, including women, enslaved people, and laboring men.

How did the Revolution survive its darkest hour?

Americans would soon learn that it was one thing to declare independence, and quite another to secure it. The Battle for New York, during the fall of 1776, tested Commander-in-Chief General George Washington and his Continental Army. Travel virtually through the American retreat from New York through the Battles of Long Island, White Plains, and Fort Washington, as 1776 came to a close and American troop numbers and morale began to dwindle. 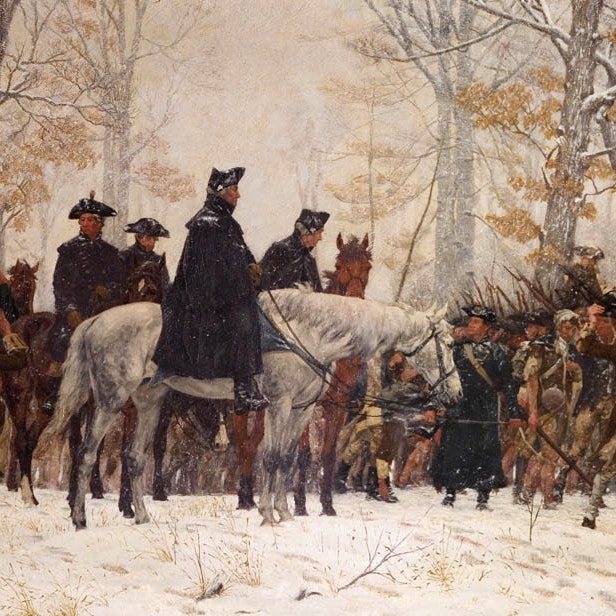 After the British's triumphal seizure of Philadelphia, the Continental Army withdrew to Valley Forge in the winter of 1777-78. Read about the common soldiers and families who endured the harsh winter at Valley Forge.

Find the prominently displayed March to Valley Forge painting and zoom in on the details depicted by William Trego in 1883 as the hardened veterans of the army limped into their winter encampment at Valley Forge. Their bare and bandaged feet leaving trails of blood on the cold ground.

How Revolutionary was the war?

With their global allies and privateering ships, Americans had predicted a quick victory over Great Britain. Instead, the Revolutionary War expanded. Frustration at the unexpectedly long conflict increased violence between Loyalists and Revolutionaries. Particularly in the South, the fighting became a civil war.

Explore the final years of the War for Independence from the multiplicity of perspectives of the people who lived through it. These three galleries cover the period from late 1778 when the War turned to the south including the Battle of Cowpens to the Siege of Yorktown. 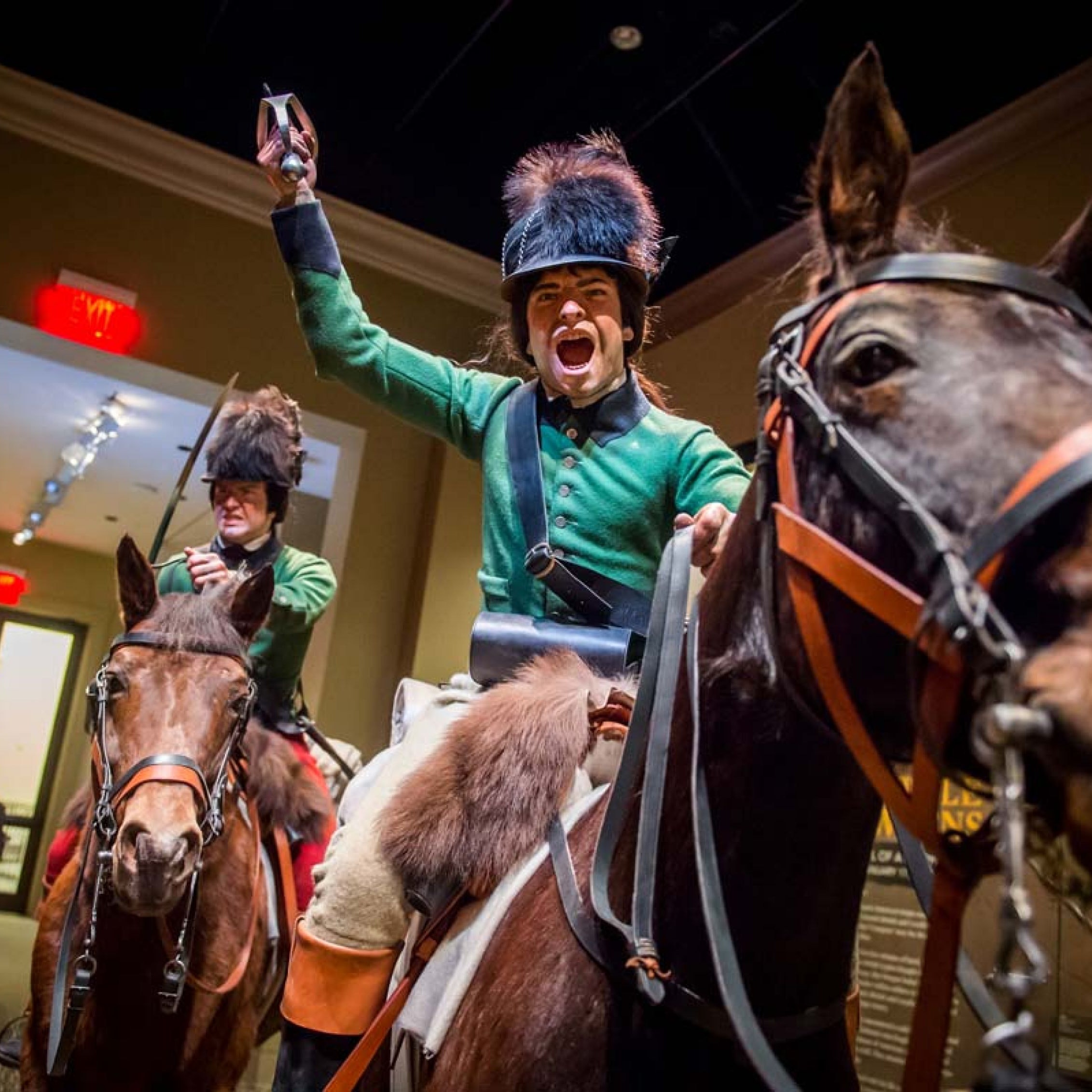 Encounter the life-size figures on horseback of Banastre Tarleton’s Loyalists Dragoons of the British, a loyalist corps, composed of Americans who sided with the king against Congress. Even amidst the horrors of the Southern war, Tarleton’s corps had a particular reputation for cruelty and mercilessness. Though these stories were sometimes exaggerated, the British Legion came to symbolize the extreme violence of war in the region. Despite their reputation for mercilessness, Tarleton’s British Legion struggled with politics like many Southerners. Many of them were “soft loyalists,” or American Continentals captured at the Siege of Charleston and forced to fight for the King.

What kind of nation did the Revolution create?

With the hard-fought establishment of the United States of America, the Revolutionaries succeeded in gaining independence. But then came the immense task of creating a nation founded on the principles of life, liberty, and the pursuit of happiness. As you conclude your journey, watch as the new nation–born of the War for Independence– begins its own.

Explore how the nation emerged from war to create a republican society that ensured that political authority came from the people in these last two galleries. From the critical period following the war to the Peace of Paris to the Constitution and the Bill of Rights, follow the debates and gain new perspectives on the challenges that the young nation faced at the end of the eighteenth century. 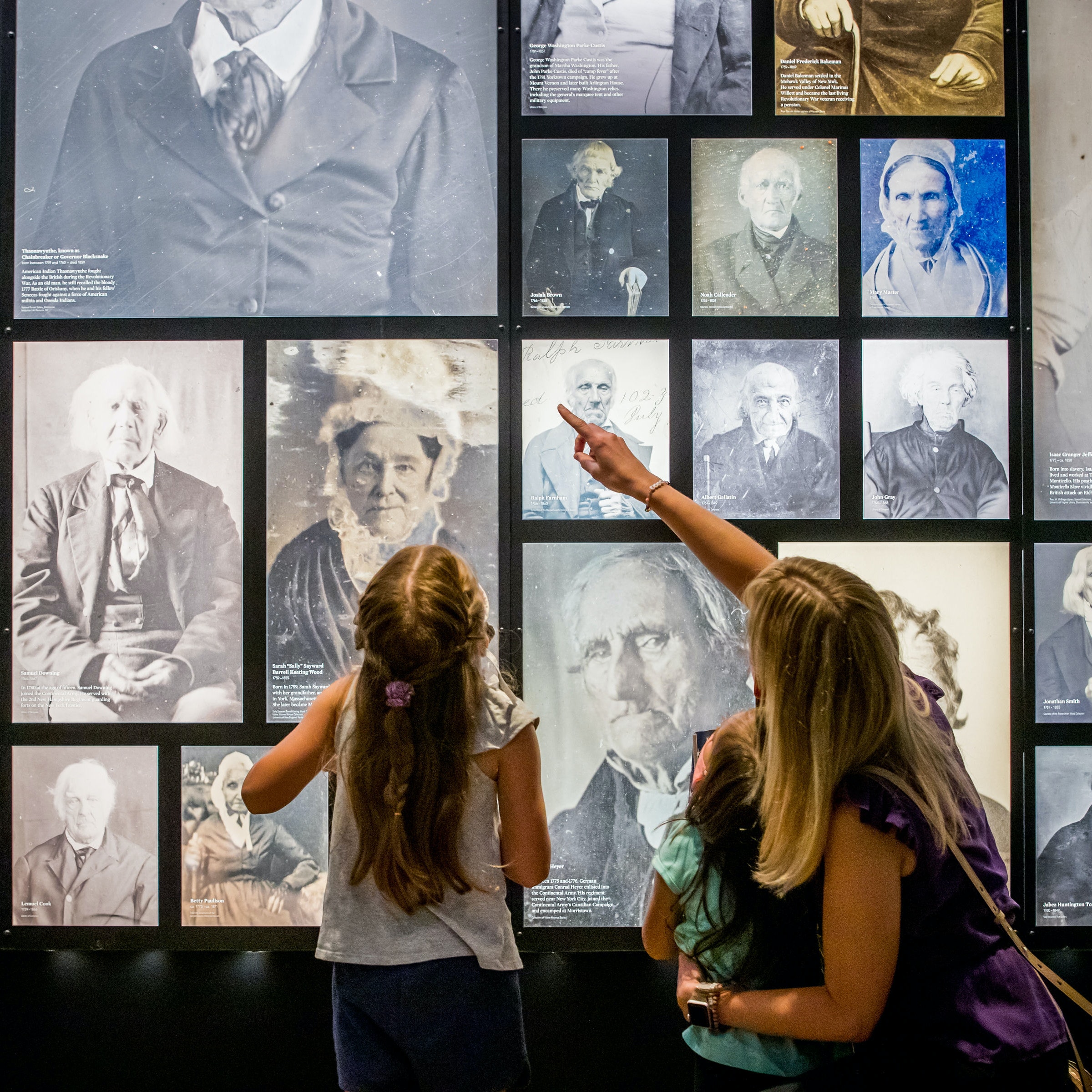 Come face-to-face with America’s first “greatest generation” through their photographs. Many veterans suffered after the war, as the new nation neglected their war heroes.

The last known Revolutionary War veterans died shortly after the Civil War, still many had their photograph taken.

Cap your exploration of the Museum and the story of the American Revolution in the moving and immersive film, Washington's War Tent. Follow the remarkable journey of General George Washington's Headquarters Tent, the cornerstone of the Museum's collection, from the Revolutionary War to the present.

Made possible by generous support from George S. Blumenthal 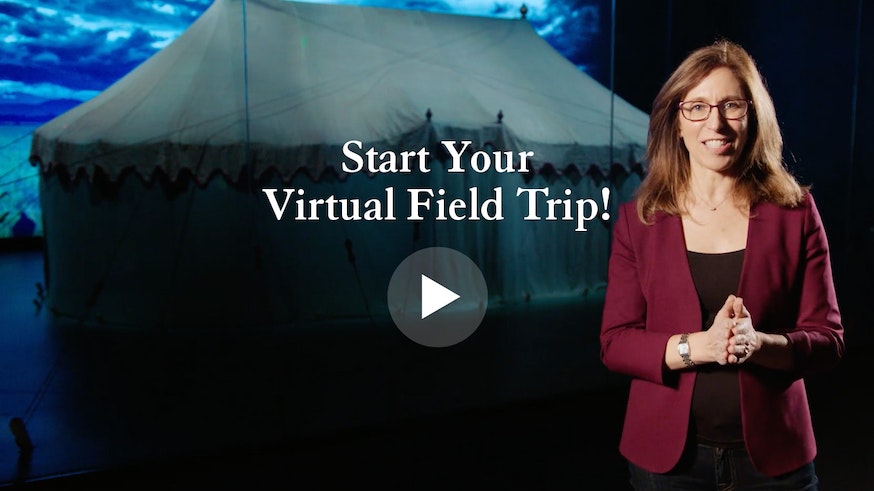 Beyond the Battlefield: A Virtual Field Trip

Take a virtual field trip, presented in partnership with Scholastic, to the Museum with author of the I Survived series Lauren Tarshis.
Read More