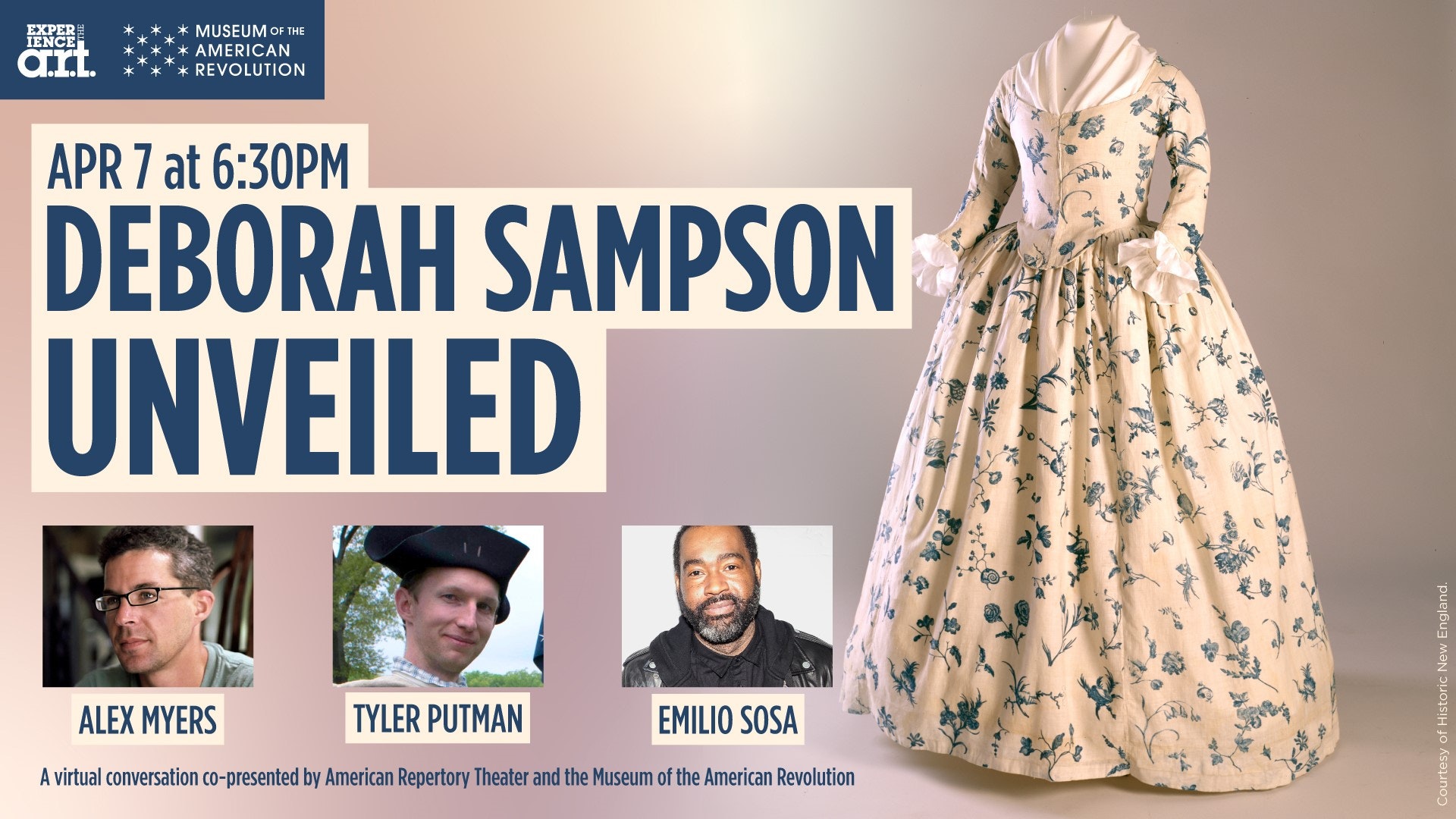 American Repertory Theater (A.R.T.) at Harvard University and the Museum of the American Revolution will co-present the next event in A.R.T’s Civically Speaking series, Deborah Sampson Unveiled: A Virtual Conversation, on Wednesday, April 7, 2021 at 6:30 p.m.

To be held on the wedding anniversary of Deborah Sampson, a woman who disguised herself as a man in order to fight in the Revolutionary War, the event will feature conversation between Costume Designer Emilio Sosa (A.R.T.’s upcoming production of 1776 among others) and acclaimed historical fiction author Alex Myers, plus a virtual tour of the Museum’s special exhibition, When Women Lost the Vote: A Revolutionary Story, 1776-1807, which features Sampson’s wedding dress, on loan from Historic New England.

Tickets are now available here. Free and open access to Deborah Sampson Unveiled and other virtual events is provided by the generous support of A.R.T. Members.

About Deborah Sampson Unveiled: A Virtual Conversation
Disguising herself as a man in order to fight, Massachusetts native Deborah Sampson (1760 - 1827) is the only woman known to have received a full pension for serving in the Continental Army fighting for American independence. Two years after an honorable discharge, Sampson married, lived as a farmer’s wife, and delivered lectures about her military experiences. What drove this Revolutionary’s break with tradition? How has our contemporary understanding of gender evolved the narrative about Sampson’s extraordinary life? And how is the history of gender expression in the Revolutionary period inspiring the work of Emilio Sosa, costume designer of American Repertory Theater’s upcoming production of 1776?

Explore these questions and more with A.R.T. (Cambridge, MA) and the Museum of the American Revolution (Philadelphia, PA) in this discussion with Sosa (1776 upcoming; The Gershwins’ Porgy & Bess, Tony Award nomination); and Alex Myers, a Sampson descendant, transgender advocate, and author of Revolutionary, a fictionalized novel based on Sampson’s story. Then visit the Museum’s special exhibition, When Women Lost the Vote: A Revolutionary Story, 1776 - 1807, to see Sampson’s wedding dress on loan from Historic New England and a recently discovered diary that reveals new details about her life.

Civically Speaking is A.R.T.’s series of virtual conversations, lectures, and performance events on history, politics, justice, and the meaning of democracy. Past events included Flap My Wings: 10 Years Since Tahrir Square; Resistance Mic! with performers Justin Danzy, Alex Marzano-Lesnevich, Oompa, V (formerly Eve Ensler), and a short film by John Lucas and Claudia Rankine; Just Us: A Conversation with Claudia Rankine and Orlando Patterson; Protecting and Deepening Our Democracy: What Should We Do Now? with Winthrop Laflin McCormack Professor of Citizenship and Self-Government at the Harvard Kennedy School Archon Fung; Talking Politics with Maxine Isaacs, and more.

About 1776
They knew they would make history, but not what history would make of them. Fed up with living under the tyranny of British rule, John Adams attempts to persuade his fellow members of the Continental Congress to vote in favor of American Independence and sign the Declaration. But how much is he willing to compromise in the pursuit of freedom? And who does that freedom belong to? This new production of the Tony Award-winning musical reexamines the pivotal moment in American history.

Directed by Jeffrey L. Page and A.R.T. Terry and Bradley Bloom Artistic Director Diane Paulus, the cast reflects multiple representations of gender, race, and ethnicity and is comprised of performers who identify as female, genderqueer, non-binary, and trans. The A.R.T.’s revival production of 1776 was postponed from May 2020.

Alex Myers is the author of Revolutionary (Simon & Schuster, 2014), Continental Divide (University of New Orleans Press, November 2019) and The Story of Silence (HarperCollins, July 2020). Myers came out as transgender in 1995, right before his senior year in high school. Since then, Alex has worked with schools and colleges to educate students, faculty, and administrators about gender identity as a transgender advocate. He has assisted dozens of schools as they redesign facilities, practices, and policies to be more gender inclusive. Learn more at alexmyerswriting.com.

Emilio Sosa is the costume designer for American Repertory Theater’s upcoming production of 1776. Sosa has received TDF/Irene Sharaff Young Master Award in 2006 and was named Design Virtuoso by American Theater Magazine in 2003. He has been inspired by historical events, which he incorporates into his design aesthetic. Sosa was a contestant on the seventh season of the “Project Runway,” set in New York, during which he won second place. Since the show ended, he has continued to promote esosa designs, a line he co-created with his brothers. In 2012, Sosa joined the cast of “Project Runway All Stars” season 2. Sosa was the costume designer for Topdog/Underdog, Gershwins’ Porgy and Bess (Tony nomination), Motown the Musical, and Lady Day at Emerson’s Bar and Grill.

About the Museum of the American Revolution
The Museum of the American Revolution uncovers and shares compelling stories about the diverse people and complex events that sparked America’s ongoing experiment in liberty, equality, and self-government. Through the Museum’s unmatched collection, immersive galleries, powerful theater experiences, and interactive elements, visitors gain a deeper appreciation for how this nation came to be and feel inspired to consider their role in ensuring that the promise of the American Revolution endures. Located just steps away from Independence Hall, the Museum serves as a portal to the region’s many Revolutionary sites, sparking interest, providing context, and encouraging exploration. The Museum, which opened on April 19, 2017, is a private, non-profit, and non-partisan organization. For more information, visit www.AmRevMuseum.org or call 877.740.1776.

About the American Repertory Theater
American Repertory Theater (A.R.T.) at Harvard University is a leading force in the American theater, producing groundbreaking work that is driven by risk-taking and passionate inquiry. A.R.T. was founded in 1980 by Robert Brustein, who served as Artistic Director until 2002, when he was succeeded by Robert Woodruff. Diane Paulus began her tenure as Artistic Director in 2008. Under the leadership of Paulus as the Terrie and Bradley Bloom Artistic Director and Executive Producer Diane Borger, A.R.T. seeks to expand the boundaries of theater by programming transformative theatrical experiences, always including the audience as a central partner. A.R.T. is committed to a long-term process of centering anti-racism in its practice, policies, culture, pedagogy, governance and organizational structure.

Throughout its history, A.R.T. has been honored with many distinguished awards including the Tony Award for Best New Play for All the Way (2014); consecutive Tony Awards for Best Revival of a Musical for Pippin (2013) and The Gershwins’ Porgy and Bess (2012), both of which Paulus directed, and sixteen other Tony Awards since 2012; a Pulitzer Prize; a Jujamcyn Prize for outstanding contribution to the development of creative talent; the Regional Theater Tony Award; and more than 100 Elliot Norton and IRNE Awards. Additional Broadway productions include Jagged Little Pill; Waitress (also US National Tour and in London’s West End); Natasha, Pierre & The Great Comet of 1812; and Finding Neverland. Under Paulus’s leadership, A.R.T.’s club theater, OBERON, has been recognized annually as a top performance venue in the Boston area, and has attracted national attention for its innovative programming and business models.

As the professional theater on the campus of Harvard University, A.R.T. is committed to playing a central role in the cognitive life of the University, catalyzing discourse, interdisciplinary collaboration, and creative exchange among a wide range of academic departments, institutions, students, and faculty members. A.R.T. is engaged in a number of multi-year initiatives with partners at Harvard that explore some of the most pressing issues of our day, including collaborations with the Harvard University Center for the Environment to develop new work that addresses climate change and with the Healthy Buildings Program at the Harvard T.H. Chan School of Public Health to develop a Roadmap for Recovery and Resilience for Theater that prioritizes a commitment to ethics, equity, and anti-racism as a guiding principle. A.R.T. plays a central role in Harvard’s undergraduate Theater, Dance & Media concentration, teaching courses in directing, dramatic literature, acting, voice, design, and dramaturgy. A.R.T. staff also mentors students in the Harvard Radcliffe Dramatic Club working at the Loeb Drama Center and OBERON.

Dedicated to making great theater accessible, A.R.T. actively engages more than 5,000 community members and local students annually in project-based partnerships, workshops, conversations with artists, and other enrichment activities both at the theater and across the Greater Boston area.

A.R.T. acknowledges that its theaters are situated on the traditional and ancestral homelands of the Massachusett Tribe.