With Zeal and With Bayonets Only 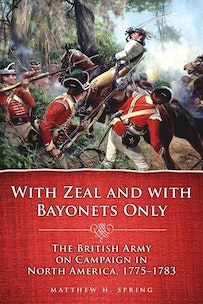 With Zeal and With Bayonets Only: The British Army on Campaign in North America, 1775-1783 by Matthew Spring

Today marks the 242nd anniversary of the Battle of Brandywine, a hard-fought victory for the British Army during their campaign to capture Philadelphia. This week’s Read the Revolution feature highlights Matthew H. Spring’s With Zeal and With Bayonets Only: The British Army on Campaign in North America, 1775-1783, an engaging study of how the British Army fought in battles such as Brandywine during the Revolutionary War. Lieutenant Richard St. George, the focus of the Museum’s 2019-20 special exhibition Cost of Revolution: The Life and Death of an Irish Soldier, served in the battle as part of the 52nd Regiment’s light infantry company and was wounded in the heel.

Cost of Revolution: The Life and Death of an Irish Soldier followed the untold story of Irish soldier and artist Richard St. George, whose personal trauma and untimely death provide a window into the entangled histories of the American Revolution of 1776 and the Irish Revolution of 1798. See Content

With Zeal and With Bayonets Only dispels many long-standing myths about the linear tactics and outdated strategies of the British Army in America. Spring instead shows how the British commanders and officers adapted to fighting against American riflemen and the Continental Army in woods and fields from Canada to Georgia. Their adaptations made the British Army an effective fighting force throughout the eight years of the Revolutionary War. Spring particularly emphasizes the heavy reliance on “Flank Battalions” (the grenadiers and the light infantry) to spearhead attacks and perform the bulk of the British Army’s fighting. As an officer in the light infantry, Richard St. George led troops at the battles of Cooch’s Bridge, Brandywine, and Paoli before he was wounded in the head during the initial fighting at Germantown in 1777.

The following except describes the men who served in the British light infantry and how they were employed in battle. It concludes with a quotation from Lieutenant Martin Hunter, a friend of Richard St. George’s and a fellow veteran of the Battle of Brandywine.

Along with the Jäger and light dragoons, the British light battalions performed the lion’s share of the army’s march security, outpost watch, and reconnaissance, duties that had to be performed even after the rest of the army had gone into winter quarters. As an example, after the two light battalions returned from a foraging expedition beyond the Schuylkill on the last day of 1777, they occupied the brick barracks at the northern limits of Philadelphia. This enabled them to succor the nearby chain of works that covered the city’s landward approaches, to patrol aggressively the neutral ground outside the city, and to spearhead any expedition made from within. As Sergeant Thomas Sullivan of the 2nd Battalion of Light Infantry put it, the light infantry’s post was “in the front going out, and the rear coming home.” Captain Sir James Murray expressed it similarly: “We have always something to do and something to expect; if atra cura is anywhere to be avoided, it is in a light infantry company in America.”

Like their officers, the enlisted men of the flank battalions were exceptional individuals, carefully chosen from among the regiments’ battalion companies. But at least in many corps, this selection process was seemingly undertaken with different criteria, depending upon whether the corps was on active service or not. Writing in Britain in 1781, former officer John Williamson asserted that, while grenadiers and light infantrymen were supposed to be appointed according to their “strength, size and courage” and their “spirit and alacrity” respectively, these qualifications were “seldom particularly attended to.” Instead, he complained, many regiments simply filled those companies with the tallest men (grenadiers) and with the shortest and youngest men (light infantry). Data from the annual reviews appear to confirm Williamson’s point. As just one example, when the 4th Regiment was reviewed in April 1774 shortly before embarking for America, the average heights of the grenadiers, hatmen, and light infantrymen were almost 5 feet, 11 inches; almost 5 feet, 8 inches; and almost 5 feet, 7 inches. The tallest grenadier, hatman, and light infantryman measured 6 feet, 2 inches; 6 feet; and 5 feet, 8 ½ inches.

Military theorists deplored this state of affairs. In 1768 military writer Captain Bennett Cuthbertson asserted that a grenadier company composed of men selected on the basis of “a full face, broad shoulders and well-proportioned legs,” as well as height, was “much superior in point of marching, and every sort of fatigue, to one, which only boasts of size.” As for the light company, Cuthbertson judged that it should “be composed of chosen men, whose activity and particular talents for that duty should be the only recommendation to their appointment.” Another military writer, Captain Thomas Simes, agreed. In 1777 he argued that the soldiers of the flank companies “should be men whose health, strength, and activity can most be depended upon; that are good marksmen; and in point of marching, etc. are superior to those who pique themselves of size: it is a mistaken opinion that size alone is a qualification for either. These men should be accustomed to move at the rate of four miles [in] the hour without being the least fatigued, and twenty-four miles a day when necessity demands it, without distress.”

During the American War, the practice of the corps on active service in the colonies seems, quite sensibly, to have reflected the theorists’ views. When it was necessary to transfer hatmen from the parent corps to the flank battalions, regimental commanding officers were directed to send only suitable men “fit for that service.” In the case of grenadiers, an imposing physique undoubtedly remained a prerequisite. But other criteria undoubtedly influenced the selection process, especially in the case of the light infantry. Untried recruits were not usually thought appropriate material, whatever their build or agility. For instance, to assist Captain Wolfe in completing the 40th Regiment’s light company in June 1777, Lieutenant Colonel Thomas Musgrave ordered the battalion companies’ commanding officers to create a pool of potential recruits b y selecting “two of the properest [sic] men they have, of a twelvemonth’s standing as soldiers in the regiment.” Moreover, surviving muster lists show that many men were returned from the flank companies to the battalion, as if they could not (or could no longer) meet the demands made of them. Of course, troublemakers or men liable to desert were not wanted. For instance, in May 1779 Clinton ordered the transfer of a number of NCOs and privates from the 57th Regiment’s light company to the battalion on the grounds that they had been guilty of behavior that “renders them unworthy of the distinction of serving in a flank of corps.”

On active service in America, proven physical stamina was certainly the most important criterion for transfer to the flank battalions, especially to the light infantry. This much is clear from the fact that these soldiers became renowned for their physical endurance. In bids to get into action at Harlem Heights, Germantown, and Monmouth, the grenadier battalions respectively “trotted about three miles without a halt to draw breath,” covered most of the five miles from Philadelphia “in a kind of half-running march,” and “ran for three miles without stopping.” As for the light infantry, in mid-June 1776, as the rebel invaders of Canada fled up the Richelieu corridor, three light companies jogged three miles to St. Johns in pursuit of the enemy rearguard. Similarly, at the action outside Savannah, rebel colonel George Walton observed Captain Sir James Baird’s light infantry as they completed their wide outflanking march through the swamp on the rebel right, “hopping over the little difficulties with great agility.” In his account of the failed expedition to destroy Lafayette’s division at Barren Hill, Martin Hunter claimed that the flank battalions had marched an astonishing sixty miles in twenty-four hours without losing a single man. His explanation for this was that “[t]hey were in good wind, as we generally marched out of Philadelphia every day ten or twelve miles to cover the market people coming in.”

The flank battalions – and particularly the light infantry – were composed of tough veterans, hardened by constant, severe, and successful active service. And, at least in the northern campaigns, British commanders employed them to maximum effect on the battlefield.