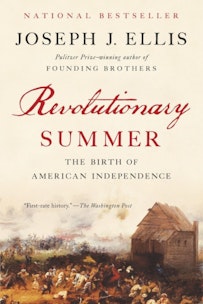 Revolutionary Summer: The Birth of American Independence by Joseph Ellis

The first major battle of the American Revolution following the Declaration of the Independence—the Battle of Long Island—erupted on August 27, 1776. The Continental Army was positioned to protect Manhattan from a British advance from Long Island. When the moment came, General George Washington found his army outflanked by British troops. More than a thousand American soldiers were taken prisoner, and hundreds were killed, while few British casualties were inflicted. The Continental forces faced near certain defeat until Washington decided to coordinate a risky retreat of his remaining troops. As Joseph Ellis explains in his book Revolutionary Summer, the success of this maneuver, which likely saved the fledgling nation, came from the combined result of a series of lucky breaks for the Americans—and puzzling fumbles made by the British.

Deception was the essential ingredient in the evacuation plan. Washington issued a General Order to assemble all ships and flat-bottomed boats on Manhattan and Long Island, purportedly to ferry additional troops over from New Jersey. This allowed Colonel John Glover and his Massachusetts regiment of Marblehead fishermen and seamen to gather the fleet to evacuate Long Island under the pretense of reinforcing it. The very sight of Glover and his colorfully attired troops, all moving with the disciplined precision acquired from years of experience aboard ships at sea, made an immediate impression: 'These were the lads,' noted one young officer from Pennsylvania, 'that might do something.' What they were in fact about to do was show this army of amateur soldiers how a regiment of seasoned seamen staged a rescue operation at night.

Only a few of the officers and none of the enlisted men knew that an evacuation was under way. In some units, when ordered to go 'under arms with packs,' the troops assumed they were about to attack the British trenches and proceeded to make out their wills in anticipation of certain death. Joseph Plumb Martin remembered the sudden code of silence: 'We were strictly enjoined not to speak, or even cough. All orders were given from officer to officer, and communicated to men in whispers.' Tench Tilghman, a young lieutenant soon to become one of Washington's most trusted aides, reported that whole regiments moved to the rear without knowing their destination: 'The thing was conducted with so much secrecy that neither subalterns or privates knew that the whole army was to cross back again to New York.'

The tactical retreat of an entire army currently engaged with a larger enemy force is so difficult to orchestrate because units have to be removed piecemeal, in staggered fashion, leaving a sufficient complement of troops to hold the perimeter. Timing, therefore, has to be precise, and the remaining troops need to spread out to replace those just evacuated. A nearly fatal blunder occurred on Brooklyn Heights midway through the evacuation when Mifflin received an order to withdraw all his troops. The order was a mistake, since Mifflin's men were supposed to leave last and their withdrawal would leave the American front fully exposed. Mifflin questioned the order but reluctantly obeyed it.

As he led his troops back towards the ferry, Washington rode up and demanded to know what Mifflin was doing. 'Good God! General Mifflin, I am afraid you have ruined us,' he shouted. Mifflin, understandably exasperated and confused, explained the communication error, then led his troops back to the trenches. Though the American position had been undefended for over an hour, the British never noticed.

This piece of good fortune was more than matched when the northeastern storm subsided and the winds shifted to the southeast, which greatly facilitated the movement of Glover's boats across the East River. The weather change should have prompted the appearance of British warships on the water, which would have transformed the American evacuation into a full-scale massacre, since the overloaded rowboats were defenseless. But Lord Howe, uncharacteristically, never noticed the wind shift and never brought the British fleet into play.

He was preoccupied with dinner conversation aboard the Eagle, his flagship, where the two captured American generals, Stirling and Sullivan, were his guests, and Lord Richard was fixated on discovering whether the recent humiliation of the Continental Army might have changed their minds about his proposals for a peaceful end to the rebellion. Like his brother, if not more so, Richard Howe's fondest hope was for diplomatic reconciliation rather than military victory, and at this fateful moment that was where his fullest attentions were focused.

The gods smiled on the American escape one final time on the morning of August 30. The last troops to evacuate were most at risk, in part because no one remained in the rear to cover their retreat, in part because they would have to sneak out in broad daylight. Major Tallmadge remembered it well many years later:

As the dawn of the next day approached, those of us who remained in the trenches became very anxious for our own safety ... At this time a very dense fog began to rise, and it semmed to settle in a peculiar manner over both encampments. I recollect this peculiar providential occurrence perfectly well; and so very dense was the atmosphere that I could scarcely discern a man at six yards' distance ... In the history of warfare I do not recollect a more fortunate retreat.

As Tallmadge was being rowed across, he looked back to see Washington stepping into the last boat to leave Long Island. It was the stuff of legend. In all nearly 10,000 men were safely ferried to Manhattan with only three stragglers lost. The planning had to be precise, the officers and men needed to behave with uncommon courage, the winds and river currents had to be properly aligned, the Royal Navy had to be negligent, and, finally, a dense fog had to make a providential appearance at the end. And all these ingredients had to come together in the proper sequence. Although successful retreats seldom win wars, in this instance the evacuation of Long Island meant that the Continental Army would live to fight another day. One could be forgiven for believing that 'The Cause' could never die.