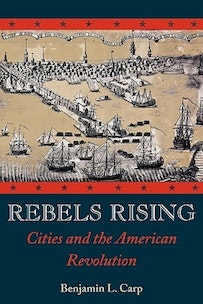 Rebels Rising: Cities and the American Revolution by Benjamin Carp

Benjamin L. Carp's Rebels Rising: Cities and the American Revolution looks at the important role urban meeting spaces played in igniting the colonists' desire for change in the decades leading up to the War of Independence. Today's excerpt explains the history of "out of doors" politics as the public opinion of everyday people gained increasing political influence.

In the middle of May 1776, only four colonies of the thirteen in rebellion—all of them in the Mid-Atlantic—had not granted their delegates permission to vote for American independence in the Continental Congress. Though Congress was meeting in Philadelphia, Pennsylvania's own Assembly had instructed its delegates not to vote for independence—and in a recent election, the candidates in favor of independence had suffered a narrow defeat. Then on May 8, Philadelphians heard cannons booming on the Delaware River. They learned that the king was sending Hessian mercenaries to crush the American rebellion. Suddenly they began brushing up on the writings of Thomas Paine and Massachusetts delegate John Adams. On May 20, four or five thousand people gathered in the rain in the State House Yard. Looming over them was the State House, where the Continental Congress met and where Pennsylvania's leaders had governed the province for two generations. In the Yard, the crowd denounced the Assembly's instructions to the province's congressional delegation and called for a constitutional convention that would supersede the Assembly. Beaten, the Assembly had little choice but to allow the delegation to vote as they saw fit on the question of independence. Soon afterward the Assembly itself dissolved, and Pennsylvanians set about establishing a new government.

Philadelphians mobilized to question and then reject the formal authority of Parliament, the king, and their provincial Assembly. Much of this activity took place 'out of doors,' or outside of formal legislative sessions. Philadelphians embraced independence more slowly than the residents of many other cities, partly because of the entrenched power that Pennsylvania's leaders held inside the State House. From this towering edifice, the governing forces of the province had consolidated their power in an oligarchic system and projected this power over a wide distance. The king and Parliament in London also projected their power through their emissaries in Pennsylvania's government. While Pennsylvanians respected the strength of the State House, they also challenged the authority of their government. During the 18th century they gradually began to chip away at the power of [William] Penn's successors and the Assembly. The provincial leaders of Pennsylvania could see these challenges unfolding in the open spaces that lay before the city's public buildings. Politics 'out of doors,' literally and metaphorically, became a significant factor in Philadelphia's political life in the decades before the American Revolution.

The use of the phrase 'out of doors' to refer to extraparliamentary activity probably arose during the middle of the 17th Century. Before 1640, parliamentary proceedings in England were largely secret, and public opinion had little role in government. Critics of government did find some outlets for raising political awareness such as ribald verses, leaks from politicians, and some limited petitioning. Nevertheless, communication between 'indoor' and 'outdoor' political actors was limited. English people began speaking and writing even more openly about politics out of doors during the English Civil Wars, as censorship lifted and the production of printed material exploded. Petitions to Parliament and public opinion 'without-doors' increasingly became sources of politicians' fears and concerns. After 1660, people were regularly discussing politics in taverns. This exchange of public opinion in turn contributed to party politics in England. Members of political parties found themselves compelled to respond to the opinions of people out of doors.

For much of the 18th century, the legislatures of Great Britain and Pennsylvania were essentially under one-party rule or 'political oligarchy.' A vibrant culture of opposition, the 'politics of the excluded,' developed as the wider populace found room for political expression in the streets, taverns, clubs, churches, and the press. During this period, Henry St. John Bollingbroke wrote that the people had a good effect on Parliament by restraining its excesses. 'The cries of the people, and the terror of approaching elections, have defeated the most dangerous projects for beggaring and enslaving the nation; and the majority without doors hath obliged the majority within doors to truckle to the minority.' The politics of the people without doors, in other words, could counteract an entrenched cabal within Parliament.

Legislators and their supporters sometimes criticized their opponents for acting in secret, underhanded ways 'out of doors,' outside the purview of an orderly parliamentary debate... Legislators sometimes spoke of grumblings 'out of doors' as a way of taking the pulse of the people they represented-or as a way of dismissing them as 'rabble.' Members of the so-called governing classes often expressed disdain for popular politics and its practitioners; they referred to 'the poor unthinking and deluded multitude' or 'the mob,' as distinct from propertied men. Alternately, politicians might invoke 'the people' as an inclusive term that applied to all adult men. Those who were themselves outside of the legislature could claim the mantle of righteousness if their opinions had currency 'out of doors,' especially when they perceived the legislature itself as unrepresentative of the people's interests. The different uses of the phrase 'out of doors' cut to the very heart of important questions about representation, openness, sovereignty, and public opinion.

Politics out of doors could encompass petitioning: expressions of public opinion in speeches and in print; political interactions in places such as the tavern; machinations and negotiations outside of Parliament; and crowd action, from parades to riots. Many of these activities flourished especially in cities... Much of urban political mobilization took place out of doors during the imperial crises in America: crowd action on the waterfront and in the streets and, more broadly, the discussions and actions that unfolded outside courthouses, legislative assemblies, and Parliament."