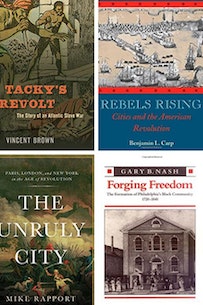 Cities were small but powerful places during the American Revolution. Less than four percent of the 2.5 million people in mainland British North America lived in a city in 1776. Most of those cities were small. Only four had populations above 10,000 people, including Boston, New York, Philadelphia, and Charleston. Philadelphia was exceptional for its size. At 30,000 residents it was the largest city in mainland British North America. However, like every American city it included a diversity of people, faiths, and pursuits.

Because of this mingling of peoples and opinions, cities became spaces for citizens to make their political voices heard. Before and during the Revolution, cities served as vital civic arenas where political ideas and aspirations were publicly expressed by people from a variety of backgrounds. Cities were – and still are – places where a society’s political imagination of what is possible takes root, finds commonality, and builds unity.

Sometimes they were also places where differences of opinion erupted into violence. Boston, thanks to the Massacre and Tea Party, is often associated with such violence, but from the mid-1760s until the outbreak of the Revolutionary War cities up and down the coast saw violent eruptions. Stamp Act protests in cities from Portsmouth, New Hampshire, down to Savannah, Georgia, targeted government offices and officials throughout 1765 into 1766. Enslaved people in Charleston, South Carolina, took to the streets demanding liberty and in Jamaica left urban areas for the interior to join uprisings against their enslavers during the 1760s. Riots broke out in New York City over the Quartering Act in 1766. From the end of the 1760s through the early 1770s, shopkeepers and merchants were attacked when they defied non-importation agreements. At the same time Massachusetts militia were firing on the British Army outside of Boston, Virginians armed and marched on Williamsburg to reclaim gunpowder taken by the royal governor. Almost all American cities were the seat of government, making them the seat of protest too.

Here are nine suggested readings from our collection of Read the Revolution book excerpts addressing the role of cities in the American Revolution.

While much of Brown's work focuses on uprisings in remote plantations of Jamaica, he also discusses the involvement of refugees from the Island's towns and commercial areas in the rebellion. He encourages readers to think about Tacky’s Revolt (1760-1761) not only as a local insurrection, but as a major battle:

"…that was part of four wars at once: it was an extension of wars on the African continent; it was a race war between black slaves and white slave holders; it was a struggle among black people over the terms of communal belonging, effective control of local territory, and establishment of their own political legacies; and it was, most immediately, one of the hardest-fought battles of that titanic global conflict between Britain and its European rivals that would come to be known as the Seven Years’ War."

Read an excerpt that describes the enslaved African people brought to the Caribbean and known in the period as the Coromantees. While often considered a homogenous people with rebellious tendencies by white slaveholders, Brown reveals how community building among Coromantees, who had been removed from their original homeland, affected how they waged war against slavery.

Carp looks closely at the important role public meeting spaces in British North America’s most populous cities played in igniting the colonists' desire for change in the decades leading up to the Revolutionary War.

Read an excerpt explaining the history of "out of doors" politics, outside of formal legislative sessions in places such as public gatherings, taverns, and churches, as the public opinion of everyday people gained increasing political influence.

Gerald Horne, The Counter-Revolution of 1776: Slave Resistance and the Origins of the United States of America (NYU Press, 2014)

Horne explores, among other dynamics, the powerful influence of the capture of the city of Havana, Cuba, in 1762 for enslaved people in British America and the emerging imperial conflict between the colonies and London.

Read an excerpt that explains how enslaved Africans played an important role in igniting the rebellion that would become the American Revolution, a conflict he traces back to crucial turning points like the Glorious Revolution of 1688 and its long-term impact on the slave trade.

Israel presents the American Revolution as the first of a series of world-shaking democratic revolutions that swept the Atlantic World in the 18th and 19th centuries. Radical ideas of self-government, liberty, and republicanism challenged the Old World institutions of monarchy, aristocracy, and religious authority, transforming the modern world.

Read an excerpt investigating this global spread of enlightenment ideas and how cities played a role in that spread.

With its emerging abolition movement, Nash argues, Philadelphia was an appealing locale for runaway slaves, free blacks, and Caribbean refugees in the decades before and after the Revolutionary War. In the city, free blacks worked to establish their own independent churches, form abolition and resettlement societies, and to secure their own livelihoods against a backdrop of growing white hostility into the 19th century.

Read an excerpt detailing this period in African American history as generations of free blacks pursued a secure and dignified existence based on self-employment and an intricate system of self-support.

Cassandra Pybus, Epic Journeys of Freedom: Runaway Slaves of the American Revolution and Their Global Quest for Liberty (Beacon Press, 2006)

Enslaved African Americans in North America found themselves in an unusual situation during the War for American Independence. The new American Republic touted liberty and freedom, but this did not extend to all members of society. Pybus personalizes the wartime stories of black men and women who fled their American masters to seek freedom, and traces their footsteps around the globe.

Read an excerpt highlighting many individual experiences in Charleston, South Carolina, including Scipio Handley, a self-employed black fish seller who was caught carrying messages for the embattled royal governor of South Carolina, Sir William Campbell, late in 1775, and escaped execution to join a community of runaways on Sullivan's Island, under the control of British warships in Charleston Harbor.

Rapport shows how cities became contested ground and hotbeds for reformers and radicals. Ships, travelers, printers, churches, and taverns churned ideas about political change amongst large, dense, and diverse urban populations. Government buildings, streets, and public spaces became arenas of conflict. Rapport argues that those spaces shaped how revolution took hold or did not take hold in each city.

Read an excerpt characterizing London’s conservative response to the American Revolution as Rapport describes how Londoners sought political reforms but did not call for a British revolution or a republic.

This edited volume offers a comprehensive history of Philadelphia by exploring one of America's most vital, interesting, and illustrious cities. The book traces the political, artistic, physical, and social evolution of the city and illuminates its very special spirit – how it has changed in response to the demands of three centuries, and how, in many respects, it has remained the same as it was in William Penn's day.

Read an excerpt about how as war crept up on Philadelphia in 1776, the city's leaders and residents prepared for a potential invasion by British forces, and how those events of 1776 led an uneasy population to shore up their defenses and eventually flee.

There are two popular interpretations of the shooting that took place in Boston in March 1770: the first takes after Paul Revere’s rendering of a bloody, violent massacre — the Boston Massacre — while the second derives from John Adams, who, as the lawyer defending the soldiers in court, portrayed the soldiers as the victims and not the perpetrators of the event. Zabin suggests there is a third interpretation: a story of the people, shedding light on the relationships, connections, and sometimes struggles of the men and women living and working in Boston.

Read an excerpt about British Ensign John Melliquet of the Twenty-Ninth Regiment and his relationship with Bostonian Hannah Newman, which speaks to the family connections forged between Bostonians and Britons in the early years of the Revolutionary era, and how those connections came into question in the years following the Boston Massacre. 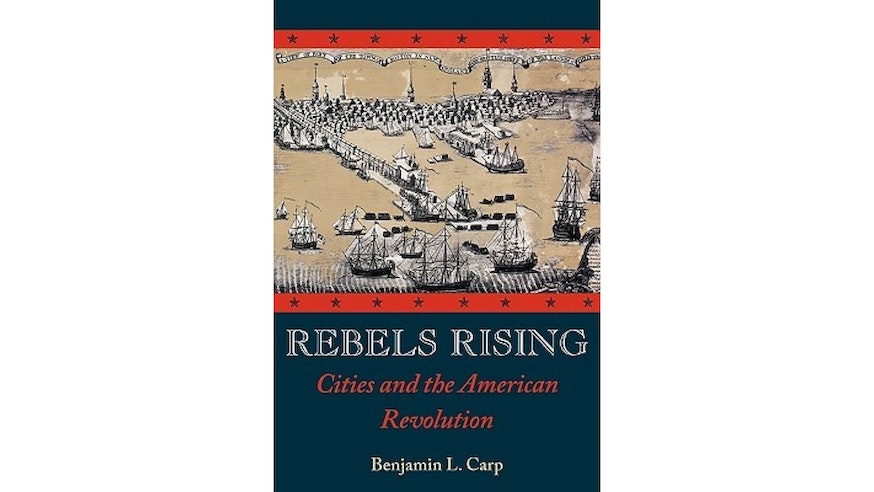 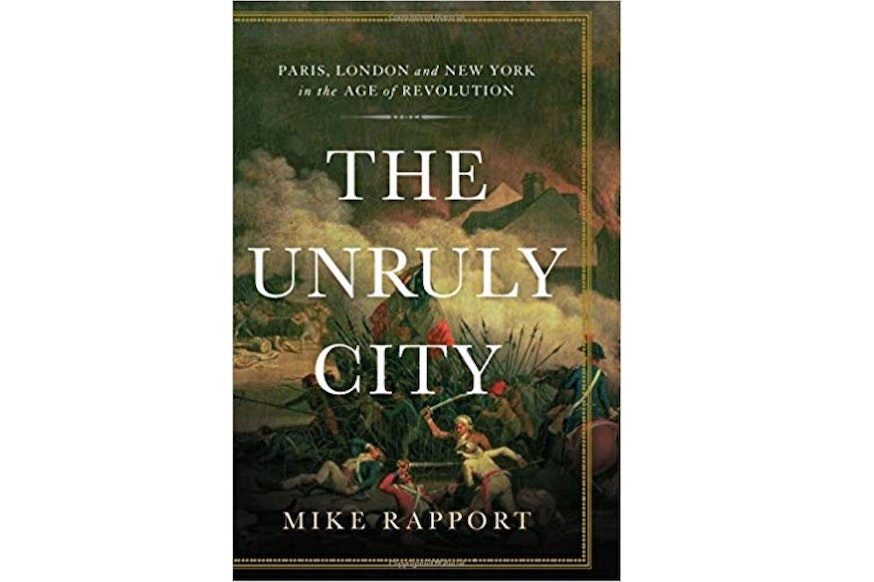 This excerpt from Mike Rapport shows London’s response to the American Revolution - Londoners sought political reforms but not a British revolution.
Read More