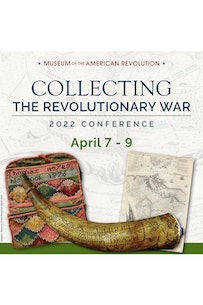 Purchase books from past Read the Revolution features, Museum author events, and more online and in the Museum Shop.

How were military objects created, used, and collected during and after the Revolutionary War? What personal memories and meanings did these objects hold for the War’s survivors, veterans, and later generations who sought to save them as relics of the Revolutionary era?

The Museum’s 2022 Conference on Collecting the Revolutionary War from April 7-9 brings historians and museum professionals together in-person and online to discuss how ideas about these objects have influenced collecting and public history over the past 250 years. While the three days of sessions will aim to inspire a scholarly investigation of the meaning of Revolutionary War collections, conference presenters have authored a wide range of recent articles, exhibitions, and books, a selection of which are featured in this week's Read the Revolution.

The 2022 Conference of Collecting the Revolutionary War was held at the Museum to discuss how ideas about Revolutionary-era objects have influenced collecting and public history over the past 250 years. See Content

Portrait of a Woman in Silk: Hidden Histories of the British Atlantic World (Yale University Press, 2016)

Through the story of a portrait of Anne Shippen Willing, the Philadephia-born granddaughter of Philadelphia’s first mayor Edward Shippen, painted in 1746 by Robert Feke, Zara Anishanslin presents the transatlantic history of the Willing’s gown and its design by Londoner Anna Maria Garthwaite.

Excerpt
At first glance, this portrait of a woman in silk seems to communicate a straightforward message of social status. It appears to fit perfectly where it is displayed today, in the period rooms at Winterthur Museum, hanging above high-end furtnirue and decorative arts owned and used by other colonial elites. It seems to be yet another example of a colonial sitter posing as a refined member of transatlantic British culture, signaling her gentility (despite her distance from the mother country) through the metropolitan luxry goods she wears. But this portrait visualizes more than just an image of a long-dead woman, and it tells more than a simple narrative of status and emulation. Rather, this thing fashioned of oil paint on a framed convas is a revelatory object, a seemingly typical portrait that narrates a much more complex story about global economy and individual lives in an age of empire.

To compliment and celebrate the DAR’s 125th anniversary in 2015, the Remembering the American Revolution: 1776-1890 special exhibition and catalog brought together the expertise of four DAR Museum curators: Heidi Campbell-Shoaf, Olive Graffam, Alden O’Brien, and Patrick Sheary. More than 100 objects from the DAR Museun collection, from paintings and furniture to clothing and needlework, were featured because of their connection to how people preserved, made, and bought items in order to retain a connection to the war.

Excerpt
Many first time visitors to the DAR Museum walk off the street and through our doors expecting to see objects from the American Revolution. One hundred and twenty-five years ago, when DAR founders created the museum, they did not specifically say it was to be for the preservation of Revolutionary War-era objects alone. The founders had a broader scope in mind, and we grew into a decorative arts museum with an emphasis on the American home. Nevertheless, some of the earliest items given to the museum had some sort of Revolutionary connection....

Get biweekly Read the Revolution featured excerpts right to your inbox!

The nine known swords owned by George Washington have long fascinated collectors. This book by Erik Goldstein, Stuart C. Mowbray and Brian Hendelson illustrates and discusses each sword, its creation, and its provenance in private and public collections for the first time.

Excerpt
Washington’s swords were considered important enough to warrant particular attention in his will, being specifically set aside for the younger men of his family. Evidence of the respect that Washington’s newphews felt for their famed uncle endures to this day. After remaining in the hands of descendants for generations, all five swords survive and are now on display at institutions of national significance. The other known Washington swords, with a single exception, are also in the care of prominent museums, enrusing their preservation for future generations. Examined together in great detail and presented in full color for the first time, this is their story.

Historic Real Estate: Market Morality and the Politics of Preservation in the Early United States (University of Pennsylvania Press, 2020)

From Indigenous mounds in the Ohio Valley to Independence Hall in Philadelphia; from Benjamin Franklin's childhood home in Boston to St. Philip's Episcopal Church in Charleston, South Carolina; from Dutch colonial manors of the Hudson Valley to Henry Clay's Kentucky estate, early advocates of preservation strove not only to place boundaries on competitive real estate markets but also to determine what should not be for sale, how consumers should behave, and how certain types of labor should be valued. Before historic preservation existed as we know it today, many Americans articulated eclectic and sometimes contradictory definitions of architectural preservation to work out practical strategies for defining the relationship between public good and private profit. Martinko shows how Americans in the fledgling United States pointed to evidence of the past in the world around them and debated whether, and how, to preserve historic structures as permanent features of the new nation's landscape.

Excerpt
After the War for Independence, many residents of the United States looked to sites associated with the revolution and its leaders to define the new nation and its citizenry. They attended anniversary celebrations that enlivened battlegrounds with living memories of war and laid monuments to military engagements and the birthplaces of their leaders. Tourists visited these sites to pay respect to men defined as national martyrs and to experience the power of place to connect them to the past. More broadly, travelers and antiquaries traversed the land looking for material evidence of local history. Indigenous Americans and settler colonists both created physical markers of place invested with memories of past events, especially of colonial violence. Yet these Americans recognized a crucial difference between constructing new monuments to the past and maintaining historic architectural features themselves...

Master historical painter Don Troiani and historian Eric Schnitzer, with a foreword by Dr. Matthew Keagle, combine their talents to chronicle the Battles of Saratoga beginning in June 1777, when the armies prepared to face off, to the surrender of the British Army in October 1777.

Excerpt, Keagle
The campaign of 1777 in the north is not unfamiliar territory. As one of the most discrete military campaigns of the Revolution, one with a discernible beginning and end., with profound consequences, it has long attracted the attention of artists, scholars, and the general public... Complementing Schnitzer’s rigorous and approachable content, [Don] Troiani has with his brush so ably reconstructed these moments and individuals. His scenes and figures allow one’s imagination to activate the text... Augmenting all of this is the collaborators’ decision to enhance this volume with photographs of original artifacts from this groundbreaking campaign. Drawn from collections on both sids of the Atlantic, these serve for Troiani’s art, like Schnitzer’s footnotes, as the material documentation for the historical scenes. The combination of interpretation through art and atext and documentation through footnotes and artifacts solidifies this volume’s place in the historiography of the campaign that defines the Revolutionary War...

Excerpt, Schnitzer
...while I place significant focus on the strategic aspects of the campaign, I give little attention to the biographies of its participants. Instead, I provide a new type of military history that spotlights logistical, tactical, foodway, and military personnel study. Too often, these aspects are relegated to stereotypes that are completely inaccurate. Further, although only very rarely given consideration in traditional histories, material culture is given some focus in this book. Artifacts matter. Not only do original objects provide tangible connections to the past in a manner tha manuscripts are sometimes unable to do, but military material culture had direct relevance to the way war was waged and battles fought.

Excerpt
The Concord Museum collection was begun in the 1850s by Cummings Davis (1816-1896). The collection originally consisted of colonial artifacts with carefully recorded local histories. Within a few years, his collection was on view to visitors; Henry Thoreau wrote of a "visit to Mr. Davis's museum" in 1860. Thoreau gave Davis several things for his collection, and after Thoreau's death in 1862, his sister Sophia Thoreau passed along to Davis some of the most significant Thoreau objects. In 1886, a group of Concordians formed the Concord Antiquarian Society (now the Concord Museum) to care for the collections. 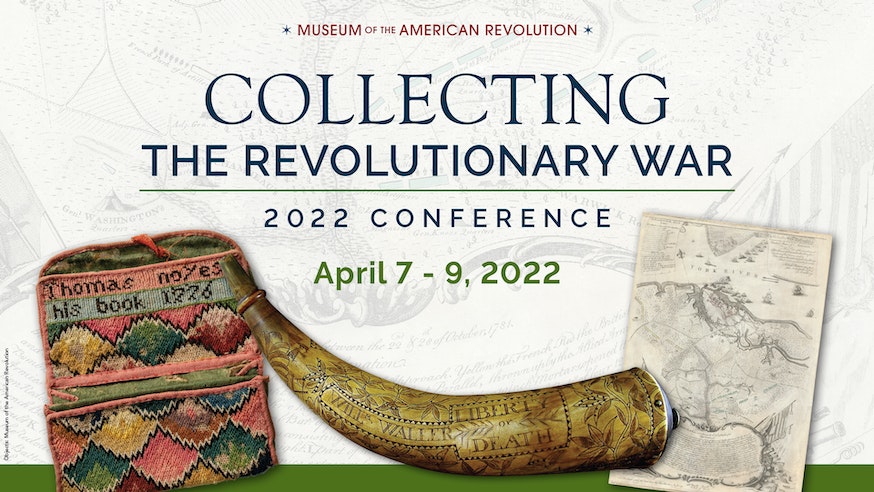 The 2022 Conference of Collecting the Revolutionary War was held at the Museum to discuss how ideas about Revolutionary-era objects have influenced collecting and public history over the past 250 years.
Read More

April 7-9, 2022
The 2022 Conference of Collecting the Revolutionary War will be held at the Museum to discuss how ideas about Revolutionary-era objects have influenced collecting and public history over the past 250 years.
Go to Event