How were military objects created, used, and collected during and after the Revolutionary War? What personal memories and meanings did these objects hold for the War’s survivors, veterans, and later generations who sought to save them as relics of the Revolutionary era?

The 2022 Conference on Collecting the Revolutionary War brought historians, museum professionals, and collectors together to discuss how ideas about these objects have influenced collecting and public history over the past 250 years. With topics in material culture ranging from family and national treasures to battlefield archaeology, the 2022 Conference on Collecting the Revolutionary War explored the first generation of collectors in the 1770s, early institutional collections founded in the 1800s, and more recent discoveries about these wartime artifacts and their influence on historical interpretation in collections, exhibitions, and digital initiatives today. This conference aimed to inspire a scholarly investigation of the meaning of Revolutionary War collections and to deepen curatorial conversations about how priorities in collecting should fit into upcoming commemorations of the 250th anniversary of the Revolutionary War. 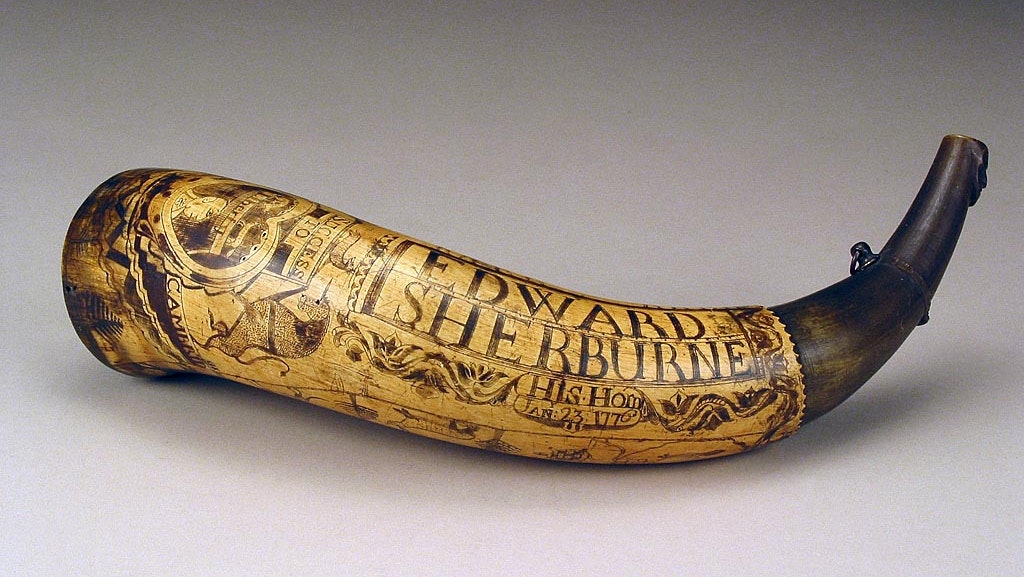 ﻿In “Revealing the Culture of Conflict: Engraved Powder Horns from the French and Indian War and the American Revolution,” Philip Zea, President Emeritus at Historic Deerfield, presented the world of the citizen soldier through the cultural meanings of powder horns and related equipment. An exhibition and catalog in commemoration of the 250th anniversary of American Independence are in production at Historic Deerfield slated to debut in April 2025.

The keynote was preceeded by an introduction and comment by M. Denise Dennis, President & CEO, Dennis Farm Charitable Land Trust, on "A Powder Horn in the Family: The Gershom Prince Powder Horn." 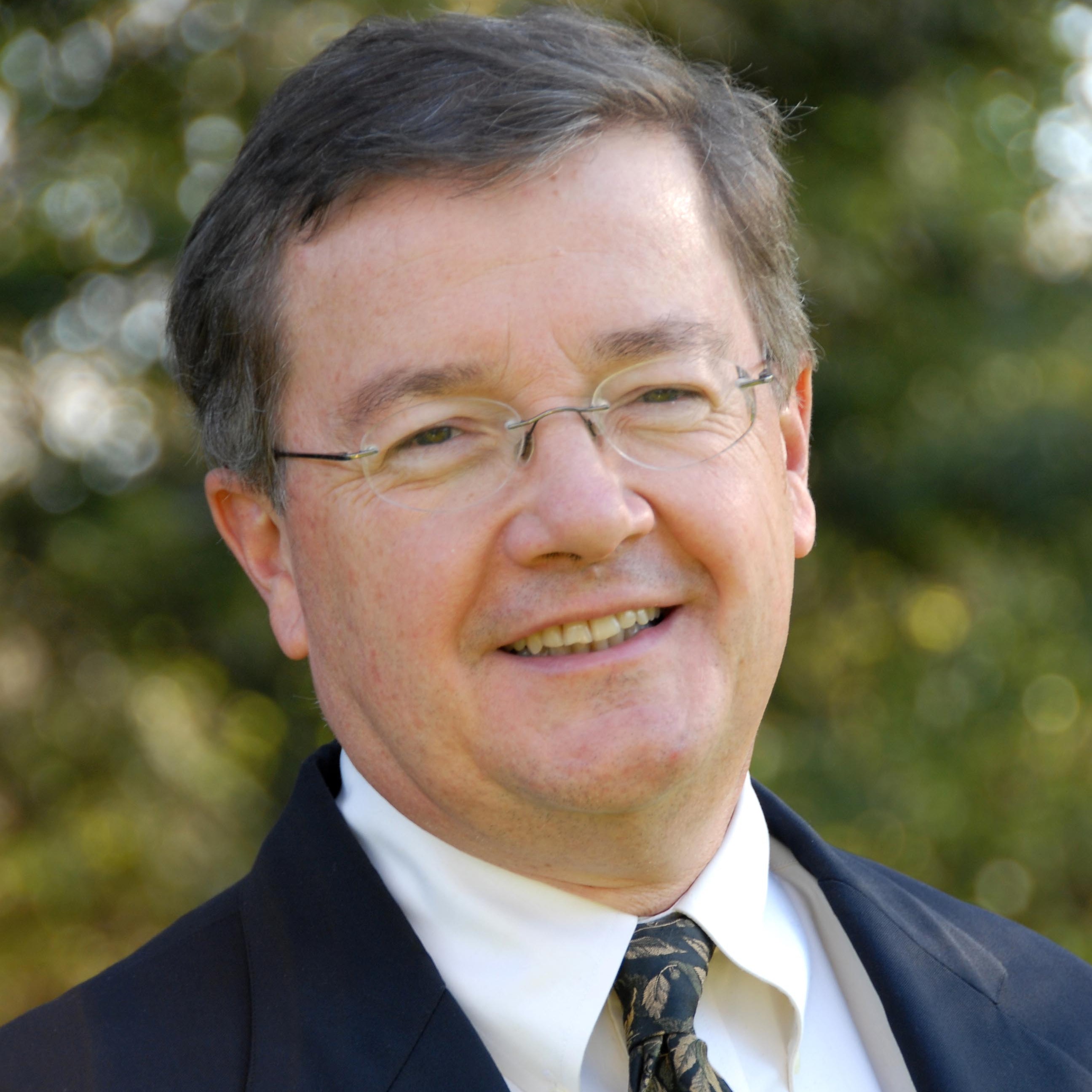 Philip Zea became President & CEO of Historic Deerfield, Inc. in Deerfield, Massachusetts, in 2003. He worked as Vice President for Museums and Collections at the Society for the Preservation of New England Antiquities (now Historic New England) in Boston between 2001 and 2003 and prior to that as Curator of Furniture at the Colonial Williamsburg Foundation in Williamsburg, Virginia. He was employed previously by Historic Deerfield for eighteen years, concluding as Deputy Director and Chief Curator. Zea has also been a staff member of the New Hampshire Historical Society, where he is now on the board of trustees. He has consulted for many museums on the topics of early furniture, clocks, engraved powder horns and historical interpretation. A New Hampshire native, Zea holds degrees from Wesleyan University, Middletown, Connecticut, and the Winterthur Program in Early American Culture at the University of Delaware. He is the 2009 recipient of the Award of Merit from the Antiques Dealers’ Association of America (A.D.A.) and the 2017 President’s Award at Old Sturbridge Village where he began his career in 1974. Zea is a former board member of Old Salem Museum and Gardens in North Carolina, the Decorative Arts Trust, the George Washington Foundation in Fredericksburg, VA., and the Enfield Shaker Museum in New Hampshire. He has lectured and written widely, including Clock Making in New England, 1725-1825: An Interpretation of the Old Sturbridge Village Collection (1992), with Robert C. Cheney; The Dunlap Cabinetmakers: A Tradition in Craftsmanship (1994), with Donald Dunlap; and most recently with Jean Burks for the Shelburne Museum, Rich and Tasty: Vermont Furniture to 1850 (2015), which won the 2016 Honor Book Award from Historic New England.

Katie McKinney
Margaret Beck Pritchard Associate Curator of Maps & Prints, Colonial Williamsburg
Talk: "'And, indeed what is the history of a country without maps?': The Legacy of Sebastian Bauman’s Plan of the Investment of Gloucester and York"

Philip Mead
Chief Historian and Curator, Museum of the American Revolution
Talk: "'The companion of my sore fatigues': Collecting and Preservation Among Soldiers and Other Combatants of the Revolutionary War"

Andrew Outten
Society of the Cincinnati

Scenes from the Conference 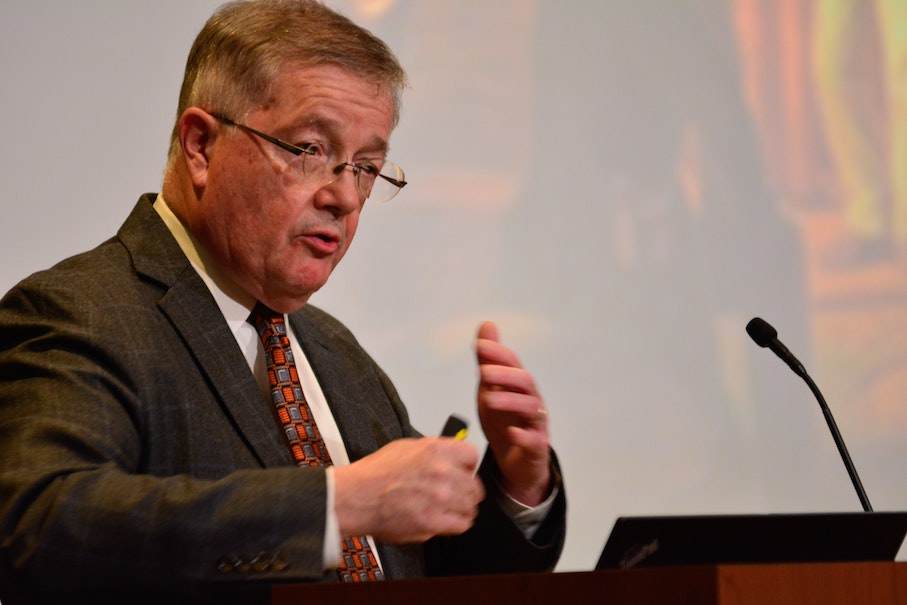 1/7
Philip Zea of Historic Deerfield delivers the opening keynote at the 2022 Conference on Collecting the Revolutionary War. 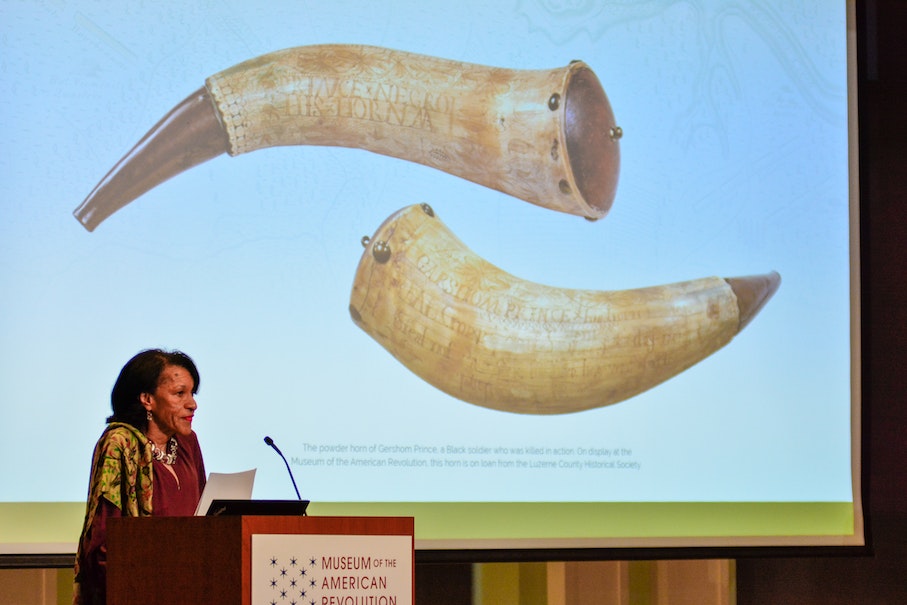 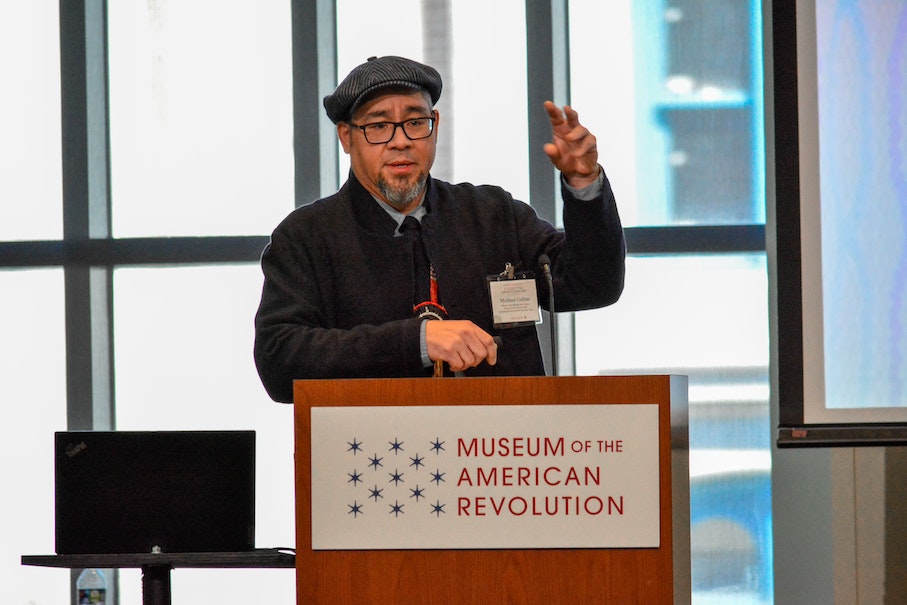 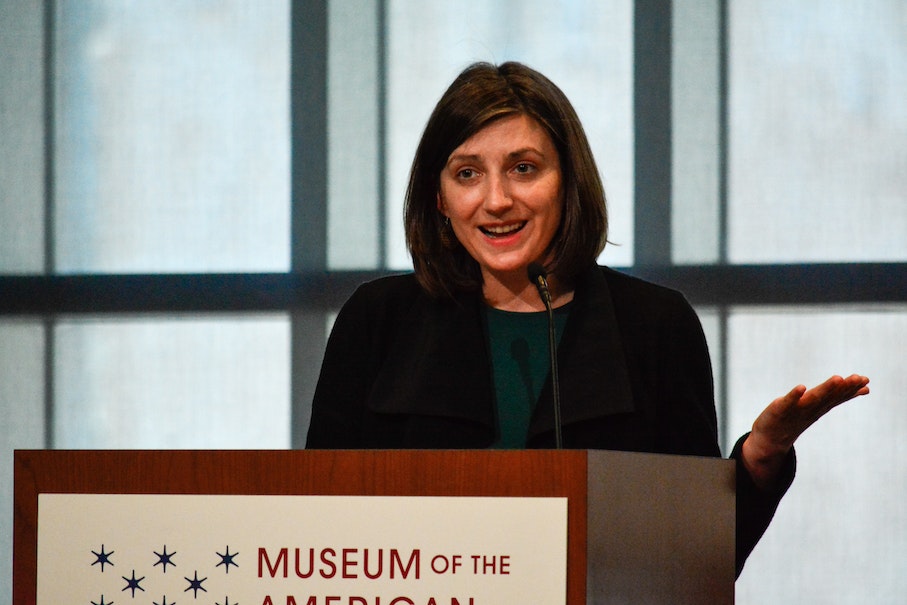 4/7
Dr. Whitney Martinko of Villanova University presents at the 2022 Conference on Collecting the Revolutionary War. 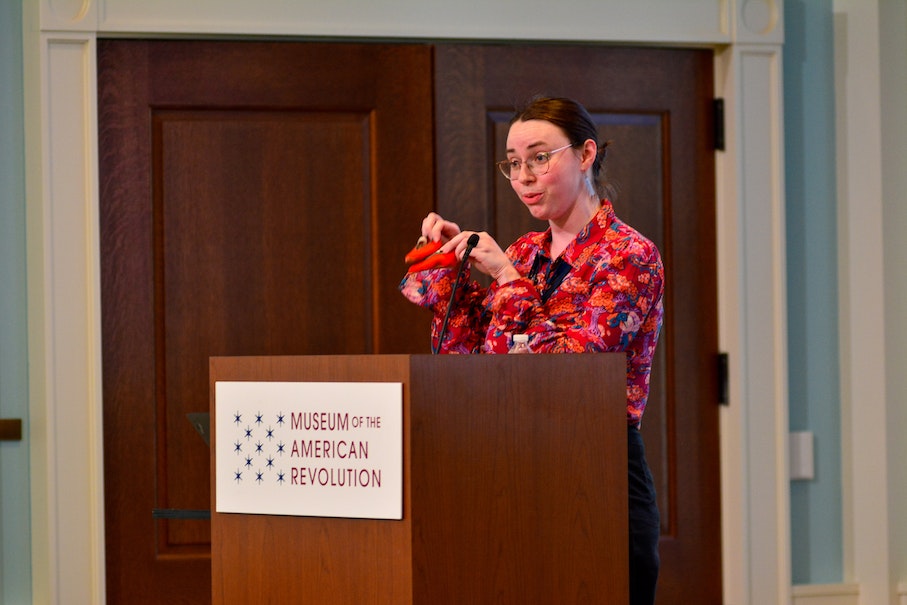 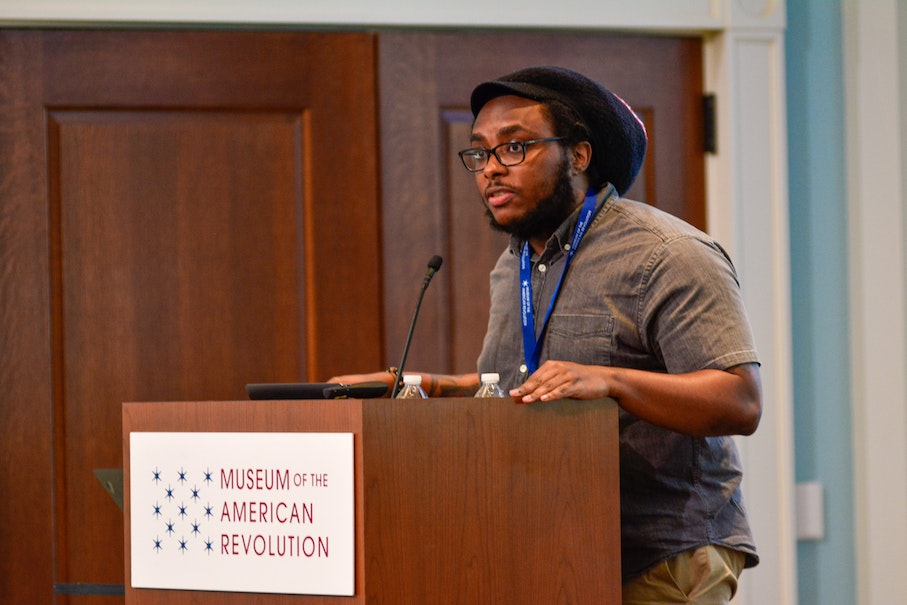 6/7
Adam McNeil of Rutgers University presents an Artifact Flash Talk at the 2022 Conference on Collecting the Revolutionary War. 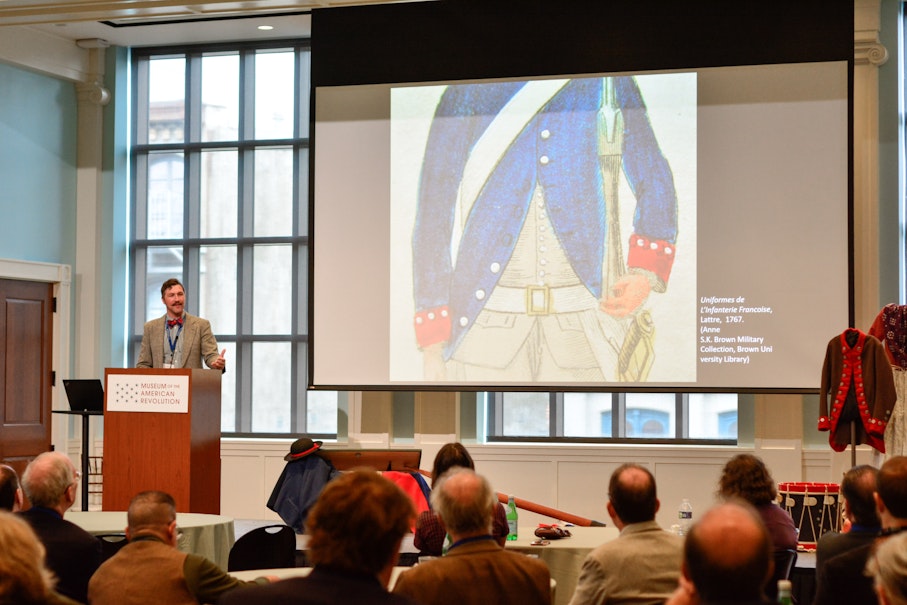 7/7
Dr. Matthew Keagle of Fort Ticonderoga presents at the 2022 Conference on Collecting the Revolutionary War.

With special thanks to our sponsors, Freeman's, Bonhams Skinner, and American Battlefield Trust, for their support.