Our Lives, Our Fortunes, and Our Sacred Honor 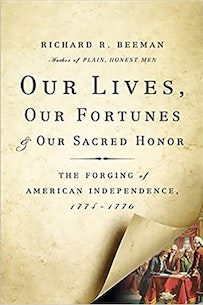 Our Lives, Our Fortunes and Our Sacred Honor: The Forging of American Independence, 1774-1776 by Richard Beeman

Independence Day wasn't always a time of celebration. On July 4, 1776—the day the Declaration of Independence was approved by the Second Continental Congress—the prevailing mood was trepidation and fear. In Our Lives, Our Fortunes, and Our Sacred Honor, author Richard Beeman reminds us that the original Independence Day was not viewed so much as a new beginning but as a prelude to full-scale war.

The Pennsylvania Evening Post was apparently the first newspaper to publish the Declaration, on Saturday, July 6. But from that time forward, the news spread quickly, both in print and by word of mouth. Perhaps the most dramatic unveiling of America's call for independence came in New York City, on July 9, when General George Washington ordered officers of his Continental Army to engage in public readings of the Declaration to their troops, with the British 'constantly in view.' Washington believed that such readings would 'serve as a free incentive to every officer, and soldier, to act with Fidelity and Courage,...knowing that now the peace and safety of his Country depends (under God) solely on the success of our arms. And that he is now in the service of a State, possessed of sufficient power to reward his merit, and advance him to the highest Honors of a free Country.' The ceremonies in New York were not confined to dignified public readings. That same evening a mob in the city toppled an equestrian statue of George III, cutting off the head. According to one observer, 'the lead from which this monument was made is to be run into bullets, to assimilate with the brain of our infatuated adversaries.' And, in fact, the patriot army did make good use of the 4,000 pounds of lead in the statue, melting it down to make 42,000 musket bullets.

However joyous the New York celebration of the symbolic demise of George III may have been, General Washington, looking out onto New York harbor at the ever-increasing number of British warships anchored there, realized that the battle had only begun. By mid-August Washington's army of only a little over 10,000 militiamen and a virtually nonexistent patriot navy found themselves facing a fleet of seventy British warships and over 32,000 troops. By mid-September the British had occupied all of New York City, with Washington's army fleeing north of the city. A year later, the British army marched unopposed into Philadelphia, occupying the city and causing members of the Continental Congress to scurry westward, first to a temporary capital in Lancaster and a few weeks later to York, Pennsylvania. America's citizens, their political leaders, and, especially, a beleaguered continental army were realizing just how daunting their commitment of their lives, their fortunes, and their sacred honor was."