Learning to Stand and Speak 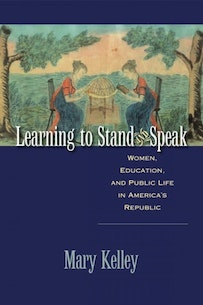 Learning to Stand and Speak by Mary Kelley

Purchase the book from the University of North Carolina Press.

Historian Mary Kelley’s study of educational venues, from classroom instruction to literary societies to reading circles, shows us how and why women shaped their lives anew in the early United States. While analyzing shifts in school curriculum by region and by decade nationwide, Kelley contrasts popular novelist Catherine Maria Sedgwick’s reflections on her early-1790s childhood education with the expanding world of formal education (and career opportunities in teaching) for men and women. These academies and seminaries set many precedents for the favorite subjects and skills, textbooks, and other teaching tools that we recognize in K-12 and college classrooms today.

Whether or not women like Sedgwick remembered to appreciate the people who mentored their love of learning, their homework assignments in reading, writing, art, and geography laid the groundwork for later participation in civic institutions, engaging in public life and claiming their rights of citizenship. One of Sedgwick’s many essays was about Elizabeth Freeman, an enslaved woman who sued for her freedom in Massachusetts. This story inspires object lessons for students of all ages at the Museum and is the basis for a forthcoming theatrical piece in conjunction with our upcoming special exhibit, When Women Lost the Vote: A Revolutionary Story, 1776-1807. Kelley's Learning to Stand and Speak: Women, Education, and Public Life in America's Republic shows us one of the Revolution’s many legacies: a national system for educating citizens and a long-standing reminder to thank our teachers.

The importance of an education at a female academy or seminary can be seen perhaps most dramatically in the experience of women whose schooling took place before these institutions were founded. Catharine Maria Sedgwick was one such woman. Born in 1789 in Stockbridge, Massachusetts, Sedgwick was a member of a transitional generation whose formal educational opportunities were still very limited. In the autobiography she completed a few years before her death in 1867, Sedgwick dismissed her schooling in stark language—“‘Education’ in the common sense I had next to none.” Although she was denied institutionalized training in the arts and sciences, Sedgwick had been more fortunate than this dismissal suggests. Like privileged women of previous generations, she had been introduced to the course of study that the British elite had modeled and that their counterparts on this side of the Atlantic had been practicing since the middle of the eighteenth century. Sedgwick acknowledged the significance of these studies in the distinction she drew between her formal and informal education. “Reading,” she said in her autobiography, “has been to me ‘education.’” Sedgwick paid particular tribute to her father, Theodore, who read aloud to the family. Sedgwick remembered listening at the age of eight to her father reading passages from Cervantes, Shakespeare, Edward Gibbon, and David Hume. The father who read aloud also pressed the daughter to read [ …]

The disclaimer about her schooling notwithstanding, Sedgwick did have the instruction that elite families considered appropriate for a daughter. After she attended the local school in rural Stockbridge, Sedgwick’s parents sought other opportunities for their child. When she was eight, they sent her to Bennington, Vermont […] After this schooling in elementary literacy, the parents enrolled their daughter in a series of schools in New York City, Albany, and Boston, where Sedgwick […] the student was cultivating the same refined sensibility and discerning taste that her grandmother and mother had displayed at tea table and salon. Long after she had left Mrs. Bell’s [school in Albany], Sedgwick the writer would bring that sensibility and taste to bear as one of antebellum America’s most prominent novelists. Little more time would be devoted to the ornamental and decorative arts, however. Instead, Sedgwick was determined to concentrate on what she considered more substantive pursuits—practicing writing, mastering French, and studying geography, as she informed her mother […]

Theodore and Pamela Dwight Sedgwick’s elite standing had determined the character and extent of their daughter’s education, whether informal or formal. Sedgwick’s parents and Sedgwick herself used her education to register both the family’s social standing and their objections to a more egalitarian society. Initially, Sedgwick had aligned herself with her parents. From her perspective, those who opposed her father, a prominent Federalist who was elected to the House of Representatives in the 1790s, were “grasping, dishonest, and vulgar.” Decades later, Sedgwick acknowledged she had changed her mind […]"

In her life as in her opinions, Catharine Sedgwick illustrated the transition to a political culture that celebrated the “people” instead of the gentlemanly elite whom her father had represented. Defined more narrowly than the term might suggest, the “people” identified by Sedgwick’s Democratic Republicans were white men and women of middling and elite standing. The “people” were also gendered: men were expected to engage in both organized politics and civil society; women, in the latter only. Sedgwick herself followed this pattern. A contributor to the organized benevolence that women like her mother had initiated in the decades that spanned the eighteenth and nineteenth centuries, she served as the first director of the New York Women’s Prison Association in 1848. In contrast to the earlier generation, however, she worked with women from the middling classes, who now populated the ranks of voluntary societies. Sedgwick’s influence as a maker of public opinion was felt less in organized benevolence than in literary culture.