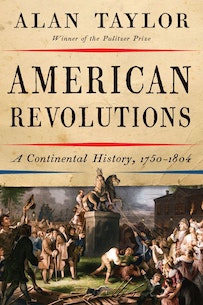 A sequel to American Colonies: The Settling of North America, Alan Taylor's latest book, American Revolutions: A Continental History, 1750-1802 strips away some of the rosy veneer associated with the American Revolution to reveal a violent civil war and a fragile new nation. In extending the timeframe and geographic boundaries in his book, Taylor broadens the narrative to include the "multiple and clashing visions" of the Revolution and its legacies by tracing the role of European empires, slavery, and Native American communities and westward expansion.

Taken from the final chapter, the following excerpt succinctly summarizes many of the book's main threads.

Historians debate how revolutionary the revolution was in its consequences. Some find little substantive change and focus on continuities from the colonial era. Other scholars emphasize expanding economic opportunities and increased political participation by common white men as radical consequences of the revolution. Both views convey only part of the story. The revolution intensified trends already underway, including political assertion by common men, territorial expansion at native expense, and the westward spread of slavery. Acceleration and intensification combined continuity with change.

The greatest transformation came in the terms of political debate. Rather than generate clear resolutions, the revolution created powerful new contradictions. Save for Quakers, colonists had accepted slavery as timeless and immutable. The revolution encouraged more people to oppose slavery as unjust and immoral. Obliged to defend slavery, masters, in turn, created new justifications rooted in biological notions of racial inequality. Those masters also demanded clauses in the Federal Constitution, which made the union contingent upon protecting slavery in the South. In sum, the revolution generated clashing contagions, of slavery and liberty, and pitted them against one another.

The revolution also spawned new contradictions over gender relations. To resist British taxes and fight British troops, Patriots needed support from women as well as men. As consumers and producers, women sustained boycotts and armies, helping to win the revolution for the Patriots. Many women became more outspoken in politics and resisted postwar pressure to resume their public silence. That tension generated a new rhetoric that celebrated women as Republican Mothers and Wives, who taught and sustained the civic values of virtuous citizens. While celebrating women, reformers urged them to remain in domestic roles, nurturing children and husbands rather than pursuing public careers. Women received no new civic rights, but they did gain the cultural ground, as Republican Mothers and Wives, to seek those rights in the next generation.

Clashing definitions of who deserved freedom and equal rights became entangled in new debates and contradictions over political sovereignty. The American Revolution began as a constitutional crisis during the 1760s, when colonists discovered that they faced restrictions and taxes from a centralizing empire. After declaring independence, Patriots initially decentralized power among thirteen essentially sovereign states loosely confederated. During the 1780s, social turmoil within states, boundary disputes between them, western uncertainties 'and diplomatic futility generated a countermovement by nationalists. They created a Federal Constitution that survived a bruising battle for ratification by the states. Instead of resolving questions of sovereignty, the Federal Constitution gave them a national focus, as the partisans of states' rights battled with nationalists at the new capital. Constitutional crises flared in every generation as one region or another threatened secession until those threats became real and bloody in 1860-1861.

The Civil War erupted over the terms of westward growth. As defined by the Jeffersonians, the revolution established that the federal government needed to facilitate the settler expansion that had helped to unravel the British Empire in North America. But what sort of territorial development should the nation favor: by free laborers from the north or by the mix of slave and free labor favored by southerners? As Americans dispossessed natives and Hispanics, the victors accumulated territories that invited deadly conflict over what sort of nation should triumph through expansion. The revolution validated rapid expansion but failed to settle what sort of society ultimately would take shape in the West.