PHILADELPHIA, AUGUST 23, 2017 — Only one month remains to see two 18th-century paintings depicting the last major land battle of the Revolutionary War on display at the Museum of the American Revolution. The paintings, “Le Siège de Yorktown” (The Siege of Yorktown) and “La Prise de Yorktown” (The Surrender of Yorktown), are incredibly detailed and populated with hundreds of tiny figures, like 18th-century “Where’s Waldo?” scenes. They will be on display until Sunday, September 24. 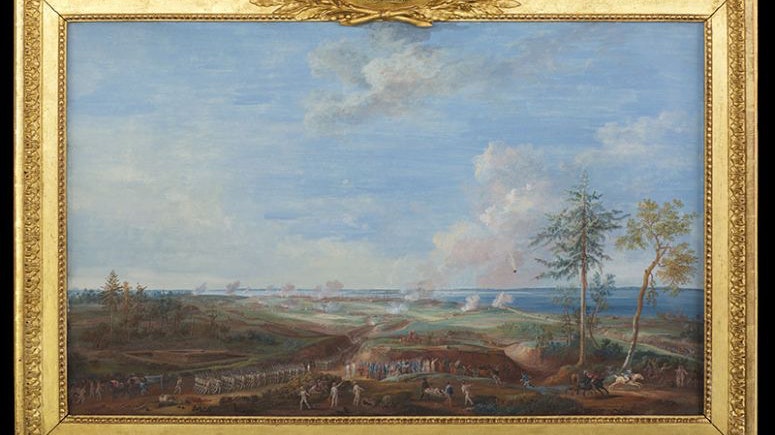 "The Siege of Yorktown" by Louis-Nicolas Van Blarenberghe, 1786. Courtesy of the Hon. Nicholas F. Taubman.

The original versions of the paintings were created for King Louis XVI by French artist Louis-Nicolas van Blarenberghe, the court Painter of Battles to the King. Those paintings are on display at the Palace of Versailles. The paintings that are currently on display at the Museum of the American Revolution are secondary versions created by Van Blarenberghe in 1786 for French General the Comte de Rochambeau, the commander of the French forces at Yorktown. The paintings remained in the Rochambeau family until about 15 years ago, and are in in remarkably pristine condition. 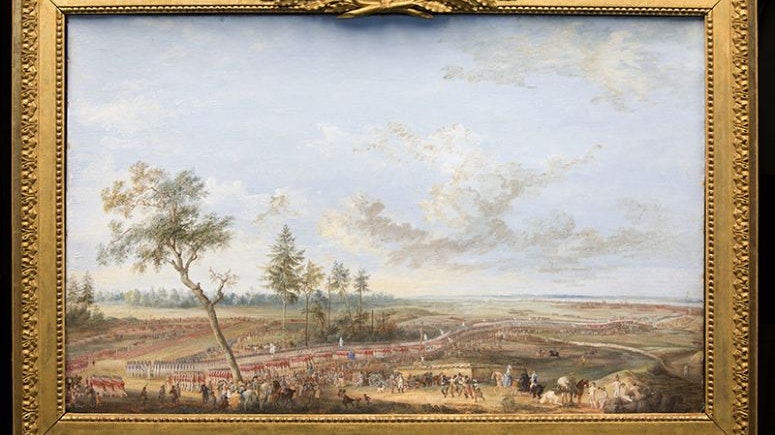 "The Surrender of Yorktown" by Louis-Nicolas Van Blarenberghe, 1786. Courtesy of the Hon. Nicholas F. Taubman.

“We are thrilled to be able to offer our visitors the extraordinary opportunity to view these incredible, richly detailed paintings,” said Museum President and CEO Michael Quinn. “The discovery of previously undetected differences between the two sets of paintings is a fascinating detective story, making the paintings all the more intriguing.”

While researching the paintings, Christopher Bryant, a Massachusetts-based independent scholar and dealer of historical portraits and artifacts, was able to deduce that Rochambeau gave direction to Van Blarenberghe in the execution of the paintings on display at the Museum. He argues that, given the interest taken by Rochambeau in the paintings as visual records of the crowning achievement of his career and the fact that he was an eyewitness to the events depicted, the differences between the two paintings are most likely corrections, rendering Rochambeau's copies an even more historically accurate record than the originals painted for King Louis XVI.

The most prominent alteration to Rochambeau’s 1786 version of the "Siege" is the addition of a group of American officers near the figure representing Rochambeau. While the original painting includes only one American officer holding a map, the replica depicts a new group of 10 officers gathered around that original officer, now identifiable as Gen. George Washington. The map he is holding can be identified as a plan drawn by Lafayette’s cartographer of the British fortifications at Yorktown.

Interestingly, this same scene is reprised in Louis-Charles-Auguste Couder’s “Siege of Yorktown” (1836). The Museum displays a large, hand-painted 19th-century copy of this painting in the second-floor Oneida Indian Atrium. 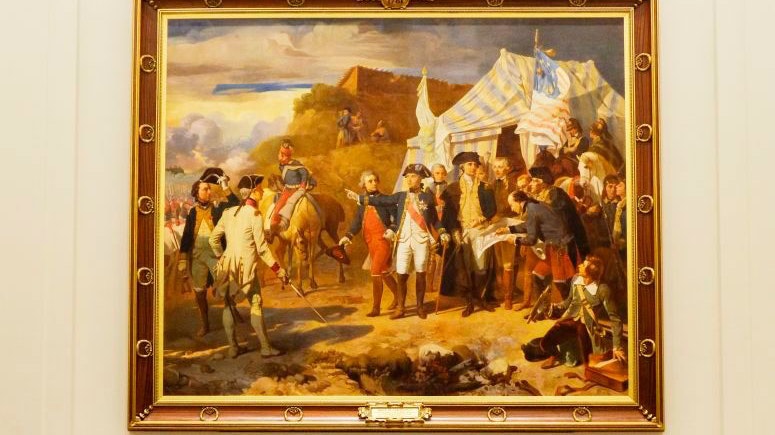 “Siege of Yorktown (1781),” a 19th-century copy of the Louis Charles August Couder painting, is displayed at the Museum. Credit John McGinnis.

“These paintings are remarkable in being superb works of art while also being extraordinarily accurate and detailed. It is very rare that you have that combination, as those two circumstances are usually mutually exclusive,” said Bryant. “However, these paintings are both: they are wonderful paintings on an artistic basis, but there is also so much historical information within them that can be independently corroborated, that they can now be seen as important historical documents in their own right. The ‘Surrender’ provides one of the most accurate accounts of this historic event known.”

Other changes to the paintings include alterations to the uniforms worn by Rochambeau and Washington, several topographical revisions, and the addition of a tree to obscure portions of a scene in “Surrender.” Van Blarenberghe also altered the location of the Metz Artillery, the senior French artillery present at the battle, within the surrender painting. This change reveals the important role the Metz Artillery played in the surrender ceremony.

Bryant detailed his research in an essay here. He will be hosting an illustrated lecture at the Museum on Sept. 7 at 6:30 p.m. for Museum members. Tickets are $10 and are available by calling 267.579.3565 or emailing membership@amrevmuseum.org.

The 23.5 x 37 inch paintings, on short-term loan from Ambassador and Mrs. Nicholas F. Taubman, are located in one of the Museum’s final galleries which explores the battles and skirmishes in 1781 that culminated with the Siege of – and ultimately, the Surrender of Gen. Cornwallis’s 6,000-man British army at – Yorktown, Va. They will be replaced with two 18th-century prints from the Museum’s collection, one of British General Charles Cornwallis and one of British Lieutenant Colonel Banastre Tarleton.