Welcome to the Museum of the American Revolution and the audio tour for our past special exhibition, Liberty: Don Troiani’s Paintings of the Revolutionary War, which was open Oct. 16, 2021 through Sept. 5, 2022. This audio tour, narrated by Director of Education and Community Engagement Adrienne Whaley, will help you learn about some of the highlights of the exhibition, but there is also much more here to explore.

Liberty, which included 46 paintings and nearly 40 historical objects, immersed visitors in the dramatic and research-based works of nationally renowned historical artist Don Troiani to bring the compelling stories about the diverse people and complex events of the American Revolution to life. 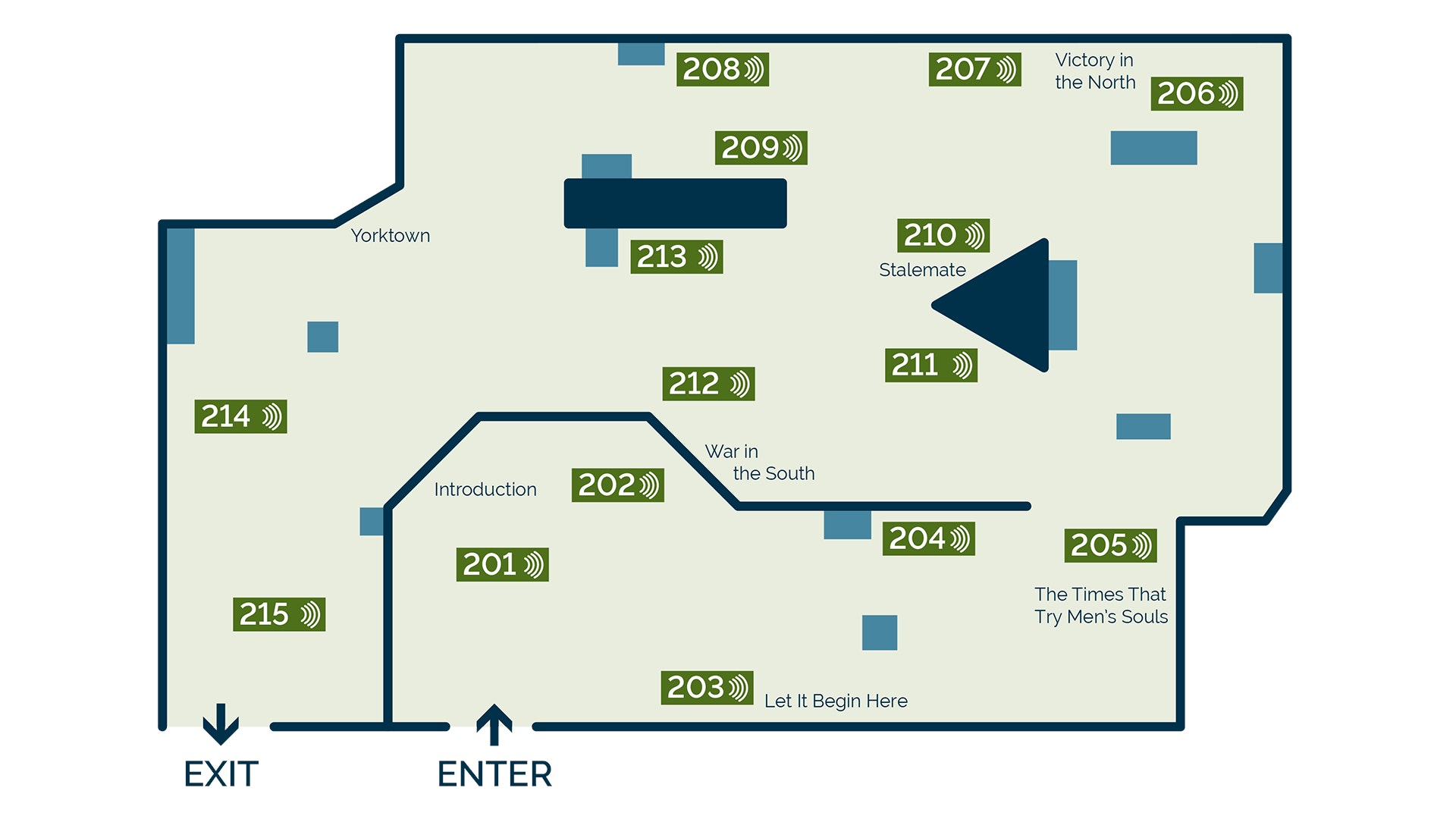 Stop #201 - Introduction
Adrienne Whaley, the Museum’s Director of Education and Community Engagement, welcomes you to the Museum of the American Revolution and the Museum's special exhibition, Liberty: Don Troiani's Paintings on the Revolutionary War. Throughout the tour, you'll be plunged into some of the pivotal events of America’s fight for independence and learn about Troiani’s research-based artistic process alongside real objects from the Revolutionary era that illuminate the story of each scene.
Open the Track 201 Transcript

Stop #202 - Up Close: The Boston Massacre
The Boston Massacre was a defining moment in the years leading up to the Revolutionary War. At this stop, compare and contrast the differences between Don Troiani's painting and Paul Revere's famous engraving of the Boston Massacre, an event that left five Bostonians dead and galvanized people across the colonies into protests and political action.
Open the Track 202 Transcript

Stop #203 - Let It Begin Here
The Revolutionary War began in 1775 with the “shot heard round the world.” The paintings at this stop show the soldiers who fought in the first battles of the war and transport us to a cool April morning in Lexington and Concord and a bright June afternoon on a hill overlooking Boston Harbor.
Open the Track 203 Transcript

Stop #204 - Up Close: The Redoubt, Battle of Bunker Hill
On June 17, 1,500 British soldiers landed from boats and advanced on the redoubt atop Breed's Hill into a fight that would become known as the Battle of Bunker Hill. At this stop, view the scene of New Englanders — men of African, European, and Native American descent — as they prepare to defend the redoubt.
Open the Track 204 Transcript

Stop #205 - The Times That Try Men's Souls
The American Revolution nearly failed in 1776. In the months after the United States of America declared its independence from Great Britain, the British Army, and British Navy nearly crushed the so-called "rebellion." At this stop, view paintings of the events of 1776 and 1777 that kept the Revolution alive, including the Battle of Trenton, and made the American Revolutionaries, as one Loyalist put it, “liberty mad again.”
Open the Track 205 Transcript

Stop #207 - Up Close: Battle of Oriskany
In June 1777, the British launched a plan to cut off New England from the rest of the United States with an invasion of the state of New York. This stop focuses on the painting of the Battle of Oriskany, a battle in which warriors of the Oneida Nation, who allied themselves with the United States, fought against other Haudenosaunee nations, including the Seneca, Cayuga, and Mohawk allies of the British.
Open the Track 207 Transcript

Stop #208 - Artifacts
At this stop, learn more about Don Troiani's collection of hundreds of original objects from the Revolutionary era, including muskets, swords, buttons, and clothing, some of which are on display in this exhibit. His collection – along with objects in museums like ours – inspire and often appear in his paintings.
Open the Track 208 Transcript

Stop #209 - Up Close: Breymann's Redoubt
The Saratoga Campaign of 1777 was a British effort to gain control of the Hudson River Valley. By Oct. 7, British and Revolutionary forces had engaged in a number of battles and were both fortified in Saratoga, north of Albany. The painting at this stop takes you inside the fortification known as Breymann’s Redoubt as the Continental Army attacks the redoubt’s German defenders.
Open the Track 209 Transcript

Stop #210 - Up Close: Molly Pitcher
Accompanying the Revolutionary forces throughout the war were hundreds of women, the “camp followers” who did laundry, nursed the sick, and sold provisions to the soldiers. Among them was Mary Hays, the wife of a soldier named William Hays, a member of Proctor’s Artillery Regiment. At the height of the battle, with William taken down by the heat or a wound, Mary, depicted in the painting at this stop, stepped in and helped to load and fire one of the regiment’s cannons. This heroic action was soon immortalized with a new nickname for Mary Hays: Molly Pitcher.
Open the Track 210 Transcript

Stop #211 - Historical Artwork
How does Don Troiani capture the harsh reality of this conflict? Eyewitness images of the Revolutionary War are rare. Those that do survive offer glimpses into the opinions and perspectives of the people who saw the war first-hand. At this stop, view Troiani's painting of the Battle of Kingsbridge, also called the Stockbridge Indian Massacre, to learn how he uses eyewitness descriptions and sketches to translate historical sources into a modern painting.
Open the Track 211 Transcript

Stop #212 - War in the South
Fighting in the Carolinas, Georgia, and Virginia from 1779 to 1781 wore out the British Army. The paintings at this stop place you in the middle of the action during the Revolutionary War’s last years in the American South, including a depiction of the Battle of Kings Mountain.
Open the Track 212 Transcript

Stop #213 - Up Close: Brave Men as Ever Fought
In 2021, the Museum debuted a new painting from Don Troiani, commissioned with financial support from the Washington-Rochambeau Revolutionary Route National Historic Trail of the National Park Service. At this stop, explore the painting, a few objects used in its creation, and even the art supplies Troiani used. Brave Men as Ever Fought shows a 15-year-old free African American sailor, James Forten, in front of the Pennsylvania State House (now known as Independence Hall) in Philadelphia on Sept. 2, 1781, watching soldiers of color of the Rhode Island Regiment march through the city on their way to Yorktown, Virginia.
Open the Track 213 Transcript

Stop #214 - Up Close: Artillery of Independence
On Oct. 9, 1781, General George Washington and a crowd of soldiers and officers stood around an enormous 18-pound iron cannon in the American Grand Battery outside Yorktown, Virginia. Don Troiani’s research turned up a list of the artillery used by the Continental Army at Yorktown in the collection of the National Archives. This allowed him to paint the cannons and their carriages, like those featured in the painting at this stop, with accurate detail.
Open the Track 214 Transcript

Stop #215 - War's End
In 1783, the Continental Army discharged its soldiers and disbanded. These young veterans typically left the army with little more than their worn-out uniforms and signed paper discharges. Scenes like the one shown in the painting at this stop, of a soldier returning home, were fleeting moments. Many soldiers struggled with poverty and hoped to receive pensions from the United States government.
Open the Track 215 Transcript

Does the Museum offer other audio or guided tours?
Yes and yes! The Museum offers an audio tour of our core exhibition narrated in English by the Museum’s President and CEO Dr. R. Scott Stephenson, as well as a Spanish-language translation. Inquire at the Guest Services Desk about how you can listen on a Museum-issued wand or on your personal device.

The Museum is happy to also offer a wide range of guided tour options, including early access, highlights, and family tours. 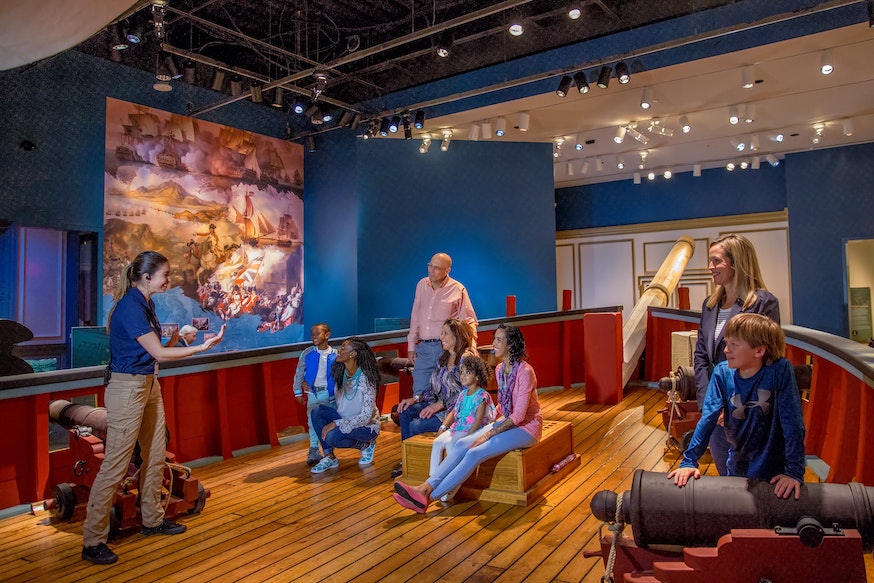 Choose from walking, guided, audio, highlights, and touch tour options to explore the Museum with an expert.
Read More 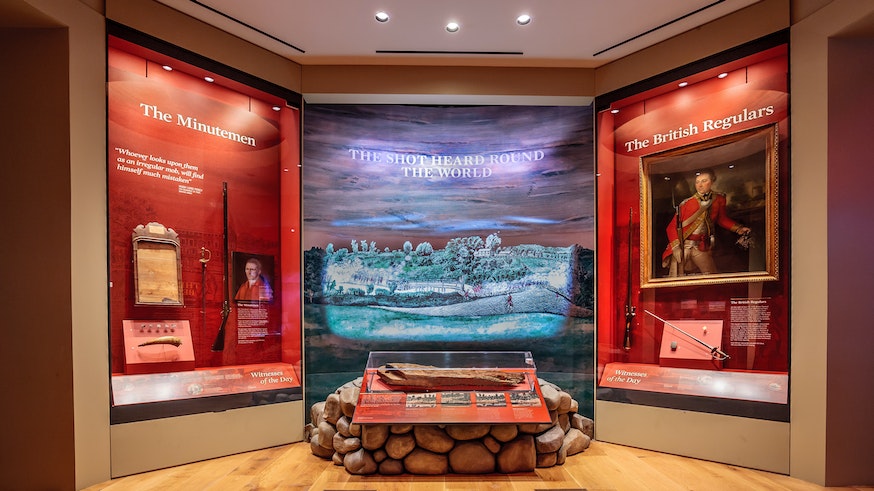 Listen to the Museum of the American Revolution's audio tour as your guide through the core exhibition.
Read More