What did Eliza Schuyler wear to a winter’s ball at age 20 before she met and later married Alexander Hamilton? This month, we ask the Fashioning Eliza: 1777-1787 gown designer Samantha McCarty for a closer look at her process to recreate a 1777 style, adapting Paul Tazewell’s costume design for Eliza in Hamilton: An American Musical. 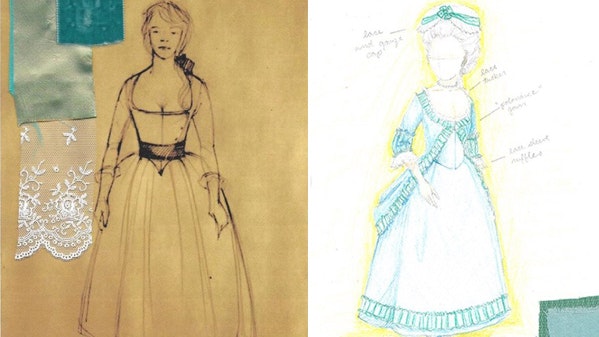 MOAR: Is there anything historical about the (now iconic) color blue silk taffeta that Tazewell selected for Eliza Schuyler’s costumes in Hamilton: An American Musical, Act I? What advice can you give for fans who want to separate fact from fiction, and do you think this is important for understanding 18th-century fashion? 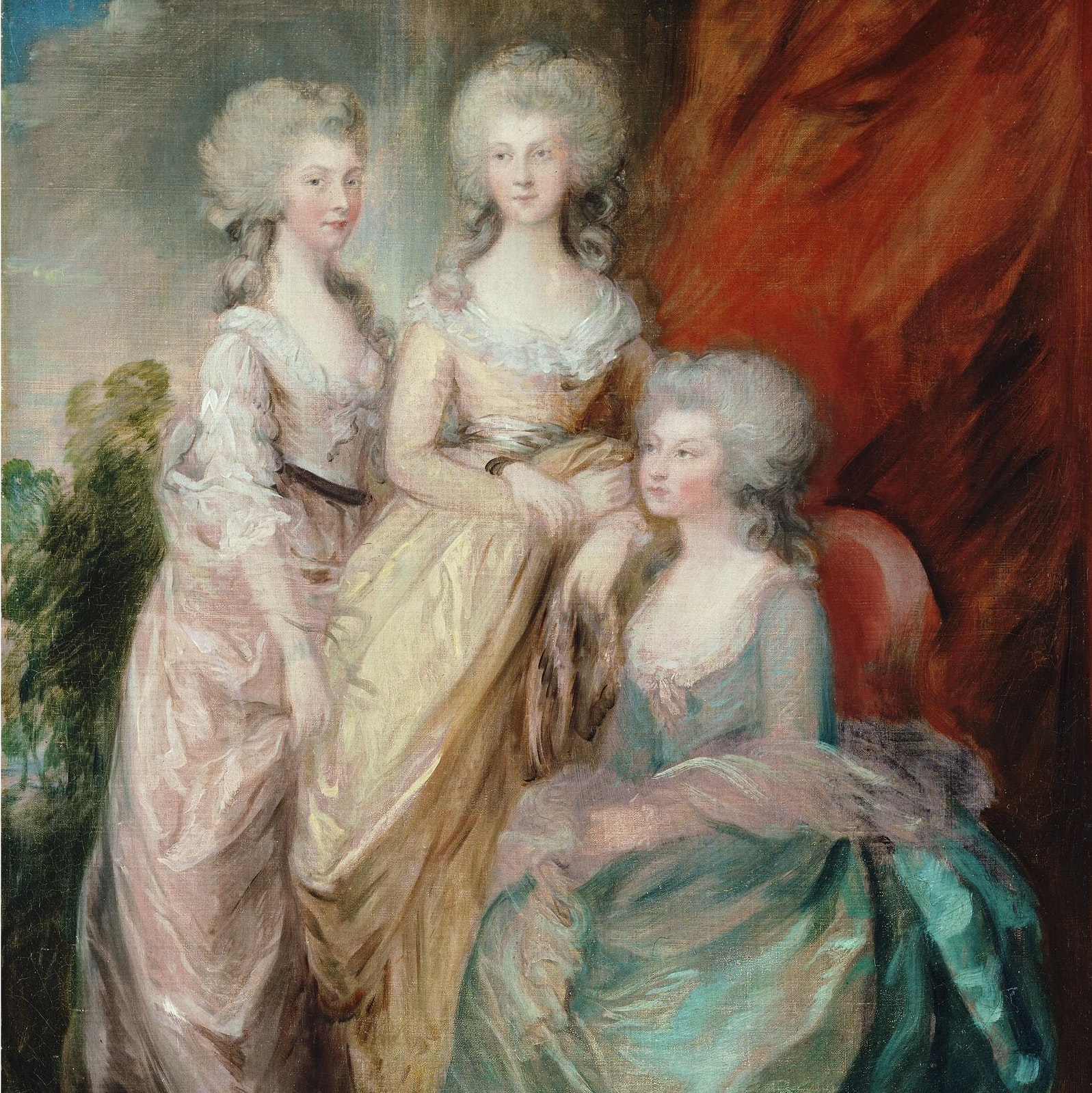 SM: The blue silk taffeta fabrics chosen for Eliza's costumes are period-appropriate in both color and weave for the late 18th century. Silk taffeta was a widely-used silk textile during this period, being fashionable but not as expensive as other weaves such as damask. The colors that all of the Schuyler sisters wear show up in portraits and surviving garments from the 1770s. A portrait of three of King George III's daughters shows them wearing the same pink, blue and yellow that Tazewell chose for the Schuyler daughters.

I really appreciate that Tazewell chose to use silk taffeta for the three sisters, as opposed to a synthetic taffeta. That choice creates a period-correct look, even though the costumes are still needed to meet the demands of theater: lots of movement on stage, quick changes backstage! The women's costumes also maintain a period-appropriate silhouette, with a smooth, conical torso; slim, fitted sleeves; and a full, ankle-length skirt. Some of the outfits for the sisters in 1770s New York are stylistically ahead of their time. There are some design elements that would not have been seen in the late 18th century, such as the asymmetrical buttons on one of Eliza's gown and that another gown laces up the back. Historical costumers and reenactors might be quick to jump on these inaccuracies, but I believe that the priority of theatrical costuming is to serve the story and the character. For me, the brilliance of Tazewell's designs is the balance he struck between historical accuracy and the spirit of the show. The characters are allowed to be themselves, without being overpowered or obscured by period clothing.

MOAR: What design elements did you choose to keep from the Musical version of Eliza’s 1770s gown, and how does this reflect what she might have worn when she first met Alexander Hamilton?

SM: From the start, I knew that the main element from the Musical gown that I would keep was the color scheme. It's so iconic to Eliza's character in the show and Tazewell's design. I really did want to keep my creation as close to the original, while still being as accurate as possible to design and construction for gown making in 1777. First, I looked at the "Schuyler Sisters" trio gown, with the asymmetrical buttons, but there weren't enough period elements I could keep that would leave me with an interesting gown to make! So, I moved on to her next outfit in the show, which she is wearing during A Winter’s Ball when she meets and falls in love with Alexander Hamilton. That outfit is very fashion-forward for the time the show is portraying and would be more appropriate for the early 1790s. I had to find a way to reinterpret it for 1777. I focused on the "cutaway" feature of the jacket, where the front of the jacket is open to reveal a contrasting fabric, and the fact that the outfit uses two different colors. This was similar to the "polonaise" style of gown that became very fashionable in the mid- to- late- 1770s, which also has a "cutaway" front and often utilizes two different colors or two different fabrics. Once I had the idea to make an "Eliza" polonaise, the rest of the concept came very easily. I'm excited to see what it looks like in real life!

MOAR: We were excited to see your designs for our Fashioning Eliza Project. How does this process relate to your past work in historical costuming?

SM: My process to look at an original design and figure out how to reinterpret it in a historically-accurate way was the same for Eliza as it was for a project I did to recreate Felicity Merriman’s gown in the book, Felicity’s Surprise by Valerie Tripp (American Girls Collection, 1991). I documented my process pretty thoroughly in my blog post at The Couture Courtesan. It was really satisfying to take something that was such a big part of my childhood and create something that was true to the time in which the character would have lived. I also hope to accomplish this goal with 1777 Eliza Schuyler Hamilton. From Amber Mendenhall Welch and Susan Holloway Scott’s posts about Fashioning Eliza 1787 last month, my design for Fashioning Eliza 1787 recreates an outfit from a portrait, which is a big contrast from designing and stitching something that could have been in someone's closet. You have to imagine yourself thinking like a historical person, more as a consumer of fashion and more like how we contemplate buying clothing today. Eliza Schuyler could have asked: What elements of fashion do I personally like? Do I like styles that are out of my budget and can I find a budget-friendly option? I enjoy the challenge of doing something creative and related to popular culture that is also historically accurate because it allows me to utilize and share my different interests and talents.

MOAR: Do you think the "polonaise" gown that Eliza might have worn is 'revolutionary' in any way, for women of various political backgrounds in 1770s America? Why or why not?

SM: The "polonaise" style is characterized by cutting the bodice and skirt of the gown in one flowing piece that is pleated and stitched to the body to give it shape. The skirts are often tucked up to create three poufs, and the front of the bodice flows away from the center of the body to reveal a stomacher or waistcoat worn underneath. Brooke Welborn and Kendra VanCleave did extensive research on this style.

It's a fashion-conscious choice for a young woman like Eliza in 1777, though not necessarily "revolutionary.” However, having a fashionable new gown made during the American Revolution may have been seen as unpatriotic to Americans who wanted independence! There was an attempt to encourage sobriety and frugality in dress during the Revolutionary War, to shun English and European imports and embrace American economy. However, as Kate Haulman discusses in The Politics of Fashion in Eighteenth-Century America (University of North Carolina Press, 2014), it never really took hold among the masses: in general, Americans were eager to be fashionable!

For an added Philadelphia history twist related to the living history event held by the Museum of the American Revolution in May 2018, the polonaise gown was noted as being the style of gown used for the costumes of ladies who attended the famous "Meschianza" costume ball, a British celebration in May 1778!

MOAR: What will Museum visitors see if they visit your gown making demonstration here on Dec. 29-30, and how can they expect this gown will change by its debut at History After Hours: A Winter's Ball on Jan. 22? 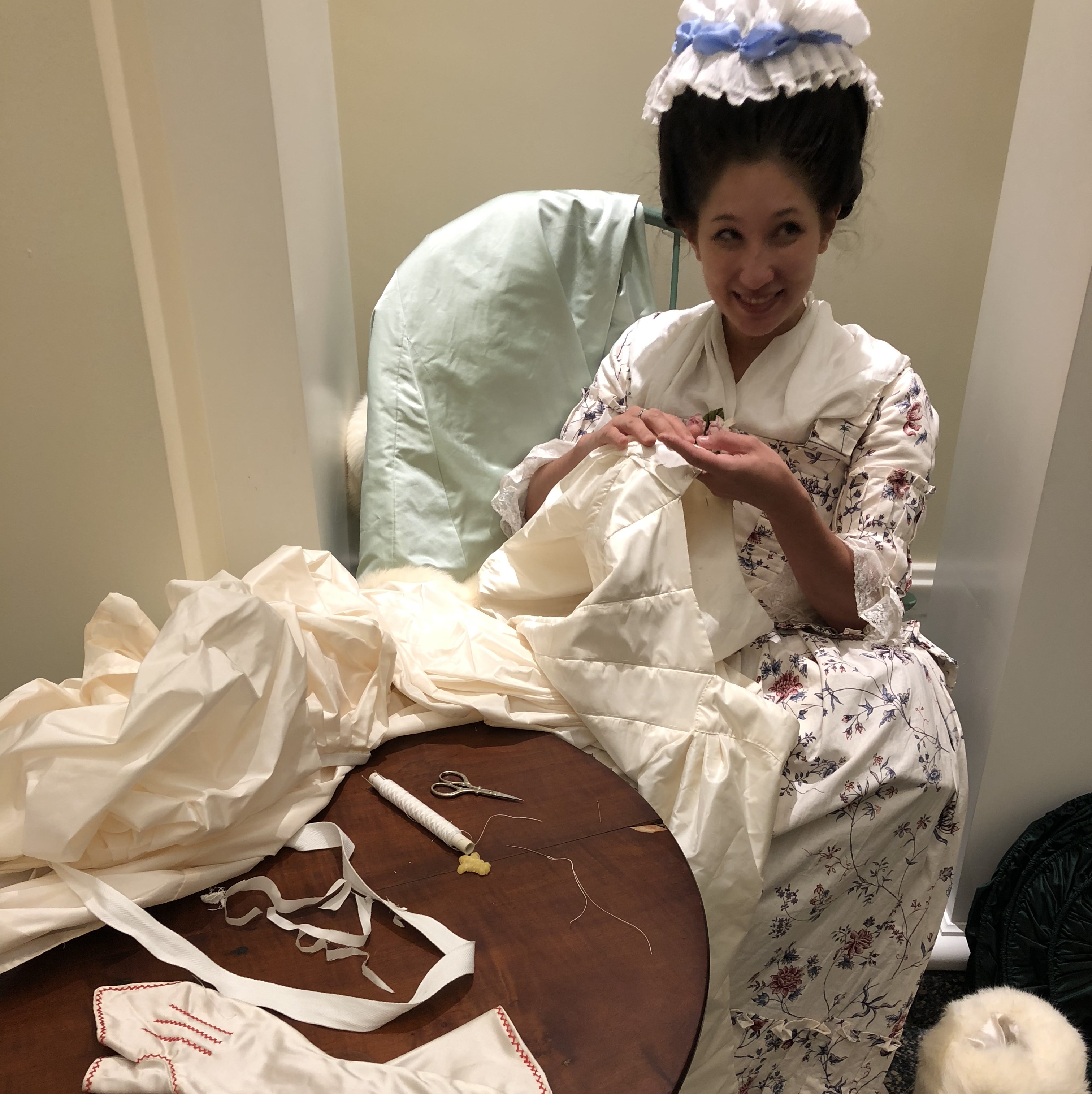 SM: Guests visiting during Dec. 29-30 will get to see a fashionable 18th century gown being made in the period manner of a mantua-maker, or woman's dressmaker. The gown will be cut without a pattern by laying, folding, and pinning the fabric directly on the customer--in this case, an Educator dressed as Eliza Schuyler! Patterns for women's clothing would not become common until the 19th century and the advent of the sewing machine. This skill would have been learned in an apprenticeship, which usually lasted about seven years. Even so, it was considered inferior to th e skill and methods of tailors, who used measures and patterns to create fitted garments. The division between tailor and mantua-maker is less about the gender of their customer (tailors often made women's riding habits, stays, and court gowns) and more about the methods they use to make the clothes. I hope to complete the entire gown during the course of the weekend, with stitching assistance from my colleague Aileen Krotz -- although whatever we don't finish will be done for the gown’s debut at History After Hours! On Jan. 22 and in related gallery education programs for Fashioning Eliza: 1777, you will see the gown with the appropriate accessories made by Amber Mendenhall Welch, known as "millinery" in the 18th century: a silk gauze and lace cap, a lace "tucker" around the neckline, and lace ruffles at the elbows. I will also be dressing Eliza's hair in the fashionable "high roll" style of 1777 with pomatum and powder to complete the look for this special one-night-only program.