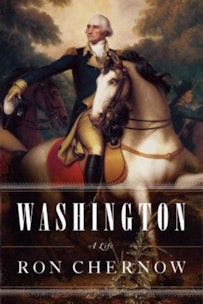 Washington: A Life by Ron Chernow

The Continental Army endured incredible hardships at their winter encampment in Valley Forge from 1777-1778, while 20 miles away the British reveled in their occupation of Philadelphia. This excerpt from Ron Chernow's Washington: A Life shows General George Washington uneasily deciding on Valley Forge as the place to house his troops until the spring. And while his sense of foreboding proved correct—the soldiers suffered from food and clothing shortages, rampant disease, and exposure—the months at Valley Forge nonetheless exemplified Washington's dedication and loyalty to his men. In return, he earned the admiration and trust of his fragile army.

In December 1777 General William Howe eased into comfortable winter quarters in Philadelphia. For British officers in the eighteenth century, warfare remained a seasonal business, and they saw no reason to sacrifice unduly as cold winds blew. 'Assemblies, concerts, comedies, clubs, and the like make us forget that there is any war, save that it is a capital joke,' wrote a Hessian captain, reflecting the overly confident attitude that prevailed among British and Hessian officers after the Brandywine and Germantown victories.

George Washington struggled with the baffling question of where to house his vagabond, threadbare army during the frigid months ahead. The specter of a harsh winter was alarming: four thousand men lacked a single blanket. If Washington withdrew further into Pennsylvania's interior, his army might be secure, but the area already teemed with patriotic refugees from Philadelphia. Such a move would also allow Howe's men to scavenge the countryside outside Philadelphia and batten freely off local farms. Further complicating his decision was that he had to ensure the safety of two homeless legislatures, now stranded in exile: the Continental Congress in York and the Pennsylvania legislature in Lancaster. 'I assure you, sir,' he told Henry Laurens, as he puzzled over the conundrum, 'no circumstance in the course of the present contest, or in my whole life, has employed more of my reflection... than in what manner... to dispose of the army during the winter.'

Washington opted for a spot that was fated to become hallowed ground: Valley Forge, a windswept plateau, twenty miles northwest of Philadelphia, that he would depict as 'a dreary kind of place and uncomfortably provided.' With its open, rolling fields and woods, the encampment stood a day's march from Howe's army and was therefore safe from surprise raids. In theory, it sounded like a promising place. Its high ridges would afford excellent defensive positions; its nearby woods would supply plentiful timber for fuel and construction; abundant local agriculture would nourish the army; and the nearby Schuylkill River and Valley Creek would provide pure water. What should have been an ideal resting place became instead a scene of harrowing misery.

Even before Washington arrived there, the Pennsylvania legislature had the cheek to criticize him for taking his men into winter camp, as if he were retiring into plush quarters. 'I can assure those gentlemen,' Washington wrote testily, 'that it is a much easier and less distressing thing to draw remonstrances in a comfortable room by a good fireside than to occupy a cold bleak hill and sleep under frost and snow without clothes or blankets. However, although they seem to have little feeling for the naked, distressed soldiers, I feel superabundantly for them and from my soul pity those miseries which it is neither in my power to relieve or prevent.' This was a new voice for Washington, reflecting a profound solidarity with his men that went beyond Revolutionary ideology and arose from the special camaraderie of shared suffering.

Already on the icy road to Valley Forge, Washington had spotted streaks of blood from his barefoot men, portending things to come. He slept in the upstairs chamber of a compact, two-story stone mill house built by Isaac Potts, whose iron forges lent the place its name. The commander in chief worked in a modest downstairs room with a fireplace. So meticulous was Washington in his respect for private property that he rented the quarters instead of seizing them. The premises were so cramped that one observer recalled Washington's family as 'exceedingly pinched for room.' Many aides slept jammed together on the floor downstairs. To provide extra space, Washington added an adjoining log cabin for meals.

With the treasury bankrupt, Washington experienced a grim foreboding that this winter would mandate stringency far beyond anything yet endured. In general orders for December 17, he suggested that the impending winter might call for preternatural strength and vowed 'to share in the hardship and partake of every inconvenience' with his men. Whatever his failings as a general, Washington's moral strength held the shaky army together. His position transcended that of a mere general, having taken on a paternal dimension. 'The people of America look up to you as their father,' Henry Knox told him, 'and into your hands they entrust their all, fully confident of every exertion on your part for their security and happiness.'