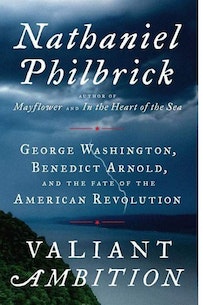 Valiant Ambition: George Washington, Benedict Arnold, and the Fate of the American Revolution by Nathaniel Philbrick

Nathaniel Philbrick's Valiant Ambition: George Washington, Benedict Arnold, and the Fate of the American Revolution offers an intriguing look at perhaps the two most famous men to emerge from the Revolutionary War-one hailed a hero, the other a villain. The story follows Arnold's fall from one of Washington's greatest generals to America's most legendary traitor. We learn how Arnold's anger after being overlooked for promotion by the Continental Congress, coupled with the loss of his personal fortune and debilitating war injuries, led him to sell his loyalty to the British. Juxtaposed against Arnold's fall is the story of George Washington's rise, and Philbrick portrays the commander in chief as one whose greatest attribute was an "extraordinary ability to learn and improve amid...challenging circumstances."

In the following excerpt, we enter the story in July of 1780 as Arnold, along with his wife Peggy, hatched their plan. Working with John André, a young British officer, Arnold would surrender West Point to the British. The only catch, Arnold had to secure the position as commander of West Point first.

By the end of July, Arnold had staked everything on the West Point gambit. From what he could tell, Henry Clinton was enthusiastic about the idea. Unfortunately, Arnold's travels had made communication with the British difficult. Peggy became the conduit through which messages from Arnold and [John] André flowed, and given the uncertainty of Arnold's whereabouts, Peggy often had no choice but to hold on to the messages for weeks at a time. The resulting, almost monthlong delay had been agonizing, and yet Washington had been just as difficult to pin down. By the end of July Arnold had not yet received definitive word from either the British or the American commander. That did not prevent him from barreling ahead under the assumption that he was about to replace Robert Howe as commander at West Point and that the British were going to pay him handsomely for his subsequent efforts on their behalf.

After a brief stop in Philadelphia, during which he informed Congress that he was about to return to active duty and therefore needed an advance of twenty-five thousand Continental dollars (which, surprisingly, he was duly paid), he was on his way to catch up with Washington in Kakiat, New York, on the west side of the Hudson River. If all went according to plan, Peggy and their infant son would soon be on their way to meet him at their new residence near the Fortress at West Point.

On July 31 Arnold found Washington on a height of land overlooking the Hudson, watching his army being transported across the river to Verplanck's Point. The commander in chief's head was full of preparations for his assault on New York. That day he wrote Rochambeau that 'the only way I can be useful to you is to menace New York, and even to attack it, if the force remaining there does not exceed what I have reason to believe. I am pressing my movements for that purpose with all the rapidity in our power.' To Lafayette, who was acting as Washington's emissary to the French commander, he wrote, 'I am exceedingly hurried in arranging and preparing a variety of matters.'

Washington might have been preoccupied, but he was undoubtedly pleased to see Arnold, whose leg had at last healed to the point that he could now ride a horse. Washington later remembered that Arnold asked 'if I had thought of anything for him.' The American commander had what he believed to be very good news. Instead of wasting his talents at West Point, Arnold was to lead the army's left wing during the assault on New York-a position that Washington described as 'a post of honor.'

Arnold responded in a completely unexpected way. 'Upon this information,' Washington remembered, 'his countenance changed, and he appeared to be quite fallen; and instead of thanking me, or expressing any pleasure at the appointment, never opened his mouth.' Washington later admitted to having 'a good opinion of Arnold before his treachery was brought to light.' Rather than arousing any suspicions in the commander in chief, Arnold's unusual response seems to have provoked genuine concern. To Washington on that day on the Hudson, Arnold appeared to be a broken man who lacked the confidence to take advantage of the opportunity he had been offered. It never occurred to Washington to question Arnold's motives, and one can only wonder whether Arnold felt at least a modicum of shame as the man he admired as much as anyone suggested that he take some time to think it over. 'I desired him to go on to my quarters,' Washington remembered, 'and get something to refresh himself, and I would meet him there soon.'

Arnold did as his commander in chief suggested, and once at headquarter he took Washington's trusted aide Tench Tilghman aside and expressed his 'great uneasiness' with the prospect of commanding the left wing, claiming that 'his leg ... would not permit him to be long on horseback; and intimated a great desire to have the command at West Point.'

Eventually Washington arrived at headquarters, and Tilghman told him of his conversation with Arnold. 'I made no reply to it' he remembered, 'but [Arnold's] behavior struck me as strange and unaccountable.' Washington apparently decided that for both Arnold's and the army's benefit, Arnold should lay aside his misgivings and assume command of the left wing. Even with a leg that had been broken below the knee at Quebec and above the knee at Saratoga, he was one of the best generals Washington had. In the General Orders for August 1, Arnold was listed as commanding the left wing.

"Several days later, 130 miles to the south in Philadelphia, Peggy Arnold was just finishing dinner at the home of the financier Robert Morris when a guest arrived with news from Washington's army. Her husband, the guest informed her, was not going to have the command at West Point; instead, he had been 'appointed to a different but more honorable command.'"

Much like Arnold on the banks of the Hudson, Peggy did not react as might have been expected. According to one account, 'The information affected her so much as to produce hysteric fits.' By that time, Arnold's aide David Franks had grown accustomed to Peggy's 'occasional paroxysms of physical indisposition, attended by nervous debility, during which she would give utterance to anything and everything on her mind.'

The interchange at the Morris residence, however, had been beyond Franks's ability to control, and all attempts to placate Peggy 'produced no effect.' After sixteen months of marriage, during which she had given birth to a child while managing her temperamental husband through the tense series of negotiations upon which their financial welfare increasingly appeared to depend, Peggy had reached the breaking point.

But Peggy need not have worried. Clinton ultimately failed to convince his counterpart in the British navy, Admiral Mariot Arbuthnot, that the projected expedition to Newport was worth his while. When he realized that he was not going to receive the required naval support, Clinton called off the operation. Having gotten only as far as Huntington, Long Island, Clinton and André were soon sailing back to New York with their six thousand troops. When Washington learned of the British army's return, he called off the attack.

In the General Orders for August 3 was a postscript: 'Major General Arnold will take command of the garrison at West Point.'