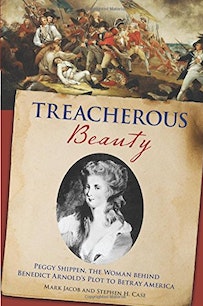 Benedict Arnold's treasonous behavior during the American Revolution has earned him widespread notoriety to this day. Rarely mentioned, however, is the role his wife, Peggy Shippen, played in his betrayal. In Treacherous Beauty, authors Mark Jacob and Stephen H. Case share the fascinating story of how the machinations of a Philadelphia society girl impacted the American War of Independence. In this excerpt, they show how prevailing attitudes about women protected Peggy from suspicion after her husband defected to the British side.

Her husband, a hero of the American Revolution named Benedict Arnold, had just fled to the enemy, abandoning her in a tidy country estate in New York's Hudson Highlands. Left alone to answer for the treason, she screamed and wailed and shrieked, her cries of anguish reverberating throughout the house. Half dressed in the presence of proper men, she clutched her infant son to her breast and gave voice to fevered hallucinations. She declared that her husband had risen through the ceiling, and that hot irons had been put into his head. The hot irons were torturing her, too, and only the commander in chief, George Washington, had the power to take them away.

But when Washington arrived in her bedroom to comfort her, she declared him an imposter who was planning to murder her child. And she wept, and she wept some more.

Washington and other men of honor vouched for her innocence and virtually worshipped at her bedside. And so a woman whose espionage and treachery brought the new nation to the brink of disaster was allowed to go free, vilified by a few but pitied and admired by many more.

She was only twenty years old, and she had fooled the Founding Fathers...

In an era when female intelligence and talents were often dismissed, women held one advantage: They were rarely suspected of elaborate crimes.

Peggy's friend and protector David Franks believed she was too nervous and flighty to be trusted by Arnold as an accomplice. 'In truth,' he said, 'she was subject to occasional paroxysms of physical indisposition, attended by nervous debility, during which she would give utterance to anything and everything on her mind. This was a fact well known amongst us of the general's family; so much so as to cause us to be scrupulous of what we told her or said in hearing.' Franks offered a second reason why Arnold wouldn't have involved her in the plot: 'He was, moreover, too well aware of her warm patriotic feelings. You know... how completely she was an American at that important period... I can aver solemnly she was totally ignorant of his schemes.'

The truth was that Peggy had socialized with British officers, maintained close friendships with outspoken Loyalists such as Becky Franks, and become an enemy of Philadelphia's radical independence movement. Yet one of her intimates believed that she was such an ardent Patriot that she would have turned in her husband for talking with the British? What a testament to Peggy's powers of personal manipulation.

Others embraced the too-flighty-for-treason argument. 'The surviving members of the lady's family, some of them her contemporaries, are satisfied that the texture of her mind did not qualify her to be the confidante of such perilous secrets,' a journal article in 1837 declared.

A century after the events, her husband's biographer Isaac N. Arnold defended Peggy with the too-virtuous argument: 'If Arnold had disclosed his plans to her,' he wrote, 'she would have been much more likely, prompted alike by her love and clear perception of right, to have tried to have saved him from the commission of a fearful crime and a terrible blunder.'

Many judged her to be innocent using even simpler logic: She was a woman; therefore, she wouldn't have done it. Elizabeth Elet, the leading 19th-century biographer of revolutionary women, wrote that she was 'utterly rejecting' the idea that Peggy could have instigated the plot, and declared that 'all common principles of human action' were opposed to it.

But really, the only way Peggy could have been ignorant of the plot is if she had tried hard to be oblivious; if she had passed on secret correspondence without any thought and had written to [British officer Major John] André with nothing more in mind than sewing supplies. On the contrary, Peggy wanted to know every detail of everything in her life. She upbraided Arnold for not sharing enough court-martial information with her. And in her later letters to her father, her command of financial nuances is awe-inspiring. Peggy was many things, but she was no dupe. She was, however, perfectly cast as the suffering spouse...