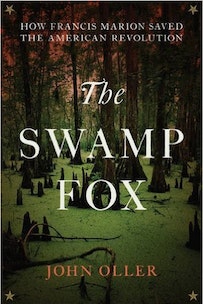 The Swamp Fox: How Francis Marion Saved the American Revolution by John Oller

Known for his cunning and resourcefulness, Francis Marion earned the moniker the "Swamp Fox" for his exploits during the Revolutionary War, which also inspired many colorful interpretations of his life and military career. From the first biography of Marion in 1809 to the short-lived Disney series of the late 1950s and the more recent 2000 Hollywood film, The Patriot, the legends surrounding Marion are generally more fiction than fact. In a new biography, titled The Swamp Fox: How Francis Marion Saved the American Revolution, journalist John Oller seeks to unpack and debunk some of the myths and folklore that have obscured the life of Marion.

In the following extract, we enter the story in 1781 when Francis Marion and Banastre Tarleton were crisscrossing South Carolina in a deadly game of cat and mouse.

From Camden on November 1 [George] Turnbull wrote to [Banastre] Tarleton at Winnsboro, imploring him to gather up his Legion to hunt down Marion. Tarleton rarely paid any compliments to his rebel adversaries, but he respected Marion, later writing that 'Mr. Marion, by his zeal and abilities, shewed himself capable of the trust committed to his charge.' Still, over the previous six months Tarleton had thrashed several more senior commanders-Isaac Huger, William Washington, Abraham Buford, and Thomas Sumter-and he had no reason to doubt he would do the same to Marion. He welcomed the opportunity to pursue him, and Cornwallis approved the operation, telling Tarleton, 'I ... most sincerely hope you will get at Mr. Marion.'

On November 5, after conferring with Turnbull in Camden, Tarleton and his Legion, joined by Harrison's Rangers, the Tory 'banditti,' set out south after Marion. They heard a rumor he was at Singleton's Mills in the High Hills of Santee, but when they arrived, Marion was nowhere to be found. Instead, he was camped thirty miles farther south, just above Nelson's Ferry, where he planned to attack the British guard. He had arrived there with two hundred men on the evening of November 5 after a day-and-a-half ride west from Lynches Creek.

By November 7 Tarleton had moved down to the plantation of the recently widowed Dorothy Richardson, whose late husband, Brigadier General Richard Richardson, had been the victorious Whig commander in the Snow Campaign in 1775. From a local slave Tarleton learned that Marion was bivouacked sixteen miles south, near Nelson's Ferry. Marion had likewise detected Tarleton's presence in the vicinity. The two of them then engaged in a game of cat and mouse. Marion laid an ambush at Nelson's and waited until night, expecting Tarleton to cross there, but the Legion commander fell back a few miles in the other direction. Marion then came up to within three miles of Tarleton's camp, intending to surprise him.

But Tarleton was crafty as well: he spread the rumor that his main body had returned to Camden and sent out small patrols with instructions to show little signs of fear by leaving camps abruptly with food still cooking in order to draw Marion to attack. He lit bonfires at Richardson's Plantation designed to give the impression that he was burning the home of a revered patriot family. In the meantime he wheeled out two small artillery pieces capable of a kind of firepower Marion's men were not used to facing. Then, knowing Marion's penchant for making surprise attacks at night, Tarleton hid in the woods with his force of four hundred and waited for Marion to come to him.

Marion nearly took the bait. Seeing the light near Richardson's, he concluded that it was the plantation house on fire and that Tarleton was there. Not knowing the size of the enemy force, he crept forward, deliberating over his next move. Just then he was met by Richard Richardson Jr., son of the late general. He brought information that Tarleton was camped a couple of miles away with a hundred cavalry and three hundred dragoons. The junior Richardson, a thirty-nine-year-old militia major, had been taken prisoner at Charleston, paroled, and returned to service after being exchanged. By slipping away to alert Marion, he was risking his life. He also reported that Tarleton had two artillery pieces-a grasshopper (a light brass cannon, named for the way it jumped backward on firing) and a small field howitzer. He further informed Marion that one of his men had deserted to the enemy and was now serving as a guide for Tarleton.

Realizing that Tarleton held the advantage, including artillery, which his men had not yet faced, Marion decided he needed to depart the area at once. He took his men on a fast ride in darkness through a major swamp, not stopping until they were past Richbourg's Mill Dam on Jack's Creek six miles away. With a nearly impenetrable swamp and almost nine miles lying between him and Tarleton, Marion decided he was safe for the night.

The next morning, November 8, Tarleton was scratching his head over Marion's failure to attack, so he sent a few men to find out why. They brought back a prisoner who had managed to escape from Marion's brigade during the previous night's mad dash. He informed them that Marion would have attacked him had some 'treacherous women' (the widow Richardson and others) not smuggled out an emissary to warn Marion of Tarleton's actual number. Tarleton immediately ordered his men to their arms and mounts, but they soon discovered that Marion had already flown from his camp at Jack's Creek in the direction of Kingstree.

Tarleton then embarked on a seven-hour hunt for his intended victim, trudging through twenty-six miles of miserable swamps and narrow gorges. Marion in tum took his men on a thirty-five-mile jaunt, up to the of one creek, down along a river and then across another, through and bogs, always staying beyond shouting distance of his pursuers. Tarleton reported to Cornwallis, due to Marion's head start and 'the difficulties of the country,' he was unable to catch him. He abandoned the chase at Ox Swamp, outside of present-day Manning, which was wide, mucky, and without roads for passage. It was there Tarleton is said to have uttered the words that gave Marion his immortal nickname. 'Come my boys! Let us go back, and we will soon find the Gamecock [Thomas Sumter]. But as for this damned old fox, the Devil himself could not catch him.'

At that point, the night of November 8, Marion was about twelve miles east at Benbow's Ferry, ten miles north of Kingstree. There he had established a strong defensive position with the Black River between him and his pursuers and swamps to his rear into which he could disappear if necessary. But Tarleton was giving up. He tried to put a good face on his excursion, telling Cornwallis that although he regretted not being able to bring Marion's rebels to a fight, he was happy to have broken them up. In his memoirs seven years later Tarleton would also claim that he would have caught up to Marion had he not received a message from Cornwallis ordering him immediately to return to Winnsboro. But although Cornwallis did issue that directive, it was not until after Tarleton had already ended his pursuit at Ox Swamp. Cornwallis's hope that Tarleton would 'get at Mr. Marion' had gone unfulfilled.

Tarleton's frustration was evident from his actions immediately afterward. As he told Cornwallis, he 'laid ... waste' to all the houses and plantations of the rebels around Richardson's Plantation and Jack's Creek. (As usual, Cornwallis turned a blind eye to such depredations.) Tarleton paid a visit back to the widow Richardson's home and, as Marion reported to Gates, 'beat' her to 'make her tell where I was.' Doing what he had earlier pretended to do in order to lure Marion to battle, Tarleton then burned Mrs. Richardson's home and some of her cattle, destroyed all her corn, and left her without so much as a change of clothes. From Nelson's Ferry to Camden he destroyed the homes and grain of thirty plantation owners. Worst of all, Marion reported, Tarleton had 'behaved to the poor women he has distressed with great barbarity .... It is beyond measure distressing to see the women and children sitting in the open air round a fire without a blanket, or any clothing but what they had on, and women of family, and that had ample fortunes; for he spares neither Whig nor Tory.'

For the moment, however, Marion felt powerless to confront Tarleton. The patriots were low on ammunition, and the militia, afraid of the Legion cavalry, was reluctant to turn out. This gave Tarleton a temporary feeling of triumph. He laid down his torch and issued a proclamation from Singleton's Mills on November 11, offering pardons to any rebels who returned to their homes to live peaceably and promised to alert the Tory militia leaders to any future insurrections. 'It is not the wish of Britons to be cruel or to destroy, but it is now obvious to all Carolina that treachery, perfidy, and perjury will be punished with instant fire and sword,' his proclamation read. 'The country seems now convinced of the error of insurrection,' he boasted to Cornwallis. And if there had been even one local Tory not otherwise cowed by Marion who had given him any help, Tarleton maintained, he would have achieved the total destruction of Mr. Marion.' Yet Cornwallis was pleased with the results. He believed that by forcing Marion to take to the swamps, Tarleton had convinced the patriot citizenry that 'there was a power superior to Marion' who could reward and punish them. Tarleton had 'so far checked the insurrection,' Cornwallis told Clinton, 'that the greatest part of them have not dared openly to appear in arms against us since his expedition.'

Even as the British were claiming to have subdued Marion, though, he was planning another offensive operation. Within a few days, as soon as he became satisfied that Tarleton was heading back to Winnsboro, Marion had gathered enough of a force to threaten Georgetown again. Nisbet Balfour, head of the garrison at Charleston, needled Cornwallis by reminding him that his favorite Tarleton had claimed to have ended the Marion threat. Despite Ban's claim, Marion had reappeared, which was 'no joke to us,' Balfour assured his Lordship. 'I do not think that Tarleton flattered himself that he had done more than stopping his immediate progress and preventing the militia from joining him,' Cornwallis coolly responded. Shortly thereafter Cornwallis acknowledged that Marion was still a problem. 'We have lost two great plagues in Sumpter [sic] and [Elijah] Clarke,' Cornwallis wrote to Balfour, based on a false report that those two partisan leaders had been killed. Then he added, 'I wish your friend Marion was as quiet.'