The Shoemaker and the Tea Party 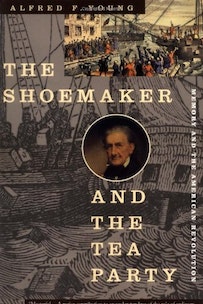 The Shoemaker and the Tea Party: Memory and the American Revolution by Alfred Young

The first of two essays in Alfred F. Young's The Shoemaker and the Tea Party shows the contributions of ordinary people to the American Revolution by focusing on the life of George Robert Twelves Hewes. Hewes was an unremarkable shoemaker, save his participation in events like the Boston Tea Party on December 16, 1773. As Young explains, 'He was a nobody who briefly became a somebody in the Revolution and, for a moment near the end of his life, a hero.' Here is Hewes' recollection of the Tea Party, much of it in his own words.

At the Tea Party on the night of December 16, 1773, Hewes the citizen 'volunteered' and became the kind of leader for whom most historians have never found a place. The Tea Party, unlike the Massacre, was organized by the radical Whig leaders of Boston. They mapped the strategy, organized the public meetings, appointed the companies to guard the tea ships at Griffin's Wharf, and planned the official boarding parties. They converted the town meetings into meetings of 'the whole body of the people,' one of which [Thomas] Hutchinson found 'consisted principally of the Lower ranks of the People & even Journeymen Tradesmen were brought in to increase the number & the Rabble were not excluded yet there were divers Gentlemen of Good Fortunes among them…'

The recollection of Joshua Wyeth, a journeyman blacksmith, verified Hewe's story in explicit detail: 'It was proposed that young men, not much known in town and not liable to be easily recognized should lead in the business.' Wyeth believed that 'most of the persons selected for the occasion were apprentices and journeymen, as was the case with myself, living with tory masters.' Wyeth 'had but a few hours warning of what was intended to be done.' Those in the officially designated parties, about thirty men better known, appeared in well-prepared Indian disguises. As nobodies, the volunteers—anywhere from fifty to one hundred men—could get away with hastily improvised disguises. Hewes said he got himself up as an Indian and daubed his 'face and hands with coal dust in the shop of [a] blacksmith.' In the streets 'I fell in with many who were dressed, equipped, and painted as I was, and who fell in with me and marched in order to the place of our destination.'

At Griffin's Wharf the volunteers were orderly, self-disciplined, and ready to accept leadership. [Hewes recalled:] 'When we arrived at the wharf, there were three of our number who assumed an authority to direct our operations, to which we readily submitted. They divided us into three parties, for the purpose of boarding the three ships which contained the tea at the same time. The name of him who commanded the division to which I was assigned was Leonard Pitt [Lendell Pitts]. The names of the other commanders I never knew. We were immediately ordered by the respective commanders to board all the ships at the same time, which we promptly obeyed.'

But for Hewes there was something new: he was singled out of the rank and file and made an officer in the field. 'The commander of the division to which I belonged, as soon as we were on board the ship, appointed me boatswain, and ordered me to go to the captain and demand of him the keys to the hatches and a dozen candles. I made the demand accordingly, and the captain promptly replied, and delivered the articles; but requested me at the same time do no damage to the ship or rigging. We then were ordered by our commander to open the hatches, and take out all the chests of tea and throw them overboard, and we immediately proceeded to execute his orders; first cutting and splitting the chests with our tomahawks, so as thoroughly to expose them to the effects of the water. In about three hours from the time we went on board, we had thus broken and thrown overboard every tea chest to be found in the ship; while those in the other ships were disposing of the tea in the same way, at the same time. We were surrounded by British armed ships, but no attempt was made to resist us. We then quietly retired to our several places of residence, without having any conversation with each other, or taking any measures to discover who were our associates…'

As the Tea Party ended, Hewes was stirred to further action on his own initiative... While the crews were throwing the tea overboard, a few other men tried to smuggle off some of the tea scattered on the decks. 'One Captain O'Connor whom I knew well,' said Hewes, 'came on board for that purpose, and when he supposed he was not noticed, filled his pockets, and also the lining of his coat. But I had detected him, and gave information to the captain of what he was doing. We were ordered to take him into custody, and just as he was stepping from the vessel, I seized him by the skirt of his coat, and in attempting to pull him back, I tore it off.' They scuffled. O'Connor recognized him and 'threatened to complain to the Governor.' 'You had better make your will first,' quoth Hewes, doubling his fist expressively, and O'Connor escaped, running the gauntlet of the crowd on the wharf. 'The next day we nailed the skirt of his coat, which I had pulled off, to the whipping post in Charlestown, the place of his residence, with a label upon it,' to shame O'Connor by 'popular indignation.'"