The Men Who Lost America 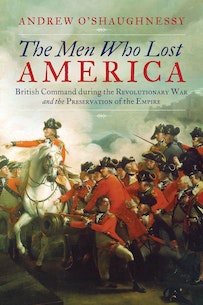 The Men Who Lost America: British Command During the Revolutionary War and the Preservation of the Empire by Andrew O'Shaughnessy

What did the American Revolution look like from the other side? In The Men Who Lost America, Andrew O'Shaughnessy surveys the strengths, failings, and quirks of ten British leaders whose actions shaped the outcome of the war. In today’s excerpt we focus on one of the lesser-known figures profiled in the book, British Admiral Sir George Rodney.

In February 1781 Rodney captured St. Eustatius, a Dutch-held Caribbean island that served as a major trading port for the shipment of arms and munitions to the American colonists. Rodney’s decisions after this point set in motion a chain of events that would lead to British General Charles Cornwallis’ surrender at the Battle of Yorktown—an event that proved critical to the American cause. At the root of this was Rodney’s inaction. His decision not to intercept the fleet of French Admiral François-Joseph Paul, Comte de Grasse, enabled de Grasse to cut off Cornwallis and his troops’ access to supplies and an escape route, thus changing the course of history.

Some believed Rodney’s reasons were selfish, like Admiral Samuel Hood, who accused Rodney of choosing to protect his captured goods from the conquest of St. Eustatius over the safety of British troops. Others considered it an innocent miscalculation. Regardless, the outcome, according to O’Shaughnessy, remains the same: the loss of North America.

Cornwallis [the British commander at Yorktown] had confidently expected the arrival of [Rodney’s] fleet from the British Caribbean at Yorktown. Instead, Rodney remained at St. Eustatius for three crucial months during which he ceased to pursue further naval operations. His presence was hardly necessary when the island, stripped of its trade, was a mere rock of ‘neither of real nor relative importance.’ Rodney was preoccupied with the details of the sales of the captured goods and the safe return of the loot to Britain. He called off a proposed expedition against Dutch Curaçao and Surinam, the command of which he had promised to [Admiral] Hood. Although Rodney later justified his order on the grounds of intelligence he had received of the sailing of the French fleet to the Caribbean, Hood claimed that he had made the decision before the news arrived.

These setbacks were incidental compared to the failure of Rodney to intercept de Grasse’s fleet, which had left Brest to go to the Caribbean on March 22. British strategic policy was predicated on a superior British naval presence, and the government therefore expected Rodney either to prevent de Grasse from reaching Martinique or to follow him to North America. Delegating his responsibility to Admiral Hood, Rodney instead remained at St. Eustatius. When the homebound convoy of a hundred prizes was about to sail from St. Eustatius, Rodney ordered Hood to move from the windward to the leeward of Martinique. Hood suspected that the change was to protect the captured goods, rather than to intercept reinforcements from France. Hood complained, ‘doubtless there never was a squadron so unmeaningly stationed as the one under my command, and what Sir George Rodney’s motive for it could be I cannot conceive, unless it was to cover him at St. Eustatius.’ These were not retrospective criticisms, but concerns that he had repeatedly expressed to Rodney. His fears were justified by events when de Grasse outmaneuvered him sailing windward into Martinique.

In defense of Rodney, it should be said that there were valid strategic reasons to reposition Hood. Owing to sudden changes in currents and winds, it was difficult to patrol from either the windward or the leeward side of the entrance to Fort Royal Bay in Martinique… Furthermore, when Rodney repositioned Hood at Martinique, he had been misinformed by intelligence reports from Britain that underestimated the strength of the French fleet. Nevertheless, the suspicion must remain that mercenary motives caused him to reposition Hood and to remain with part of the British fleet at St. Eustatius.

Rodney further helped seal the fate of Cornwallis at Yorktown by failing to send timely and accurate intelligence of the French fleet to Sir Henry Clinton and Admiral Thomas Graves in New York. It was not until July 7 that Rodney warned Graves of de Grasse’s sailing for America. Because Graves was out at sea, he did not receive the letter in New York until August 16. Contrary to Rodney’s later claims, his message underestimated the threat, in the reasonable expectation that the French would split their fleet and send part of it to escort a homeward-bound convoy of merchant ships from the French Caribbean. Unaware that de Grasse had kept his fleet together contrary to instructions from France, Rodney gave the impression to the British generals that only part of the new French fleet was bound for America. On July 31, Rodney was disabused when he received new intelligence that de Grasse had sailed with his entire fleet of twenty-eight ships… and was likely to be reinforced by another French squadron in North America. Because he knew that de Grasse was accompanied by Virginia pilots who had boarded the French fleet at Saint-Dominique, Rodney was the first to realize that French intended to make their ‘grand effort’ in Virginia.