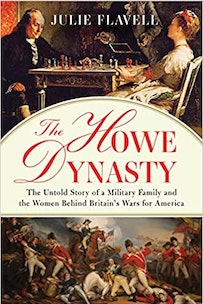 The Howe Dynasty: The Untold Story of a Military Family and the Women Behind Britain’s Wars for America by Julie Flavell

At the turn of the New Year in 1776-1777, Caroline Howe was watching the fortunes of her younger brothers, Richard Admiral Lord Howe and General Sir William Howe, with a close eye. They were commanding the British army and navy in the American war, and she had only recently celebrated their success at the Battle of New York with her London social circles in October 1776. Unbeknownst to them, General George Washington’s victories at Trenton and Princeton during the 10 Crucial Days in December and January would revive questions about the Howe family’s commitment to the cause. In early 1777, a growing number of critics cited recent defeats as evidence of the Howes’ military mismanagement at best and a Whiggish sympathy with the rebels at worst.

In The Howe Dynasty: The Untold Story of a Military Family and the Women Behind Britain’s Wars for America, author Julie Flavell goes beyond the familiar story of the two most famous Howe brothers to explore how the family experienced decades of social, political, and military conflict beginning with their other brother’s death at Fort Ticonderoga while fighting in the Seven Years' War in 1758. Spanning four wars in less than a century, Flavell focuses on the Howe family’s “crucial role — and their very personal odyssey — in the American Revolution.” She presents Caroline as a voice of authority in promoting and preserving their legacy, citing correspondence with Lady Georgiana Spencer that forms one of the most extensive private collections of letters in the British Library.

Read an excerpt about the Honorable Caroline Howe and her hopes for a promising new year, 1777.

Let us leave the Howes happy and triumphant as 1776 draws to a close. While a few pointed out that Washington had still not been decisively defeated, and his army had been allowed to escape to New Jersey, instead of remaining bottled up in freezing New England, New York was nevertheless safely in British hands and the rebels were in retreat. Caroline ended December with a stream of welcome news of her brothers’ successes. She had been ill a few days before Christmas, but she could not resist going to a dinner at the home of her old friends the D’Oylys, where she could dress informally and be comfortable. There, surrounded by a crowd of guests, she wrote to Lady Spencer that letters had reached the Howe women from the admiral, and the brothers were taking everything before them. William had landed in Connecticut, and, “on his first Landing, part of his army was engaged, as usual with success,” she could not help boasting. Eleven days after her evening at the D’Oylys’, Caroline received word of the capture of Fort Washington: “[T]wo thousand prisoners,” she exclaimed, “with very little loss on our side.” She could now name her brother “Sr. Wm. Howe,” and she was about to set out for an evening at Princess Amelia’s, where there were prospects of more delightful news of her heroic brothers. During December 1776, wherever Caroline went, she would only hear good of her beloved Richard and William.

The year 1777 would be an annus horribilis for the Howe dynasty, surpassed only by the tragedy of George’s death in America in 1758. The Howes saw their status as a military family disintegrate in the third year of the American War of Independence, when the tide turned against Britain. Character assassination by the British press would ultimately play a part in the brothers’ decisions to give up their commands. The chief target was William Howe, though he would never lose a major battle. While William’s star fell, that of his nemesis, General George Washington, steadily ascended on both sides of the Atlantic. The media-driven conspiracy theories that would soon be swirling around the brothers continue to this day to haunt the legacy of the Howe command in America.

As the year opened, the Howe women maintained their customary wartime roles of managing the reputations of their men in influential circles. But all control over the narrative of the brothers’ command would be wrested from the hands of Caroline and her kinswomen by the overwhelmingly negative newspaper coverage that gained traction in mid-1777, feeding the hunger for news in a national readership that was larger than that of any previous war of the century.

Early January, however, saw Caroline still basking in her brothers’ successes. She was in Oxfordshire at Phyllis Court, the Villiers family residence, where an extravagant Gala Week was planned. Lord Villiers and his friends had put together an amateur production of The Provoked Husband, a sentimental comedy by popular playwright Colley Cibber. What was originally intended as a private family entertainment swelled to three separate performances and drew in the surrounding neighborhood. A renowned French actor was engaged to follow up the play with a rendition of Ovid’s “Pygmalion.” A detailed and vivid account of the Gala Week has survived in a lady’s journal. It makes no mention at all of the war an ocean away.

Yet even during the holiday season of 1776 – 77, there was a trickle of criticism. A guest at the Villiers gala whispered a rumor that General Clinton was on his way back to London, discontented with his commander in chief. And sandwiched among the praises sung by the British press were carping remarks that the brothers had failed to defeat Washington decisively. In late January, the London Evening Post accused the North administration of exaggerating British successes in America, giving a “false varnish” to their victories. The reality, declared the paper, was that General Howe’s army could not venture very far outside of the city of New York. At this stage, such accusations circulated mainly through the medium of gossip rather than print. But transatlantic gossip traveled quickly — so efficiently, in fact, that it even posed problems for military security. Private letters from serving officers were sometimes published or read aloud in coffeehouses. Even mere talk could be reported; the gist of a conversation between Nisbet Balfour and an unnamed gentleman in London ended up in the Boston Gazette just a few months later. The press often shadowed what was being said in clubs, eateries, and fashionable salons.

In early 1777, a few discontented army personnel were muttering that the Howes had deliberately allowed General Washington to escape because the brothers had Whig sympathies. There were also whispers in New York that the Howes were in no hurry to wind up the war because they were making money from it. The suspicions were fed by a conviction that the Howes could have easily suppressed the rebellion in 1776, when they were commanders of the largest army Britain had ever assembled in America.

By attempting to win the hearts and minds of Americans, the Howe brothers hoped to deny Washington recruits, and the congressional leaders their power base in the civilian population. In the new year, William began recruiting loyalists to augment his own forces. New York was a fertile province for loyalist soldiers; by early January of 1777, William had two thousand provincials serving in the area. That winter, he offered pardons and bounties to rebel soldiers who would come over to the British lines and serve in a provincial corps. During 1777, more than three thousand loyalist soldiers were recruited; in 1778, when the British campaign had shifted to Pennsylvania , the total more than doubled, to more than seven thousand — a significant number of Americans fighting for the king. When Washington fought Howe at the Battle of Brandywine, thirty-five miles from Philadelphia, the American general had roughly twice as many men under his command, but it must be recalled that the recruiting area for the Americans in rebellion was always many times larger than that of the British. The competition for resources and men in America would be fierce, and would last as long as the war itself.

Julie Flavell, The Howe Dynasty: The Untold Story of a Military Family and the Women Behind Britain’s Wars for America (Liveright, 2021), 238-243.