The Burning of His Majesty’s Schooner Gaspee 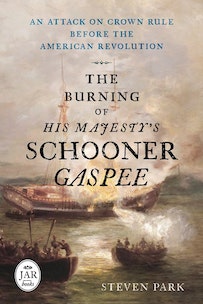 The Burning of His Majesty's Schooner Gaspee: An Attack on Crown Rule Before the American Revolution by Steven Park

Over one year before the Boston Tea Party, a group of colonial protestors captured and burned a British naval schooner stationed in Rhode Island waters. The Burning of His Majesty’s Schooner Gaspee: An Attack on Crown Rule Before the American Revolution by Steven Park examines this oft-forgotten moment that helped accelerate tensions between Great Britain and its American colonies. In early 1772, British Lieutenant William Dudingston arrived in Rhode Island's Narragansett Bay abroad the HMS Gaspee and aggressively enforced customs collections and cargo inspections. Dudingston cracked down on American smugglers, but he also incited anger among colonists by harassing some lawful ships. Park’s volume surveys the hostilities leading up to the colonial retaliation against the Gaspee and repositions the episode as a pivotal spark that re-ignited colonial resistance to British authority in the early-1770s.

The following except details the events of June 10, 1772, when the Gaspee ran aground and a group of Rhode Islanders, led by John Brown, attacked it.

Thirty-six-year-old John Brown called for eight longboats, each carrying five pairs of oars requiring ten rowers, to assemble at Fenner's Wharf. Brown put his employee Abraham Whipple in charge of the operation. At age 39, Whipple was an accomplished seaman and the brother-in-law of Chief Justice Stephen Hopkins. Daniel Pearce beat a drum along Main Street to call the raiders to Sabin's Tavern. Some men cast bullets in the kitchen of the tavern, and the raiders departed from Providence around 10:00 PM. Relatively fit men would have had no trouble rowing against the tidal current to get to Namquid Point in two hours' time. If another longboat had joined them from Bristol, it had a greater distance to travel, but the advantage of rowing with the tide. One anonymous source reported that the men blackened their faces and hands. Brown put a sea captain in charge of the tiller of each boat. Obviously, they could not hope to do anything until nightfall, and the month of June gave them the longest days of the year. Coming out of Providence, they would have to row against a flooding tide and muffle their oars and oarlocks in order to approach the Gaspee undetected. The raiders would want to arrive after the moon had set, which indeed they did.

In the darkness on June 10, 1772, Bartholomew Cheevers, the Gaspee's deck sentinel on watch at the time, spotted what he thought was just a pile of rocks, so he reported nothing. At 12:45 AM, he hailed the approaching longboats asking them to identify themselves. Dudingston came on deck, clad in his nightshirt, and repeated the call. Cheevers claimed that he tried to fire his musket but it misfired repeatedly. The commander called for light on the deck but had no success. He called for more small arms, but the arms chest was locked and the keys were down in his cabin.

Surely Dudingston must have had some concern about the readiness of his crew. He did not have the added protection of the Beaver. He had only nineteen men on board at the time. Indeed, he was on his way to Providence to pick up more men coming down from Boston. The men he had were below decks in their nightclothes, and tired from scraping the hull. The schooner's small arms chest was locked and the lanterns were not lit on deck.

Abraham Whipple raised his voice, identified himself as the sheriff of Kent County, and declared he was in possession of a warrant for Dudingston's arrest. Dudingston hollered back that the sheriff should return at a more appropriate hour. When men tried to board near the starboard forward shrouds, Dudingston struck someone with his sword and cut him. Then he called for all men on deck. Gaspeemidshipman William Dickinson claimed that the men in the boats gave " three cheers" and that the Gaspee deck lookouts then fired upon the boats with muskets. The men in the boats-Dickinson estimated half a dozen-returned musket fire, and the Gaspeelookouts responded with pistols. Already the raiding party was too close for the Gaspee to use its larger cannon; besides, the attackers approached directly at the bow. Ephraim Bowen claimed that he gave his gun to Joseph Bucklin, who proceeded to fire only one shot, which hit Dudingston in the left arm and groin. A minute later they boarded without further opposition over the starboard bow and quarter, not the more accessible stern. This indicates that the Gaspee was still listing significantly to starboard. Gaspeemidshipman Dickinson estimated that thirty or forty men (out of 150-200 total) boarded and overwhelmed the British schooner's crew. With their commander down, the crew was forced to surrender. The Rhode Islanders calling themselves the "captain" and the "head sheriff" gave their word that the Gaspee crew would not be harmed.

The raiding party seemed specifically interested in Dudingston and the pilot, Mr. Sylvanus Daggett. Local pilots who helped Royal Navy and customs vessels navigate the shallow waters that were utilized by smugglers were not popular among merchants and seafarers. While the raiders had brought doctors with them, they did not immediately tend Dudingston's wounds. Perhaps they expected to treat members of the raiding party only. Whipple and Brown allowed Dudingston to bleed on the deck, and later claimed that they thought he had been shot by his own men. Still not certain whether to let the lieutenant live or not, they made him beg for his life. They had Dickinson tied up in one of the boats for a half hour before he was summoned back onto the Gaspee to carry the lieutenant below. Apparently Whipple and Brown later rethought their actions and asked the commander if he had a surgeon on board. When he said that he had none, the raiders brought Dr. John Mawney up from the stern of one of the boats. Dudingston apparently wanted Dickinson to help them find material and make bandages. Dickinson went below and showed the "ringleaders of the mob" the officers' commissions, orders, and instructions, which the raiders took. This, of course, also gave the officers the much-needed artificial light to see the faces of their adversaries for later identification. Some of the papers went into the raiders' pockets; others went over the side and may or may not have made it into the boats. Regardless, the "ringleaders" saw Dudingston's commissions and deputations, and therefore could not claim that they thought Dudingston was acting without orders. Dickinson also claimed that he saw a "negro" (his word) holding Dudingston's sword. Peter May, a Gaspee mariner, testified that the raiders wanted remuneration for Jacob Greene's seized rum. They would take Dudingston's personal effects in exchange and return him to the schooner.

The wounded Dudingston and his crew were herded aboard the raiders' boats. While the Gaspee officers and crew were still angry, or afraid, or both, something unexpected happened. The dark, now moonless night sky of Narragansett Bay suddenly filled with a bright light as the schooner, which had been their home and fortress, burst into flames. Was it set aflame intentionally? Was it an accident? They watched from the boats as they were rowed quietly away; when the flames finally reached the powder magazine buried deep in the hull for protection, a dramatic explosion occurred that must have been heard for miles around. Light and sound filled the normally quiet coast, and Rhode Islanders were awakened from their slumber. There was very little of the Gaspee left to salvage. The Gaspee crew could see other longboats returning to Cranston and Providence. Ephraim Bowen, in his later recollection of events that night, claimed that it was the leaders of the raid who returned to burn the vessel, not some rogue element.