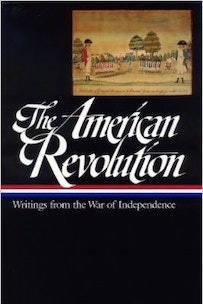 The American Revolution: Writings from the War of Independence

More than 200 years after Benedict Arnold's death, his name is still synonymous with treason. However, the details of his path from patriot to conspirator are less familiar. Prior to his betrayal of the American cause, Arnold was a celebrated general in the Revolutionary War. But by May 1779 he grew disillusioned with the cause for independence, and secretly approached the British to aid their war efforts. In September 1780 his plot to betray West Point was revealed, and Arnold officially took up arms with the British. On October 7, 1780, he made a public declaration explaining his reasons for this change in loyalty. The text is included in The American Revolution: Writings from the War of Independence, a compendium of letters, diary entries, newspaper articles, and public documents from the era, edited by John Rhodehamel. Arnold's letter 'to the Inhabitants of America' reveals the ideological shift he experienced over the course of the war.

I should forfeit even in my own Opinion, the place I have so long held in yours, if I could be indifferent to your Approbation, and silent on the Motives which have induced me to join the King's Arms.

A very few words, however, shall suffice upon a Subject so personal, for to the thousands, who suffer under the tyranny of the Usurpers in the revolted Provinces, as well as to the great multitude who have long wished for its Subversion, this instance of my Conduct can want no Vindication, as to that class of Men who are Criminally protracting the War from Sinister Views, at the expense of the Public Interest, I prefer their Enmity to their applause. I am only, therefore, Concerned in this address to explain myself to such of my Countrymen as want Abilities or Opportunities to detect the Artifices by which they are duped.

Having fought by your side when the love of our Country animated our Arms, I shall expect from your Justice and Candor, what your deceivers, with more Art and less honesty, will find it inconsistent with their own Views to admit.

When I quitted Domestick happiness for the Perils of the Field, I conceived the rights of my Country in Danger, and that Duty and Honor called me to her Defence--a Redress of Grievances was my only Object and aim; however, I acquiesced in a step which I thought precipitate the Declaration of Independence; to Justify the measure many plausible reasons were urged, which could no longer exist, when Great Britain with the open arms of a Parent offered to embrace us as Children, and grant the wished for redress.

And now that her worst Enemies are in her own bosom, I should change my Principles, If I conspired with their Designs. Yourselves being Judges, was the war the less Just, because Fellow Subjects were considered as our Foes? You have felt the torture in which we raised our arms against a Brother-God Incline the Guilty protractors of these unnatural Dissentions, to resign their Ambition, and Cease from their Delusions, in Compassion to kindred blood.

I anticipate your question: was not the War a defensive one until the French Joined in the Combination? I answer, that I thought so. You will add, was it not afterwards necessary till the Separation of the British Empire was compleat? By no means; in Contending for the Welfare of my Country, I am free to declare my Opinion, that this End attained, all strife should have ceased.

I lamented therefore the Impolicy, tyranny, and Injustice, which with a Sovereign Contempt of the People of America, studiously neglected to take their Collective Sentiments of the British proposals of Peace, and to negotiate under a suspension of Arms, for an adjustment of differences, as a dangerous Sacrifice of the great Interest of this Country to the Partial Views of a Proud, Antient, and Crafty Foe. I had my suspicions of some imperfections in Our Councils, on Proposals prior to the Parliamentary Commission of 1778; but having then less to do in the Cabinet than the Field (I will not pronounce peremptorily as some may, and perhaps Justly, that Congress have veiled them from the Publick Eye), I continued to be guided in the negligent Confidence of a soldier. But the whole world saw, and all America confessed, the Overtures of the Second Commission exceeded our wishes and expectations. If there was any Suspicion of the National liberality, it arose from its excess...

In the firm persuasion, therefore, that the private Judgment of any Individual Citizen of this Country is as free from all Conventional Restraints since, as before the Insidious offers of France, I preferred those from Great Britain, thinking it infinitely wiser and safer to cast my Confidence upon her Justice and Generocity, than to trust a Monarchy too feeble to establish your Independency, so Perilous to her distant Dominions, the Enemy of the Protestant Faith, and fraudulently avowing an affection for the liberties of mankind, while she holds her Native Sons in Vassalage and Chains.

I affect no disguise, and therefore Frankly declare that in these Principles, I had determined to retain my arms and Command for an opportunity to surrender them to Great Britain, and in concerting the Measures for a purpose, in my Opinion, as grateful as it would have been beneficial to my Country; I was only solicitous to accomplish an event of decisive Importance, and to prevent, as much as possible in the Execution of it, the Effusion of blood.

With the highest satisfaction I bear testimony to my old Fellow Soldiers and Citizens, that I find solid Ground to rely upon the Clemency of our Sovereign, and abundant Conviction that it is the generous Intention of Great Britain, not only to have the Rights and privileges of the Colonies unimpaired, together with their perpetual exemption from taxation, but to superadd such further benefits as may consist with the Common prosperity of the Empire. In short, I fought for much less than the Parent Country is as willing to grant to her Colonies, as they can be to receive or enjoy.

Some may think I continued in the struggle of those unhappy days too long, and other that I quitted it too soon. To the first I reply, that I did not see with their Eyes, nor perhaps had so favorable a situation to look from, and that to one Common Master I am willing to stand or fall. In behalf of the Candid among the latter, some of whom I believe serve blindly but honestly in the Ranks I have left, I pray God to give them all the lights requisite to their Own Safety before it is too late; and with respect to that kind of Censurers whose Enmity to me Originates in their hatred to the Principles, by which I am now led to devote my life to the Reunion of the British Empire, as the best and only means to dry up the streams of misery that have deluged this country, they may be assured that, Conscious of the Rectitude of my Intentions, I shall treat their Malice and Calumnies with Contempt and neglect."

Arnold, Benedict. "To the Inhabitants of America." In The American Revolution: Writings from the War of Independence, edited by John Rhodehamel, 592-595. New York: Library of America, 2001.