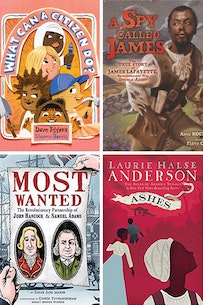 At Museum of the American Revolution, we believe that stories are a gateway into history. When we introduce the events that led to creation of the nation as more than facts on the page, but as the lived experiences of real people from all walks of life, young people can begin to see themselves in this story and understand their role in continuing it. Below, please find some books for all ages we think will inspire your own young revolutionary.

The founders of the United States declared that consent of the governed was a key part of their plan for the new nation. But for many years, only white men of means were allowed to vote. This unflinching and inspiring history of voting rights looks back at the activists who answered equality’s call, working tirelessly to secure the right for all to vote, and it also looks forward to the future and the work that still needs to be done.

Leave It to Abigail! The Revolutionary Life of Abigail Adams

Everyone knew Abigail was different. Instead of keeping quiet, she blurted out questions. Instead of settling down with a wealthy minister, she married a poor country lawyer named John Adams. Instead of running from the Revolutionary War, she managed a farm and fed hungry soldiers. Instead of leaving the governing to men, she insisted they “Remember the Ladies.” Instead of fearing Europe’s kings and queens, she boldly crossed the sea to represent her new country. And when John become President of the United States, Abigail became First Lady, and a powerful advisor.

Across the course of several seemingly unrelated but ultimately connected actions by different children, we watch how kids turn a lonely island into a community—and watch a journey from what the world should be to what the world could be. This is a book about what citizenship—good citizenship—means to you, and to us all.

Corretta Scott King Award Winner — The home of the United States president was built by many hands, including those of the enslaved, long before there were machines to do those same jobs. Stunning illustrations bring to life the faces of those who endured hard, brutal work to create this iconic emblem of America, brick by brick.

Bones in the White House

Everybody knows about the Founding Fathers and the Declaration of Independence in 1776. But the founders weren't the only ones who believed that everyone had a right to freedom. Mumbet, an enslaved woman in Massachusetts, believed it too. She longed to be free, but how? Mumbet was determined to try.

A Ben of All Trades: The Most Inventive Boyhood of Benjamin Franklin

Young Benjamin Franklin wants to be a sailor, but his father won’t hear of it. The other trades he tries — candle maker, joiner, boot closer, turner — bore him through and through. Curious and inventive, Ben prefers to read, swim, fly his kite, and fly his kite while swimming. But each time he fails to find a profession, he takes some important bit of knowledge with him. That tendency is exactly what leads him to become the astonishingly versatile genius we remember today.

Told for the first time in picture book form is the true story of James Lafayette—a slave who spied for George Washington’s army during the American Revolution. But while America celebrated its newfound freedom, James returned to slavery. His service hadn’t qualified him for the release he’d been hoping for. For James the fight wasn’t over; he’d already helped his country gain its freedom, now it was time to win his own.

Most Wanted: The Revolutionary Partnership of John Hancock and Samuel Adams

John Hancock and Samuel Adams were an unlikely pair of troublemakers. Hancock was young and dashing. Adams was old and stodgy. But working together, they rallied the people of Boston against the unfair policies of Great Britain and inspired American resistance.

Fort Mose: And the Story of the Man Who Built the First Free Black Settlement in Colonial America

Beginning with the story of Francisco Menendez, the Captain of the Black Militia of St. Augustine, FORT MOSE follows the history of slavery from West Africa to America, recounts what daily life was like, and describes the founding of the Spanish colony’s Fort Mose. Established in 1738, Fort Mose gave sanctuary to escaped Africans, challenging slavery in the English colonies. Approximately one hundred Africans lived together, creating a frontier community that drew on a range of African backgrounds, blending them with those of Spanish, Native American, and English people and cultural traditions.

Anna Strong: A Spy During the American Revolution

Anna Smith Strong (1740–1812) was a fearless woman who acted as a spy for George Washington during the Revolutionary War. Recruited by Washington’s spymaster, Major Benjamin Tallmadge, she joined the Culper Ring, a group of American spies. General Washington placed a huge amount of trust in his spies, and Anna helped pass him important messages at a great risk to herself and her family. Thrilling and dramatic, Anna Strong tells the story of how one brave woman helped change the course of American history. The book includes an author’s note, a bibliography, an index, and a spy code so kids can get involved in the action.

Captured at sea . . . a young man must choose between his country and his freedom. The Atlantic Ocean, 1781. James Forten is a free African American sailor on an American ship, the Royal Louis, during the Revolutionary War. After his ship is captured by the British, he becomes a prisoner on the Amphion. James worries that he will be sold as a slave. Will James ever see his home again?

This young readers edition of Dunbar's National Book Award-nominated title details the account of Ona Judge, who ran away from the household of George and Martha Washington. Born into slavery at Mount Vernon, Judge began working directly for Martha Washington by the age of 10. When the Washingtons left Mount Vernon for George's political career, Judge was chosen to make the trip north, visiting and eventually living in Pennsylvania and New York. Away from the sheltered world of Virginia, Judge encountered free black people for the first time and learned about laws such as the Gradual Abolition Act in Pennsylvania. The Washingtons went to great lengths to prevent those they enslaved from benefitting from this law. In May of 1796, then 22-year-old Judge walked out of the Washington's mansion in Philadelphia and onto the deck of a ship that would take her to New Hampshire. Although she was never able to live comfortably, she refused to go back to a life of slavery-no matter how determined George and Martha Washington were to re-enslave her.

Return to the American Revolution in this blistering conclusion to the Seeds of America trilogy which Kirkus Reviews called “the best book you’ll ever read.” As the Revolutionary War rages on, Isabel and Curzon have narrowly escaped Valley Forge—but their relief is short-lived. Before long they are reported as runaways, and the awful Bellingham is determined to track them down. With purpose and faith, Isabel and Curzon march on, fiercely determined to find Isabel’s little sister Ruth, who is enslaved in a Southern state—where bounty hunters are thick as flies. Heroism and heartbreak pave their path, but Isabel and Curzon won’t stop until they reach Ruth, and then freedom, in this grand finale to the acclaimed New York Times bestselling trilogy.

Assuming the identity of the drowned Emmeline Coates, Frannie is rescued by a British merchant ship and sails with the crew to New York. For the next three years, Frannie lives a lie as Miss Coates, swept up in a courtship by a dashing British lieutenant. But after witnessing the darker side of the war, she realizes that her position gives her power. Soon she's eavesdropping on British officers, risking everything to pass information on to George Washington's Culper spy ring as agent 355. Frannie believes in the fight for American liberty--but what will it cost her? Inspired by the true "355" and rich in historical detail and intrigue, this is the story of an unlikely New York society girl turned an even unlikelier spy.

Family Programs are supported by a major grant from the Stavros Niarchos Foundation.