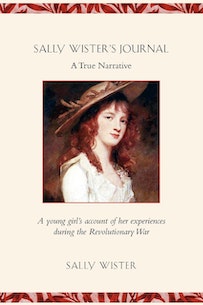 When the British Army moved to occupy Philadelphia in September of 1777, sixteen-year-old Sally Wister fled with her Quaker family. While in the relative safety of the countryside, Sally began to keep a journal of her experience for her friend, Deborah (Debbie) Norris. Written over a nine-month period, Sally charmingly documented for Debbie her occasional adventures and mild flirtations with the various officers and soldiers who passed through the area. Recording an unusual side of the war, Sally’s journal offers a lively and accessible perspective of life during the occupation of Philadelphia.

The opening entries of the journal, excerpted below, were written as the British marched towards Philadelphia and Sally fretted over the “uncertainty” of her and Debby’s positions “in the midst of war, and ruin, and the clang of arms.”

Tho' I have not the least shadow of an opportunity to send a letter, if I do write, I will keep a sort of journal of the time that may expire before I see thee: the perusal of it may some time hence give pleasure in a solitary hour to thee and our Sally Jones.

Yesterday, which was the 24th of September, two Virginia officers call'd at our house, and inform'd us that the British Army has cross'd the Schuylkill. Presently after, another person stopp'd, and confirm'd what they had said, and that Gen'l Washington and Anny were near Pottsgrove. Well, thee may be sure we were sufficiently scared; however, the road was very still till evening.

About seven o'clock we heard a great noise. To the door we all went. A large number of waggons, with about three hundred of the Philadelphia Militia. They begged for drink, and several push'd into the house. One of those that entered was a little tipsy, and had a mind to be saucy.

I then thought it time for me to retreat; so figure me (mightily scar'd, as not having presence of mind enough to face so many of the Military), running in at one door, and out another, all in a shake with fear; but after a while, seeing the officers appear gentlemanly, and the soldiers civil, I call'd reason to my aid. My fears were in some measure dispell'd tho' my teeth rattled, and my hand shook like an aspen leaf. They did not offer to take their quarters with us; so, with many blessings, and as many adieus, they marched off.

I have given thee the most material occurrences of yesterday faithfully.

This day, till twelve o'clock, the road was mighty quiet, when Hobson Jones came riding along. About that time he made a top at our door, and said the British were at Skippack road; that we should soon see their light horse, and [that] a party of Hessians had actually turn'd into our lane. My Dadda and Mamma gave it the credit it desrve'd, for he does not keep strictly to the truth in all respects; but the delicate, chicken-hearted Liddy and I were wretchedly scar'd. We cou'd say nothing but "Oh! what shall we do? What will become of us?" These questions only augmented the terror we were in.

Well, the fright went off. We saw no light horse or Hessians. O. Foulke came here in the evening, and told us that Gen'l Washington had come down as far as the Trappe, and that Gen'l McDougle's brigade was stationed at Montgomery, consisting of about 16 hundred men. This he had from Dr. Edwards, Lord Stirling's aid-de-camp; so we expected to be in the midst of right army or t'other.

We were not alarm'd.

We were unusually silent all the morning; no passengers came by the house, except to the Mill, & we don't place much dependence on Mill news.

About twelve o'clock, cousin Jesse heard that Gen. Howe's army had moved down towards Philadelphia. Then, my dear, our hopes&. fears were engaged for you. However, my advice is, summon up all your resolution, call Fortitude to your aid, and don't suffer your spirits to sink, my dear; there's nothing like courage; 'tis what I stand in need of myself, but unfortunately have little of 1t m my compos1t1on.

I was standing in the kitchen about 12, when some~ body came to me in a hurry, screaming, "Sally, Sally, here are the light horse! This was by far the greatest fright I had endured ; fear tack'd wings to my feet; I was at the house in a moment; at the porch I stopt, and it really was the light horse.

I ran immediately to the western door, where the family were assembled, anxiously waiting for the event They rode up to the door and halted, and enquired if we had horses to sell; he was answer'd negatively.

"Yes, but have no mind to dispose of them."

My terror had by this time nearly subsided. The officer and men behav'd perfectly civil; the first drank two glasses of wine, rode away, bidding his men follow, which, after adieus in number, they did. The officer w.1s Lieutenant Lindsay, of Eland's regiment, Lee's troop. The men, to our great joy, were Americans, and but 4 in all. What made us imagine them British, they wore blue and red, which with us is not common.

It has rained all this afternoon, and to present appearances, will all night In all probability the English will take possession of the city to-morrow or next day. What a change will it be! May the Almighty take you under His protection, for without His divine aid all human assistance is vain.

"May heaven's guardian arm protect my absent friends, From danger guard them, and from want defend."

Forgive my dear, the repetition of these lines, but they just darted into my mind. Nothing worth relating has occurred this afternoon. Now for trifles. I have set a stocking on the needles, and intend to be mighty industrious. This evening some of our folks heard a very heavy cannon. We supposed it to be fir'd by the English. The report seem'd to come from Philada. We hear the American army will be within five miles of us tonight.

The uncertainty of our position engrosses me quite. Perhaps to be in the midst of war, and ruin, and the clang of arms. But we must hope the best

Here, my dear, passes an interval of several weeks, in which nothing happen'd worth the time and paper it wou'd take to write it The English, however, in the interim, had taken possession of the city.