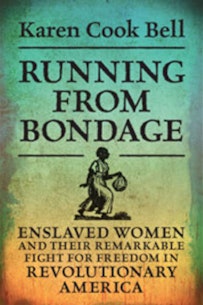 Running from Bondage: Enslaved Women and Their Remarkable Fight for Freedom in Revolutionary America by Karen Cook Bell

How can we imagine how the Revolution changed the lives of everyday people? What daily decisions and conditions inspired individuals and groups to take dramatic action? For enslaved and fugitive Black women and girls in regions across colonial America, the Revolutionary War presented opportunities to strategize acts of political resistance and seek freedom.

In Running from Bondage: Enslaved Women and Their Remarkable Fight for Freedom in Revolutionary America, Dr. Karen Cook Bell analyzes details in advertisements for runaway and captured enslaved people, printed in the 1770s to about 1800, to emphasize the chances taken by these ‘Black founding mothers’ and the important contributions they made to the cause of liberty. According to Cook Bell, two wars were waged during the Revolutionary era: a political revolution for independence from Great Britain and a social revolution for emancipation and equality in which Black women and girls of diverse circumstances played an active role.

Learn about “a well dressed woman named Jenny” named as a fugitive in Purdie’s Virginia Gazette on April 11, 1777, and compare her story to her contemporaries including women like Hannah Till, who worked as a free servant in General George Washington’s wartime encampments.

During the American Revolution, one-third of runaways were women and more than half fled in groups rather than alone. By contrast, prior to the Revolution, nearly 87 percent of colonial runaways were male, and about two-thirds fled alone. Roughly 25 percent fled in family groups consisting of husbands, wives, and young children. Enslaved women pursued multiple avenues to gain freedom during the Revolutionary Era. Some, like forty-year-old Sarah of Pennsylvania, made plans to reach New York City on the eve of the Revolution on October 24, 1769, where ships headed for other northern ports docked. Others, like twenty-three-year-old Bellow, who was born in Barbados, sought to find refuge away from her enslaver’s home on Broad Street in New York City on April 28, 1770 Others, like “Free Fanny,” claimed freedom by running away on Christmas Day 1770 from her enslaver’s estate in Essex, Virginia. To migrate to another city or colony may seem to have been an improbable proposition for women in bondage. Going to town or to another colony implied that they had knowledge of the geography and topography of the area. The enslavers of eighteen-year-old Lydia (mentioned earlier) remarked that she had traveled the road to Williamsburg several times and was familiar with the route since she had attempted escape on more than one occasion. The escape of many enslaved women was polycentric (having more than one center) in that they attempted to flee more than once.

Southern cities and Northern colonies were open spaces for freedom-seeking women during the Revolutionary era. They could find refuge with the British, escape to Black enclaves in the cities and pass as free women, as well as find refuge with Native Americans. In some cases, women found refuge in the woods and swamps because “there was no other place of concealment and freedom for them.” They experienced what Damian Pargas describes as an “informal freedom,” spaces within slaveholding regions where enslaved people attempted to escape by blending in with the free Black population. As they experienced this “informal freedom,” women truants in rural areas embraced the ecology. Women had knowledge of the fauna and flora, the animals and plants they would find, and what vegetation they should not eat. They also had familiarity with changes in the weather and had family and friends nearby.

The story presented in these pages is unique. It examines the ways in which women’s escape undergirded notions of womanhood, motherhood, and freedom. The war bolstered the independence of fugitive Black women, gave them increased access to their families with whom they fled, and greater autonomy in their day-to-day lives once they reached safe havens. Women ran away during the Revolutionary and post-Revolutionary period to claim their liberty, an act which they viewed as consistent with the ideals enunciated in the Declaration of Independence. Underlying the causes of their flight were efforts to defend their bodies and womanhood against exploitation, as well as to protect their children from the deleterious effects of the institution of slavery.

During the Revolution, women not only ran away with immediate family members, but also in groups without established kinship relations. They correctly perceived that their best chances for freedom resided with a British victory and a disruption of the existing social order. In the north and south, women fled to urban centers, took refuge in British camps, aided the Loyalist cause as spies, cooks, nurses, and performed duties for the British Army Ordnance Corps. In the postwar period, most Black women did not seek freedom in the North, but instead pursued “informal freedoms” in urban cities such as Baltimore, Richmond, Charleston, Savannah, and New Orleans where they defined freedom in terms of family and mobility. In these cities, they relied on networks of acquaintances, marketable skills, clothing, and language skills to assume identities as free women and carve out free spaces for themselves.

By September 1776, Jenny, a “well dressed” twenty-five-year-old enslaved woman who lived on a farm on Monk’s Neck, thirteen miles from Petersburg, Virginia, was eight months pregnant. Over the past eight months, she had surely overheard her enslaver, Allen Freeman, discussing the ongoing crisis with Great Britain. She had heard of Dunmore’s Proclamation through the enslaved internal communication network. She knew that if she were to reach the lines of the British Army, both she and her two-year-old daughter Winney could claim their freedom from bondage. Allen Freeman would go on to serve in the Revolutionary War in defense of American independence. Throughout the early months of 1776, Virginians were feeling the impact of Dunmore’s Proclamation. Enslaved men, women, and children were leaving farms and plantations to catch the breath of freedom. Monk’s Neck, located in Dinwiddie County, where the nation’s first free Black eighteenth-century rural physician Dr. Thomas Stewart resided, included several farms where tobacco, cereals, and grains were produced. Jenny spent months planning her escape, intending to leave with her daughter at night to avoid detection. They would travel the road that hundreds of other fugitives walked to reach Richmond, the nearest city, to pass as free persons, in hopes of reaching a British vessel. She took several garments with her in preparation for the fall weather, which included “a green shalloon gown, a pale blue durants quilt …, a white Virginia cloth cotton coat and waistcoat, [ a ] coat and waistcoat striped with copperas and blue, and another suit checked with blue.” Her enslaver noted that her daughter is “cloathed [sic] like her and she generally goes well dressed.” At the time Allen Freeman placed the advertisement for Jenny on April 11, 1777, she had been a fugitive for seven months .

None of Jenny’s probable movements, the impetus of her flight, or her experience in fugitivity, are recorded in the existing archives. Still, it is certain that the publicity and intention of the runaway ad challenged her concealment and freedom. If fugitivity is “the artful escape of objectification” (racial, commodified, legal/political), Jenny’s disappearance was a defiant act against these constraints. Fugitive women “subverted the very paradigm of enslavement – immobility, disembodiment, violation – and created an alternative self ” by pursuing a rival geography. The discourse of runaway advertisements remained an ever - looming and corporeal threat for the absconding slave. According to Marisa Fuentes, “ this discursive power combined with the legal right of whites to interrogate, inspect, probe, and detain any Black suspect made fugitivity both an insecure and defiant status.” In Virginia, laws enacted in 1723 and 1748 prescribed punishment by dismemberment for attempts at escape. Consequently, fugitivity embodied both a critique of slavery and the precarity of the fugitive condition. Yet, the Revolutionary War bolstered the independence of Black women, gave them increased access to their families with whom they fled, and greater autonomy in their daily lives once they reached safe havens.

[...] as domestics, Black women would be under close surveillance of housewives and hence had fewer opportunities to escape than did men, whose work frequently kept them outdoors. Yet, enslaved women took advantage of every opportunity to escape bondage. In the New England region, 1776 was a watershed year for escapees. As free Black men were welcomed to serve in the Patriot Army in 1776 following General George Washington’s reversal of an earlier policy which prevented their enlistment, enslaved women made plans for their own declaration of independence from bondage. Sarah Seheter, a Boston fugitive in 1776, had been in servitude in both Providence, Rhode Island, and Concord, Massachusetts. She had labored as a cook, laundress, and maid in the homes of prominent New England families. She was also skilled in the domestic arts of spinning, knitting, and weaving. Drawing inspiration from the revolutionary climate which permeated Boston in 1775–1776, Sarah made a daring run for freedom. The Siege of Boston that lasted from April 19, 1775 until March 17, 1776 marked the opening phase of the Revolutionary War and proved an opportune time for enslaved women like Sarah to escape.

In a few cases, enslaved women who chose not to flee were hired out during the Revolutionary War and their service provided invaluable support to the Patriot war effort. Fifty-six-year-old Hannah worked with her husband Isaac as a cook at Valley Forge headquarters. Hannah was permitted to keep forty shillings a month from her wages for clothing and necessities. The remainder of her salary went directly to her enslaver, Rev. John Mason of New York. Mason allowed Hannah to purchase her freedom for fifty-three pounds, which Hannah did sometime between December 1778 and June 1780. On December 19, 1778 Mason wrote that he received thirty-two pounds New York currency in “full for my servant Hannah’s wages who was in the service of His Excellency General Washington.” On a June 23, 1780 receipt for eighty-six dollars “in full for two months wages at His Excellency George Washington’s family,” Hannah signed the receipt Hannah Till with an X for her signature. She discarded her enslaver Mason’s name , which had been used on previous receipts. Hannah’s husband Isaac would also purchase his freedom. After the war ended, Hannah and Isaac lived in Philadelphia at 182 South Fourth Street. General Lafayette, whom Hannah was loaned to during the war, later paid off the mortgage on Hannah’s Philadelphia home. Hannah died in 1825 at the age of 104.

Another woman with Washington’s family at Valley Forge was Margaret Thomas, a washerwoman, seamstress, and free Black woman. Margaret was possibly married to William Lee, Washington’s body servant. She received pay for providing sewing services to Washington in February 1776. After the war, Margaret lived with Isaac and Hannah Till in Philadelphia, an indication of the close bonds that developed during the war. Seeking to reunite William Lee with Margaret, Washington wrote to Clement Biddle in Philadelphia for assistance after Lee asked that Margaret be allowed to join him at Mount Vernon. William Lee had served Washington admirably during the war and Washington sought to reward his service. Biddle was asked to arrange transportation for Margaret Thomas from Philadelphia to Mount Vernon by sea or stage. Margaret Thomas, however, did not come to Mount Vernon to live in a slave society where her freedom might have been jeopardized.