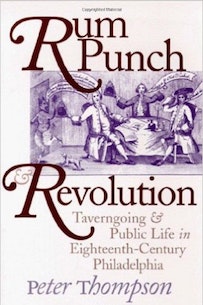 In Peter Thompson’s Rum Punch and Revolution: Taverngoing and Public Life in Eighteenth-Century Philadelphia, taverns and public houses function simultaneously as private-public spaces where people of “mixed” backgrounds could mingle, drink, and eat together. (In this case, mixed does not include slaves, apprentices or Native Americas, who were excluded by law from taverns.) This openness in early tavern culture fostered an environment where men and women of varying social rank would gather and participate in a shared political and social discourse.

The following excerpt highlights the changing culture surrounding taverns and political life on the eve of the Revolution as delegates to the First Continental Congress gathered at the City Tavern in 1775.

In 1773 Philadelphia's first gossip columnist, "Polinurus Pepper, Esq.," wrote that he expected the "political, commercial, literary and religious interests of the province" to be "learnedly discussed by many a knot of grave and sensible freeholders" at the City Tavern. Neither Pepper nor the patricians who flocked to the City Tavern believed that learned discussion of provincial affairs was a regular feature of exchanges in most, if any, of Philadelphia's existing taverns. Well-to-do Philadelphians subscribed to the new tavern precisely because they were dissatisfied with the conversation, and much else, on offer in the rest of the city's public houses. The "grave and sensible freeholders" who patronized the City Tavern consciously sought to create a visible and audible discursive distinction between the supposedly dispassionate, rational, independent, and objective social behavior and observation conducted in their house and passionate, irrational, and dependent speech and behavior encountered in the city's other public houses. The City Tavern's patrons sought to establish that their discussions were of different, higher quality than those found in other, lesser houses. As they sought to breathe life into their expectations, patrons of the City Tavern made use of the one advantage they had over patrons of the Four Alls: their access to state and congressional leaders.

On the very day that John Adams arrived in Philadelphia to take up his seat in the First Continental Congress, he was met by a delegation of prominent Philadelphians and whisked away to the City Tavern. Here he received "a fresh welcome to the city" and further introductory conversation. Adams and his fellow delegates were eventually treated to a supper "as elegant as ever was laid upon a table." Adams was quick to pronounce the City Tavern the most genteel establishment of its kind in America and became a regular patron. Like Adams, George Washington chose to "sup" at the City Tavern on the very evening of his arrival, before he had even visited his lodgings. Other congressional delegates…used the City Tavern as an informal clubhouse. As early as May 1775, George Read noted, "a few of us have established a regular table for each day in the week save Saturday when there is a general dinner-our daily table is formed by the following persons . . . Randolph, Lee, Washington . . . Harrison, Alsop . . . Chase and Rodney."

The prospect of access to the chatter produced by such gatherings prompted Joseph Galloway, an opponent of independence, to welcome the decision to convene a Continental Congress grudgingly. "Having these gentlemen at the scene of action," he wrote, "we shall no longer be misled by newspaper accounts and private letters, but shall proceed on solid information and principles of safety." Similar considerations led local and national committees to choose the City Tavern as a site for their meetings. In 1775 the Pennsylvania subcommittee of the Congressional Committee of Observation, Inspection, and Correspondence began regular meetings at the City Tavern. They were joined in February 1776 by the standing committee of five charged with superintending the congressional treasury. Such committee business, along with the custom of state and national politicians and officers, returned to the City Tavern following the British evacuation of Philadelphia in 1778, despite the fact that the tavern had continued trading during the occupation. So close was the tavern's continuing association with the workings of government that the visiting French marquis de Chastellux could comment in 1780, "it must be understood that the delegates [to the Continental Congress] …have a tavern to themselves."

During the Revolution, the tavern's patrons went out of their way to stifle dissent and enforce political consensus. For example, the congressional dining circles at the City Tavern noted by George Read in 1775 and the marquis de Chastellux in 1780, reflected sectional divisions. But even after obvious opponents of independence had been banished from the tavern, social events were threatened by arguments over commitment to America's cause. In 1781 the managers of Philadelphia's Dancing Assembly, which then met in the City Tavern's long gallery, appealed to lukewarm patriots to stay away from their dances:

It is expected that no man who has not taken a decisive part in favor of American independence will, in future, intrude on the Dancing Assembly of this city: such characters arc either too detestable or too insignificant for Whig Society. The company of those who were so insensible of the rights of mankind and of personal honor, as to join the enemies of their country in the most gloomy moment of the revolution, cannot be admitted. The subscription paper, thro[ugh] accident, has been handed to some characters of this description.

The marquis de Chastellux attended an assembly dance at the City Tavern in the course of a visit to Philadelphia in 1780. He was surprised to find that "like the 'toasts' one drinks at table" the dances had "a marked connection with politics." The managers named one dance "the success of the campaign"; another, "Burgoyne's defeat." Chastellux was not alone in finding that effort made by the assembly's managers to ensure one, and only one, meaning would be read into the evening's program made for "methodical" amusement. By 1785 pleasure gardens, parks, and purpose-built assembly rooms had begun to supplant the City Tavern's long gallery as the place to see and be seen, as Philadelphians, rich and middling, searched for a sociability among company that would refrain from pouncing on the political significance of every last detail of speech and deportment. Moreover, by the 1790s purpose-built and economically viable hotels offered "respectable" citizens more in the way of space, privacy, and propriety than lodgings at the City Tavern while exclusive and specialised mercantile exchanges and bureaus offered ever more reliable or valuable information. In short, the well­documented history of the rise and fall of this one tavern offers a microcosm of the major developments affecting the trade as a whole in the last quarter of the eighteenth century.