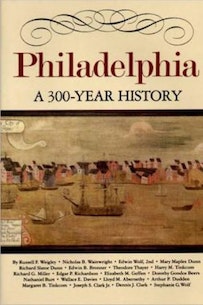 As war crept up on Philadelphia in 1776, the city's leaders and residents prepared for a potential invasion by British forces. In this excerpt from Philadelphia: A 300-Year History, edited by Russell F. Weigley, we see how the year's events led an uneasy population to shore up their defenses and eventually flee.

Until the spring of 1776 Philadelphia experienced the milder and more pleasant sights and sounds of war — the parades, cheers on the training grounds, and the thrilling roll of drums. Then in March the British frigates Roebuck and Liverpool appeared at the mouth of Delaware Bay and instituted a blockade. The sealing of the harbor was virtually complete, and the shipping that had been the life blood of Philadelphia stood idle; but the demand for the manufacture of munitions, clothing, and equipment for the soldiers was so great, and consequently such was the demand for capital and labor, that the blockade had remarkably little impact on the city's prosperity. In May the first local armed clash occurred, when the Roebuck and the Liverpool ventured up river and engaged thirteen Pennsylvania galleys and the Continental sloop Reprisal near the mouth of the Christiana River. Spectators gathered on both banks of the Delaware. All turned out well when the intruders retired down the river under fire.

The news of the fighting that took place between the American and British forces in and around New York during August and September alternated between bad and terrible. General Washington and the Continental Army were defeated in a series of engagements by the British army under Gen. Sir William Howe, and in November the remnants of Washington's badly mauled forces retreated across New Jersey toward the Delaware. Previously the Pennsylvania Council of Safety, apprehensive that Howe would invade the state, had asked Congress to consider the possibility of stationing troops near Philadelphia, and to name a general officer to command them. Congress had no troops to spare, but on November 11, 1776, it did ask the Continental Board of War, its military administrative agency, to confer with the Council of Safety on Philadelphia's defense. To consolidate defense Congress asked Washington to take direct command of all the troops in the Northern Department that had been raised in Pennsylvania and New Jersey...

In the deepening crisis David Rittenhouse, vice-president of the Council of Safety, warned the city that only vigorous action could save it from invasion. To inspire courage and enthusiasm, onNovember 28 he and Thomas Mifflin, now quartermaster general of the Continental Army, addressed a mass meeting in the State House Yard. About 2000 men in the city responded to their appeals by taking up arms. The Philadelphia Associators, who about this time were reorganized as the Philadelphia Brigade, went into active service and eventually fought creditably. But while the city responded reasonably well to the military emergency, the countryside appeared lethargic, indifferent, and sometimes hostile to the cause. The countrymen's failure to rally, and the apparent hopelessness of stopping the numerically and qualitatively superior British army, deepened the fear and frustration in the city, and thousands began leaving for the country as reports of British progress filtered in. When it was learned that the enemy had reached New Brunswick, the Council of Safety requested that the schools be closed and that all inhabitants immediately spring to the city's defense. By December 7 the Council thought that the British 'may be hourly expected' in Pennsylvania, but curiously enough it asked that the 'Schools in the City be opened on Monday next, and the Education of Youth be carried on as usual.'

The situation had not improved in the slightest, however, and while the children were thinking of resuming their studies, Congress was contemplating departure from a city that apparently could not be defended. But before it decamped on December 12 and headed for Baltimore, it made some last desperate efforts to save its place of residence. On December 9 it reinforced Washington's repeated requests for troops by asking the Council of Safety to scour the backcountry, and among other actions it directed the commanding officer in the city, Maj.-Gen. Israel Putnam, to defend it 'to the utmost extremity.' Putnam imposed martial law, announced a ten o'clock curfew, and in the face of a general flight, ordered the inhabitants out to dig entrenchments.

Before the disorderly exodus from the city ended about half of the people had fled, and the roads to the west were covered with escapees in carts and wagons of all descriptions. 'This city was, for days,' wrote Robert Morris on December 21, 'the greatest scene of distress that you can conceive; everybody but Quakers were removing their families and effects, and now it looks dismal and melancholy.' To add to the misery and disorder, smallpox and camp fever spread among the soldiers in epidemic proportions. The dead were buried by the hundreds in long shallow trenches in the area of the Walnut Street Prison.

Then, amid the pervasive gloom that marked the nadir of the revolutionary cause, came news of Washington's victory at Trenton on December 26. Four days later hundreds of Hessians captured in the fighting were marched through Philadelphia's streets. Returning to New Jersey to fight again at Princeton on January 3, Washington cleared the enemy from that state, except in the easternmost part, and went into winter quarters near Morristown...

When the threat of invasion had receded, Philadelphia once again became its former bustling self as thousands of refugees returned. Congress too came back in March 1777, openly unrepentant, but nevertheless somewhat chagrined over its hasty departure.

"Many suspected, however, that the city enjoyed a reprieve that was merely temporary, for every month that followed brought its alarms...