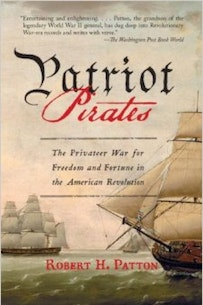 Patriot Pirates: The Privateer War for Freedom and Fortune in the American Revolution by Robert Patton

Containing tales of danger, greed, and patriotism, Robert H. Patton's Patriot Pirates: The Privateer War for Freedom and Fortune in the American Revolution presents the story of America's seaborne insurgency against British merchant ships and Navy. Privateering, a wartime tactic authorized by Congress and financed by men such as Robert Morris and Nathanael Greene, proved to be a sketchy endeavor for many who took to the high seas to seek their fortunes in an uncertain war.

The following excerpt recounts the experiences of Andrew Sherburne during his time at sea in the young Continental Navy and abroad a privateer ship that took him from New Hampshire to Charleston, from Canada and England during the American Revolution.

The 18-gun sloop Ranger, outfitted at Portsmouth, New Hampshire, by John Langdon in 1777, had wreaked havoc off Scotland and Ireland under John Paul Jones. After Jones was detached to command Bonhomme Richard two years later, Ranger returned to refit for a cruise to the Caribbean.

Visiting the town waterfront with his father one day, young Andrew Sherburne found it a stirring pageant of color and industry.’ Ships were building, prizes taken from the enemy unloading, privateers fitting out, standards waved on the forts and batteries, the exercising of soldiers, the roar of cannon, the sound of martial music and the call for volunteers so infatuated me that I was filled with anxiety to become an actor in the scene of war.’

His father let him join Ranger’s crew only because it was ‘in service of Congress’ and not a seedy privateer. Despite the precaution, life on shipboard introduced the boy to boxing, drinking, and the ‘abominable practice’ of cursing. ‘There was a necessity for it,’ Andrew wrote in his memoir many years later. ‘To counterbalance my guilt I became more constant in praying. I prayed every night to atone for the sins of the day.’

Seasick most of the time, he waited on Ranger’s officers and ‘in time of action’ carried ammunition to ‘the third gun from the bow.’ One prize, the three-deck Holderness looted with cotton, sugar, rum, and spices, made the voyage a hit. And because it was armed with twenty-two cannon (‘her crew was not sufficiently large to manage them’), the transport was designated a warship and thus awarded 100 percent to its captors.

Sherbume's naval salary was $6.66 a month. His share of Holderness's loot was ‘one ton of sugar, from thirty to forty gallons of fourth-proof Jamaica rum, about twenty pounds of cotton, approximately twenty pounds of ginger, log-wood, and allspice, and about $700 in paper money equal to one hundred dollars in specie.’ At age fourteen, he'd become his family's star breadwinner.

In the spring of 1780 Ranger took part in the failed defense of Charleston against an assault of British land and naval forces. It was Sherburne's first heavy combat. The explosion of an artillery shell ‘within a few feet of me’ left him ‘much alarmed’ and ‘in continual apprehension’ for the much of the battle. Captured, he was shocked by the spectacle of redcoat ‘hurried into eternity'' by accidentally sparking a storehouse of gunpowder. ‘I saw the print of a man who had been dashed against the end of a brick church thirty feet above the ground.’

Since orderlies were paroled along with their officers, Sherburne got back to Portsmouth within a few months. He found his family in shambles. His father and older brother had been lost at sea aboard trade ships. His mother, now that ‘the avails of my former cruise were pretty much exhausted,’ was working as a seamstress to support her two daughters and youngest son.

‘Almost sixteen and pretty well grown,’ Sherburne gave in to a recruiter's persuasion to ‘take a short cruise in a fine schooner and make your fortune. ‘He joined the ‘jovial company’ of the privateer Greyhound. ‘She had a full complement of officers two or three ordinary seamen before the mast, and between twenty and thirty boys, some of them not a dozen years old.’

Dispatched with a small crew to sail Greyhound's first prize back to port, Sherburne soon detected that his prizemaster was ‘completely deranged,’ tending to bark out orders to imaginary subordinates and then replying ‘as though they answered him.’ The man had deserted from the Royal Navy and was consumed with dread of recapture. His anxiety drove him to fold his clothes neatly on deck one night and jump naked over the side never to be seen again.

Run down and boarded by British privateers whose threats to execute them were defused at the last moment by their captain, ‘who appeared more rational,’ Sherburne and the rest of the prize crew were incarcerated in a Canadian village previously ‘visited’ by American raiders who'd plundered its stores and terrorized its citizens, an affront that disposed Sherburne's jailors to starve him to death in retribution. Fortunately a Royal Navy ship, Duchess of Cumberland came to take the prisoners to Newfoundland for exchange.

On the way, a gale whipped up and drove the vessel onto the rocks. ‘Her decks began to open.’ A column of seawater ‘eight or ten inches in diameter’ gushed into the hold. The ship pitched so violently its officers started ‘raving and swearing, crying and praying.’ The helmsman was thrown overboard and crushed between the hull and the rocks ‘as quick as you could crush an egg shell in your hand.’

Two sailors swam to shore clinging to a wooden spar to which a rope was tied. After the rope was looped around a boulder, Sherburne was the fifteenth man to pull himself along it through the raging surf; ten had made it alive so far. The survivors from among the ship's company then trudged to the nearest port, where the Americans were remanded to a British transport bound for Plymouth, England.

There, a court of ‘elderly judges, and all wore large white wigs,’ sentenced Sherburne to Mill Prison ‘for rebellion, piracy, and high treason on His Majesty's high seas.’ When released in the spring of 1781 malnutrition had taken its toll. ‘I walked poorly even with two canes.’

Disembarking in Salem, he learned that Greyhound had taken a valuable prize and its original crewmembers were entitled to ‘sixty-three pounds sterling each.’ But having left his mother power of attorney in his absence, he found that she'd drawn his money and spent it.

Still lame and gaunt from his captivity, he signed on to Scorpion, a transport carrying eight small guns and a letter of marque permitting it to take prizes during its trade run to the West Indies. He would have preferred to remain on land and convalesce, ‘but this business would not do to live by.’

Eighteen months later he would return to Portsmouth after trekking overland from Rhode Island. Meeting him at the outskirts of town, his younger brother almost fainted at the sight of ‘my bones projecting’ beneath the skin. Sherburne staggered the rest of the way home on his brother's arm and collapsed into bed, where he remained for twenty days. ‘I was very unwell,’ he wrote.