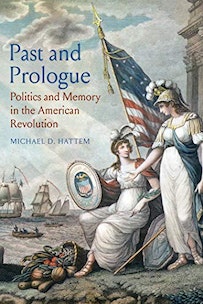 Past and Prologue: Politics and Memory in the American Revolution by Michael Hattem

Were Revolutionaries thankful for the opportunity to learn from history, or were they doomed to repeat it? What did they read to influence their thinking and education as they became American citizens? In Past and Prologue: Politics and Memory in the American Revolution, Michael Hattem argues that the Revolutionary War made the past matter more to Americans than ever before. Hattem describes how British colonists accessed information and found inspiration in “history culture,” citing references to the past from the popular published ecclesiastical and civil history books, but also in almanacs, pamphlets, sermons, children’s literature, historical fiction, poetry, art, and even private letters.

Although they might have memorized facts to impress friends before Jeopardy! or Trivial Pursuit ever existed, people found many purposes in studying the past and developed emotional attachments to specific events they found worth remembering for future generations. For the Old Colony Club in Plymouth, Massachusetts, this included celebrating the year 1620. Read an excerpt from Chapter 2 to learn how they commemorated the Pilgrims’ arrival — a social tradition that later became Thanksgiving as we know it today.

We can begin to get a sense of the intimacy of the relationship between the past and present in the way colonists used the term “history.” In his Dictionary of the English Language (1755), Samuel Johnson defined it as “1. A narration of events and facts delivered with dignity; 2. Narration; relation; 3. The knowledge of facts and events.” While the first relates most obviously to the work of historians and the third relates to history as a specific field of study, the second definition is much broader and more colloquial. Unlike in our contemporary culture, where we debate whether we are too close in time to an event to produce a history of it, the truncation of historical distance meant that last week was, in some sense, just as “historical” as the previous century. People in the eighteenth century did not just read histories; they lived them. In accordance with Johnson’s second definition, they also told their own “histories” in conversation. As John Adams recalled upon visiting Mrs. Palmers, a very talkative neighbor, who “gave us history’s of her Journeys with her Brother, to Connecticutt, to Barnstable, Plymouth, Middleborough, Norton, &c.” She also recounted the “History of her Loves” which was “curious, but not uncommon.” People also spoke of “the History of [their] illness,” and to gossip about someone was to “whisper the[ir] Secret History.”

This rhetorical mixture of the quotidian events of one’s daily life with the grand political and religious events of the past is evident in the uses of the term throughout the pre-revolutionary period. For example, on a broader scale, the Annual Register, published yearly in London as a compilation of the notable events of the previous year, was subtitled, “Or a complete View of History, Politics and Literature” for the given year. Similarly, one of the first colonial periodicals was entitled the American Magazine and Historical Chronicle (1743–46). The section entitled the “Historical Chronicle,” like the Annual Register, predictably aggregated a list of the most recent political and military events in Europe. Whether it was speaking or writing about a battle between national armies or the vagaries of an individual’s love life, the term “history” was used widely and included both the distant and most recent past, the civic and the personal. Such usage speaks to both the truncation of historical distance and the intimate sense of the relationship between the past and present in eighteenth-century British America.

Chapter Two- The Colonial Past in the Imperial Crisis

On January 13, 1769, seven young men from the town of Plymouth came together to form the “Old Colony Club,” to commemorate the colony’s origins and avoid the “inconveniencies that arise from intermixing with the company at the taverns.” After meeting throughout the year, they voted that December 2 would be “kept by this club in commemoration of the first landing of our worthy ancestors in this place.” These festivities to celebrate the arrival of the Pilgrims drew out the entire town. The day started with the discharging of a cannon and the “hoist[ing] upon the Hall an elegant silk flag with the following inscription, ‘Old Colony 1620.’” In the afternoon, they invited the town elders to a dinner at which the attendees and the food were “dressed in the plainest manner (all appearances of luxury and extravagance being avoided, in imitation of our worthy ancestors whose memory we shall ever respect).” After dinner, the members led a procession through the town to their Old Colony Hall led by the club steward, who carried “a folio volume of the laws of the Old Colony.” There, “a number of descendants from the first settlers in the Old Colony drew up in a regular file and discharged a volley of small arms, succeeded by three cheers.” Out of “respect for the memory of their ancestors,” students of the local grammar school joined the crowd and sang “a song very applicable to the day.”

In the evening, the members and invitees gathered in the club’s Hall to deliver twelve toasts. Sitting in the chair previously owned by William Bradford, the club president Isaac Lothrop offered the first toast: “To the memory of our brave and pious ancestors the first ancestors the first settlers of the Old Colony.” They spent the rest of the evening “recapitulating and conversing upon the many and various adventures of our forefathers in the first settlement of this country.” The club continued to celebrate this new holiday—known as both “old Colony Day” and, later, “Forefathers’ Day”—until 1773, when its twelve members split between loyalists and patriots. Residents of Plymouth resurrected both the club and the holiday in 1820. Forefathers’ Day, through its commemoration of the Pilgrims, its use of symbolic dress and food, and its commemoration of Native American assistance to the settlers, served as a template for Thanksgiving, which became a federal holiday during the Civil War. The establishment of both the club and the holiday in 1769 speaks to the growing sense of connection both felt and sought by colonists during the imperial crisis with the original settlers, the act of settlement, and the colonial past more generally. Indeed, how colonists—both patriots and loyalists—thought about and used the colonial past in the political rhetoric of the imperial crisis helped shape the dynamics of the imperial debate and, thereby, of the coming of the American Revolution.

In engaging with the most crucial questions of the imperial debate, colonists repeatedly based their arguments on the past in a variety of ways. They created and employed historical memories of both the British and colonial pasts designed to reconcile the present with the past and begin fostering a collective sense among the inhabitants of Britain’s North American varied colonies. Colonists also appealed constantly to the historical past itself as a source of authority. They used it in every type and form of resistance rhetoric throughout the entire imperial crisis, from newspaper essays and pamphlets to sermons, orations, and songs, from the resolves of farmers and artisans in town meetings to the official resolutions of lawyers in congress, from New England to Georgia, from 1764 to 1776.

By the close of the seventeenth century, however, the colonies had been racked by a series of tumultuous events, such as King Philip’s War, Bacon’s Rebellion, the Dominion of New England, Leisler’s Rebellion, and the Salem witch hunts. Clamoring for a sense of stability, colonists increasingly fashioned their political institutions, social hierarchy, economy, and culture after the successful and stable model of post-1688 Britain. From the patronage of royal governors to the creation of an elite American ruling class, from the increasing importance of the colonies in the imperial economy to the consumer revolution that brought British goods to an ever-growing number of colonists with the disposable income to buy them, by mid-century colonists had never been more culturally British. Therefore, when Parliament usurped the authority of the past with unprecedented legislation in the 1760s and 1770s, it created a cultural as well as political crisis as colonists repeatedly sought to reconcile their understandings of the past with their new unprecedented present and unpredictable future.

The creation of a new historical memory of the colonial past served two primary functions during the imperial crisis. First, it fostered a sense of a shared past among many colonists throughout British America where they had only heretofore shared the British past in common. In so doing, it contributed to the development of colonial unity and a burgeoning sense of being part of a shared community, which was crucial to the success of resistance and, ultimately, the move toward independence. Second, it provided an effective origins myth for this emerging community of a people who were not yet a nation. This new historical memory of a shared colonial past reflected the interrelationship between history culture and the politics of the period. The colonies had developed to a place of stature within the economy of the British Empire. Yet, to preserve that place, especially in the face of such unprecedented actions by Parliament, would require a return to first principles. Those first principles, for many British American colonists, were increasingly found not just in the British constitution but in the origins of the colonies themselves.