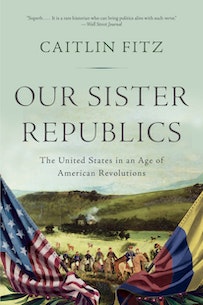 Our Sister Republics: The United States in an Age of American Revolutions by Caitlin Fitz

Our Sister Republics does not strictly deal with high-level diplomacy, battles, and leaders. Instead, Fitz focuses on the common people of the United States. Newspapers published across the United States serve as key primary sources for this book to reveal the voices of the people. Fitz devotes significant attention to the ways race and racial politics influenced how people in the United States, black and white, reacted differently to the South American revolutions.

The following excerpt comes from the beginning of Chapter Two, "Agents of Revolution," which introduces us to South Americans who visited the United States to inspire support and gather supplies for their revolutions back home. Fitz recently joined the Museum for a live virtual conversation on Our Sister Republics.

They brought their revolutions to the United States. Poets and politicians, outcasts and emissaries, sergeants and servants and secretaries, they left their war-torn homes and pursued political support as well as personal security in the sprawling northern republic. Speaking Spanish and Portuguese, French and indigenous Aymara, they were descendants of Africans, Europeans, and native people. They hailed from the skyscraping peaks of the Andes to the grassy lowlands of the River Plate, from sunbaked and rain-washed sugar plantations to mines studded with silver and glistening with gold. Vowing support for different sovereigns, they came variously as refugees and exiles, diplomats and merchants, republicans and occasionally royalists. Most of all, they carried tales of their travails, working to transform their host cities into international hubs of the American independence wars.

The South Americans who came to the United States in the 1810s and 1820s were a small and disparate bunch. Numbering at best in the low hundreds, they were no match for the tens of thousands of rebels and refugees who had arrived from France and Haiti beginning in the 1790s. But South Americans mattered beyond their numbers for one simple reason: they told their stories, and to an eager and inviting audience. Then, they convinced editors and writers to replicate those stories for curious readers the nation over, framing and fueling the tales that U.S. onlookers were beginning to tell themselves about the wave of revolutions that churned the southern part of the globe.

Rebels’ emphasis on storytelling was not simply a way to allay homesickness or entertain listeners. It was, in many cases, part of a coordinated diplomatic strategy, predicated on a belief that U.S. foreign policy emerged in the messy world of democratic politics rather than in isolated chambers of Washington. By swaying the people through the press, agents hoped for nothing less than to sway the government itself. These tactics turned out to be only partly effective in shaping federal policy, but they inspired U.S. audiences along the way, reinforcing popular notions of republican mission and national greatness. If U.S. audiences narcissistically believed that the United States was responsible for everything good that seemed to happen elsewhere in the Americas, rebel agents—hoping that flattery would inspire support—encouraged the egotism. While U.S. observers displayed arrogance, insurgent leaders displayed agency, working hard to control their image in the United States and persuading their hosts that the latest American revolutions were a glorious tropical reprise of 1776.

South Americans who came to the United States left exceedingly sparse documentary records—as well as exceedingly scattered ones whose fragments remain strewn across countries and continents. From such things as names scrawled on the back of envelopes, correspondence of rebel juntas, confidential letters that referred to people by false aliases, and gossip overheard by the Spanish and Portuguese ministers, historians must struggle to reconstruct even the most fundamental events of expatriates’ lives. Eventually, from that haphazard composite of sources, broad outlines emerged…"

Manuel Torres was one of the more visible expatriates, and one of the biggest thorns in the side of the Spanish minister. Exiled from what is now Colombia after conspiring against the Crown in the 1790s, the Spanish-born renegade fled to a home on Philadelphia’s red-bricked and cobblestoned Spruce Street, a few blocks southeast of the mansion where Presidents George Washington and John Adams lived amid the sounds and smells of late-eighteenth-century urban life: clattering carts, clopping horses, putrefying urine, and smashed manure. Nephew of a powerful archbishop and viceroy, Torres lived the high life until enterprising locals conned him out of over $100,000 in fortune. Instead of getting downhearted, Torres got to work. He translated, he taught, and, when the first sustained waves of rebellion swept over Spanish America in the early 1810s, he made a home from the hubbub, throwing his doors open to an unending stream of revolutionary visitors. His hallways echoed with boisterous Spanish, as agitators from throughout the Americas socialized, plotted, and huddled around newspapers, anxiously scanning the headlines for news from home and debating what it all meant for the cause of human freedom.

Such men gained strength by sticking together, strangers-turned-friends owing to sheer revolutionary necessity. Torres was an expert at hastening the conversion, a genteel, middle-aged revolutionary doing exactly the kind of thing that had gotten him evicted from South America in the first place. As early as 1811, Torres was connecting agents from Venezuela to new arrivals from Buenos Aires, men who knew next to nothing about each other’s home provinces and yet quickly agreed to pool their meager financial resources in an effort to supply both regions with weapons, gunpowder, and credit. It was typical Torres: generous in making introductions, he convinced near-strangers to bind together their fates, their reputations, and their pocketbooks, persuading them to cover for each other if either party defaulted on a loan. As one agent put it, Torres ‘deserves and enjoys the confidence of everyone.’

Between 1810 and 1826, as their independence wars flared, over two hundred of these South American visitors descended on the United States, many of them passing in and out of Torres’s ever-welcoming parlor. Their ships—salty, windy, lurching with the waves—dropped anchor in places like Baltimore and New York as sailors heaved on ropes and passengers lined the decks to breathe what one optimistic Colombian called ‘air of liberty!’ Most came from Colombia, Venezuela, and rebellion-prone parts of Brazil, but several dozen arrived from the Río de la Plata, and a few hardy souls made their way across the Andes or via the Pacific, sailing in from Chile, Peru, and Ecuador. Himself a magnet for revolutionary visitors, Torres, who lived in Philadelphia and its environs for over a quarter century, was relatively sedentary. Most expatriates lived itinerant lives even after they arrived in the busy northern republic, hopping restlessly amid the constellation of port cities that illuminated the East Coast: Washington and Baltimore, New York and the City of Brotherly Love itself. In the process, they spun a sprawling, underground web of agitators, one in which Torres’s house and other like-minded gathering places—dockyards, freethinking taverns, sympathetic printing shops—became pulsing centers of revolution. (Still more visitors, disproportionately from nearby Mexico and the Caribbean, congregated along the Gulf Coast, developing an overlapping but distinct web of contracts and focusing more consistently on privateering and territorial raids.)