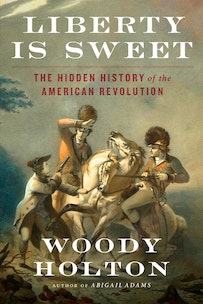 Liberty is Sweet: The Hidden History of the American Revolution by Woody Holton

Purchase the book from Simon and Schuster.

What did liberty mean for the everyday people who first heard the Declaration of Independence read aloud? How did one’s interpretation of the Declaration shape their participation in the American Revolution?

In Liberty is Sweet: The Hidden History of the American Revolution, historian Woody Holton creates a single narrative of the Revolutionary War that intertwines social history with discussions of key military moments. Holton offers new insights from more than 1,000 primary accounts, written by people whose desire for freedom often brought them into conflict with their governments. Referencing a letter commenting on Lord Dunmore’s 1775 proclamation from General George Washington’s distant cousin, Lund Washington, Holton presents a world of diverse people who agreed with the sentiment, “Liberty is sweet.”

Earlier in 1775, free African American Lemuel Haynes had left his home in Granville, Massachusetts, to join the Continental Army around Boston. Forty years after the war, as a veteran and ordained minister, he remembered that he had given his all “for the sake of freedom and independence” but “never viewed the sacrifice too great.” In July 1776, he was one of the first people to quote the Declaration in his essay,“Liberty Further Extended” — one of the world’s first anti-slavery pamphlets.

Read an excerpt from Chapter 19: Liberty Further Extended about how the words of the Declaration of Independence inspired its writers, its first readers, and the symbolic meaning of what would become known as the Liberty Bell.

Explore the spread of support for American independence from January to July of 1776. Encounter the perspectives of real people, like Lemuel Haynes, on all sides of the debate. Explore Online

The next day, John Adams wrote Abigail advocating as well as predicting that “The Second Day of July 1776, will be the most memorable Epocha, in the History of America” and “ought to be solemnized with Pomp and Parade, with Shews, Games, Sports, Guns, Bells, Bonfires and Illuminations from one End of this Continent to the other from this Time forward forever more.”

He was close. Starting with the first anniversary in 1777, the United States chose not to commemorate the second of July, when Congress voted to sever ties with Britain, but the fourth. The reason was clear: most Americans learned about independence from the Declaration, which was dated July 4. Even today, in a powerful reminder of the mythology that clouds every nation’s origins, Americans celebrate the press release rather than the act itself.

We do not know whether Thomas Jefferson, who hated speaking in public, personally read his Declaration to the assembled delegates or palmed that task off onto a clerk, but either way, Jefferson literally orchestrated the event. Following a system developed by music and poetry critics, he used symbols resembling quotation marks to indicate where the reader should pause for emphasis: one stroke for a short pause, two for a longer one, and three for the longest.

This first oral performance of the Declaration set up three days of intense debate eventuating in major changes—primarily erasures. The delegates reduced Jefferson’s 168-word discussion of the slave trade and the Anglo-Black alliance to a seven-word euphemism: “he has excited domestic insurrections amongst us.” Nor were African Americans the only group Congress caused to disappear. A member of the Chesapeake gentry, which had long clashed with interloping storekeepers from Scotland, Jefferson denounced George III for fighting his American colonists using “Scotch” mercenaries. Congress excised that slur, along with Jefferson’s denunciation of Loyalists, which admitted too much—namely, Jefferson, rough draft of the Declaration of Independence showing diacritical marks (‘ and “) to denote pauses that thousands of free Americans opposed independence. Jefferson’s fellow delegates also toned down his melodramatic farewell to the British people; adieu to “Adieu!” Altogether they deleted about a fourth of his verbiage.

Congress also made the declaration more religious. Both versions assert that all men are created equal, but Jefferson’s colleagues scratched out his claim that “from that equal creation they derive rights inherent & inalienable” and insisted instead that humans’ rights are “endowed by their Creator.” In the final paragraph, Congress inserted an appeal “to the Supreme Judge of the world” and an affirmation of its “firm reliance on the protection of divine Providence.”

Congress in addition took the Declaration further in a direction that Jefferson had already moved. The Virginian had twice mentioned Parliament, by name, but no form of that word appears in the final draft—even though everyone understood that the policies animating the rebellion came from Parliament rather than from George III. Congress’s studied omission of “Parliament” reflected a larger difference between the first and final versions of the Declaration. The drafting committee replaced Jefferson’s term for George III, “his present majesty,” with “the present king of Great Britain”—the sort of phrase a foreigner might use. By announcing free Americans’ determination “to advance from that subordination in which they have hitherto remained,” Jefferson had acknowledged their previous subjugation. Instead the committee stated that the colonists had chosen “to dissolve the political bands which have connected them” to Britain, implying that even before independence, the two societies had been nothing more than allies. In short, Congress out-Jeffersoned Jefferson, giving Britain and America not only separate destinies but separate pasts.

As Julian P. Boyd, founding editor of the definitive edition of Jefferson’s papers, wrote in 1945, the Declaration of Independence “bore no necessary antagonism to the idea of kingship in general”—only to George III. Congress devoted the largest section of the document to enumerating the king’s crimes, and Loyalists and British officials affirmed their centrality by criticizing this section of the Declaration more than any other. Both sides focused on the grievances because nearly everyone agreed in principle that societies have the right to overthrow governments that become oppressive, the sole question being whether Britain had met that standard. Even Congress’s invocation of humans’ equal entitlement to “Life, Liberty and the pursuit of Happiness” served primarily to introduce their concomitant right of revolution. And even that bold affirmation merely set up the delegates’ insistence upon the analogous right of any society in alliance with another to break it off—in this case, for thirteen elements of the British empire to sever ties with the rest—which in turn led to the heart of the Declaration, Congress’s twenty-six grievances. Several Britons and pro-British Americans responded to the Declaration of Independence, and all shared its authors’ focus on the specific grievances and the right of secession.

But phrases that had seemed unimportant to Congress or its critics caught the attention of other Americans, especially those who hated slavery. Before the year 1776 was out, Lemuel Haynes, a free Black soldier in the Continental Army, had drafted an essay called “Liberty Further Extended.” He opened it by quoting from the Declaration of Independence’s offhand assertions “that all men are created equal” and “that they are endowed by their Creator with certain unalienable Rights.” By highlighting these claims, Haynes began the process of shifting the meaning of the Declaration of Independence, from Congress’s ordinance of secession into a universal declaration of human rights. This movement would be carried forward by other abolitionists, then later by women’s rights advocates and eventually by freedom lovers all over the world.

The same American abolitionists who first glimpsed the modern meaning of the Declaration were also the ones who immortalized the bell that may have been rung to announce the first public reading of the Declaration of Independence on the steps of the Pennsylvania statehouse on July 8. At the time no one gave the statehouse bell much thought. But years earlier, it had been engraved with a passage from Leviticus—“Proclaim liberty throughout the land”—and starting in 1835 Black and white abolitionists pointed out that slavery dishonored both the bell’s inscription and its reputed role in heralding the Declaration. They adopted it as their symbol, and it became known as the Liberty Bell.

Most other American cities and Lemuel Haynes’ town welcomed the Declaration as warmly as Philadelphia had. In New York, after Washington had it read publicly to the Continental Army, Whigs and their slaves tore down the city’s equestrian statue of George III and beheaded it. The statue was made of lead covered with gold leaf, and the townswomen of Litchfield, Connecticut, melted it down into forty thousand musket balls. On July 18, 1776, the entire town of Boston was under inoculation for smallpox; anyone who had never been infected and wished to remain that way was warned to stay inside or out of town. But the mass immunization did not stop Col. Thomas Crafts from reading the Declaration of Independence from the Town House balcony to a concourse of soldiers and civilians, including Abigail Adams. “As soon as he ended,” she wrote, “the cry from the Belcona, was God Save our American States and then 3 cheers which rended the air, the Bells rang, the privateers fired, the forts and Batteries, the cannon were discharged, the platoons followed and every face appeard joyfull.” 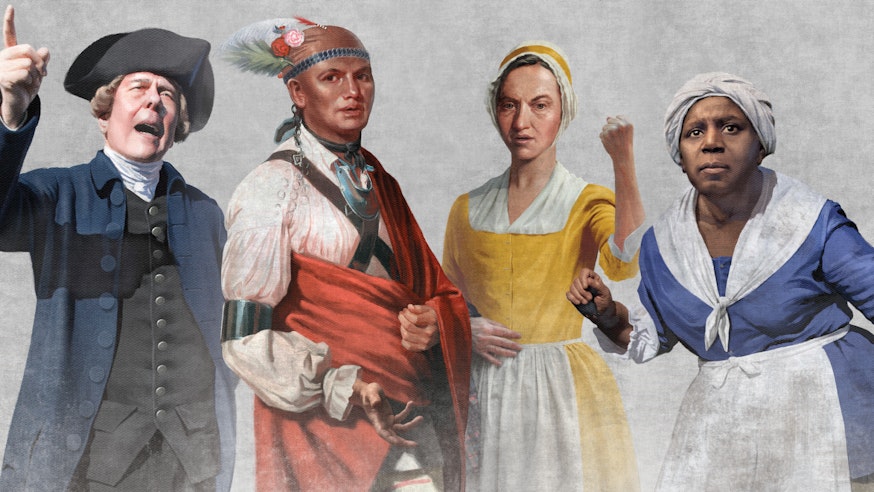 Explore the spread of support for American independence from January to July of 1776. Encounter the perspectives of real men and women on all sides of the debate.
Read More 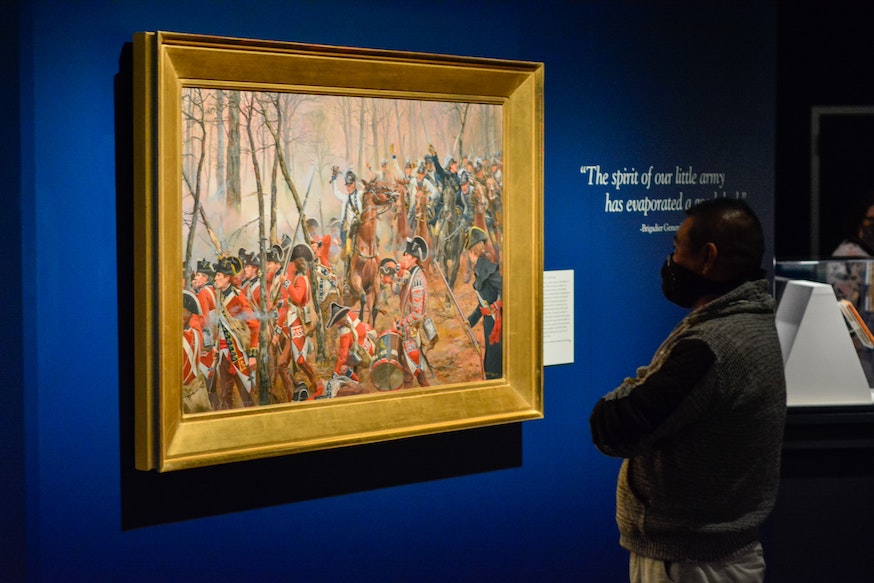 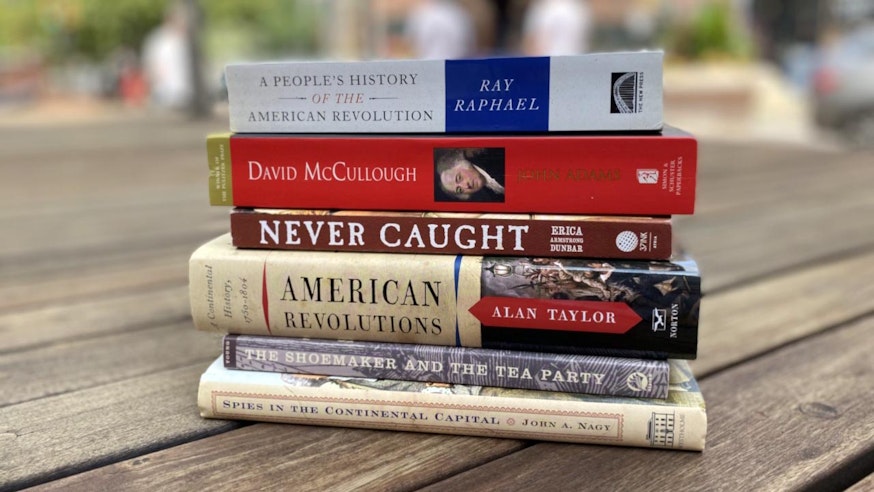