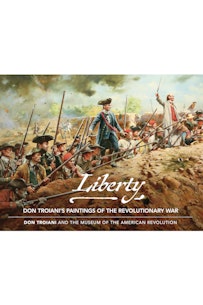 Liberty: Don Troiani's Paintings of the Revolutionary War by Don Troiani and the Museum of the American Revolution

Widely considered America’s foremost historical military artist, Don Troiani has spent much of his career painting scenes and soldiers from the Revolutionary War. Through meticulous research and a mastery of technical skill and artistic drama, Troiani’s paintings plunge the viewer into some of the most pivotal events in America’s fight for independence. This week’s Read the Revolution featured book accompanies the first-ever exhibit of his original paintings of the Revolutionary War, Liberty: Don Troiani’s Paintings of the Revolutionary War, authored by Troiani in collaboration with the Museum of the American Revolution. The richly illustrated book includes the paintings and artifacts in the exhibit, and features essays written by 11 noted historians.

"The Battle of Kings Mountain, October 7, 1780," painted by Troiani in 2006, shows Revolutionary militiamen from the Blue Ridge Mountains of the Carolinas, Virginia, and Georgia dealing the final blow to a force of Loyalists led by Major Patrick Ferguson of the British Army. Ferguson, in the light blue hunting shirt at the center of the painting below, falls dead from his horse, hit by at least seven lead balls. The paintings in the exhibit, which opens Saturday, Oct. 16 at the Museum, capture moments from most of the major campaigns of the eight-year-long war, including the war in the South from 1779 to 1781. 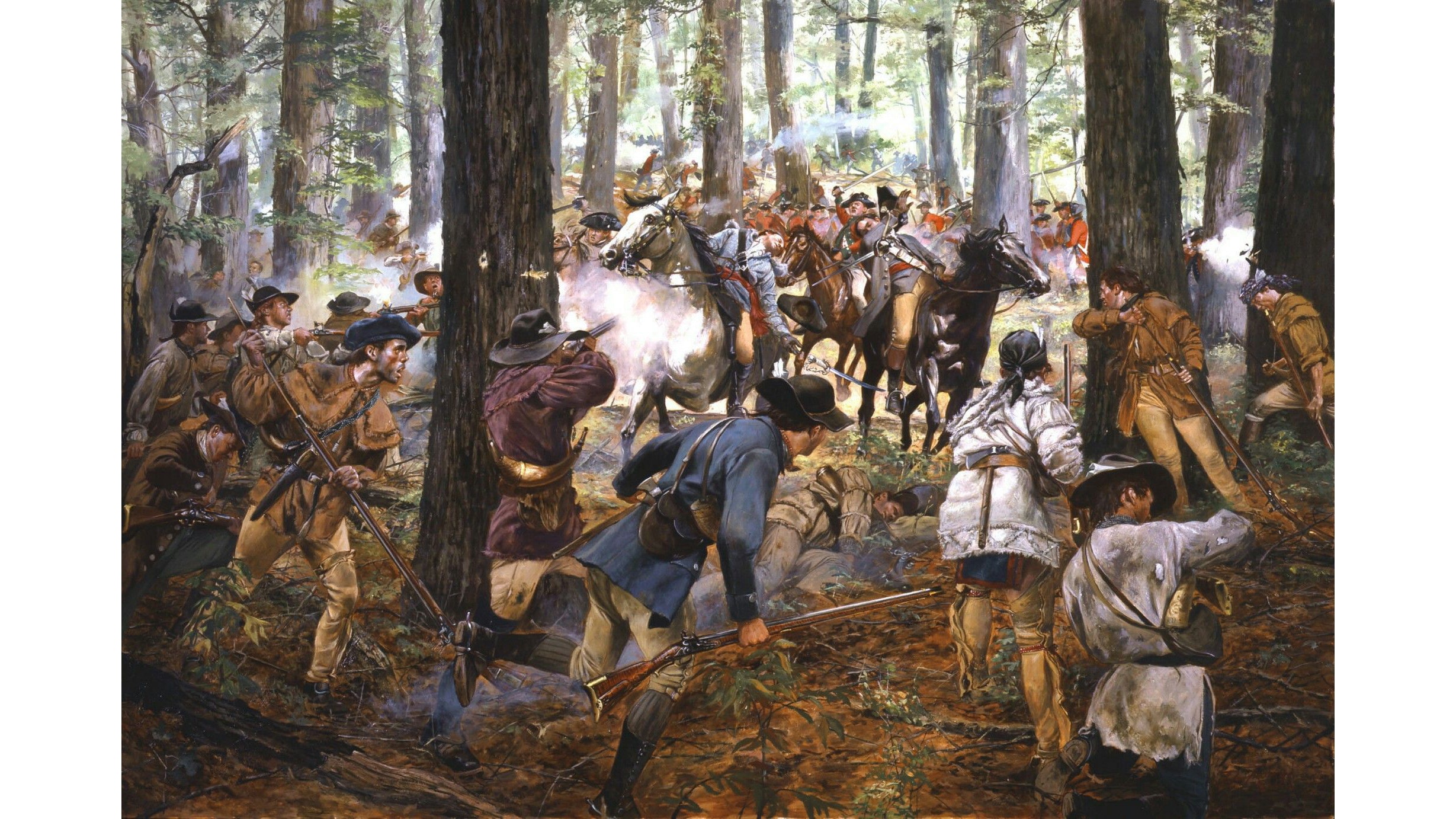 Read an excerpt about this significant victory for American Revolutionaries by historian and collector James L. Kochan, with additional insights from Troiani himself.

Liberty: Don Troiani’s Paintings of the Revolutionary War immersed visitors in the dramatic and research-based works of nationally renowned historical artist Don Troiani to bring the compelling stories about the diverse people and complex events of the American Revolution to life. See Content

By mid-1780, the situation of the Revolutionary cause in the Carolinas appeared quite bleak. Charleston had fallen to the British in May, resulting in the incarceration of more than five thousand Continental troops. Steps were now taken to crush all remaining rebel opposition in the Southern backcountry. Fast-moving British and Loyalist light corps were sent out on seek-and-destroy missions against the Continental, state, and militia forces that had heretofore eluded capture. The Revolutionary forces were scattered and in disarray, while the British standard was raised among the Loyalist sympathizers in that region. Major Patrick Ferguson, commander of the American Volunteers, was appointed the Inspector of Militia and ordered to “form into Corps all the young and unmarried Men of the Provinces of Georgia and the two Carolina’s” into battalions or independent companies, as “Circumstances will admit.” By midsummer, Ferguson had already succeeded in organizing, training, and partially arming and equipping a number of battalions in South Carolina. Having routed a second Southern Army in August at the Battle of Camden and secured most of the major settlements in the South Carolina Piedmont, British Lieutenant-General Charles Cornwallis contemplated an invasion of North Carolina. While the main army advanced north under his command toward Charlotte, Ferguson would lead a smaller, flanking force farther to the west, crushing all opposition from that quarter, a known hotbed of Revolutionary activity.

The backbone of Ferguson’s column consisted of his American Volunteers, a detachment of picked men drawn from various Loyalist regiments from the north. Although they wore the different regimental coats of their parent corps, mostly red with blue or green facings and some in green coats, Ferguson did his best to instill a sense of group identity for the new corps by at least enforcing uniformity in the form of their cocked hats and in the method of wearing their hair. He had also succeeded in procuring short, British-made, muzzleloading military rifles for half of his rangers, the others being armed with muskets and bayonets. He trained his men to fight in a loose, two-rank formation with the riflemen posted in the rear rank, protected by the bayonets of the musket men to their front, responding to his various commands by sound of whistle and waving of the hat. Ferguson himself carried the breech-loading rifle of his own invention that bore his name, as did a few of his other officers, in addition to swords. Most of Ferguson’s command, however, consisted of Loyalist militia—mostly men from the Ninety-Six District of South Carolina, trained (to some degree) by Ferguson to fight in a similar manner to his American Volunteers. They were armed with a mix of their own guns, mostly long rifles or fowling pieces, along with captured French muskets and bayonets. Needing a dependable cavalry force, Ferguson created a small cadre of rifle dragoons or mounted infantry from the American Volunteers and issued cutlasses to them and some of the mounted militia for fighting while on horseback.

With approximately one hundred of the American Volunteers and nearly one thousand militia, Ferguson marched toward the North Carolina border and issued a warning that threatened “fire and sword” to those who resisted British rule. Various over-mountain leaders determined to gather a force together capable of eradicating Ferguson and his Loyalists once and for all. A rendezvous was set for September 25 at Sycamore Shoals, at which more than one thousand Revolutionary militia and volunteers from both sides of the Blue Ridge—Carolinians, Virginians, and Georgians—showed up. Setting out the next day, they were joined by additional militia from the Carolinas over the course of more than a week’s march, swelling their numbers to more than eighteen hundred men, mostly mounted riflemen. Learning of their advance, Ferguson began a slow retreat, after dispatching couriers to Cornwallis in which he brashly stated that reinforcements of “three or four hundred good soldiers, part dragoons, would finish this business.” On October 6, Ferguson took post on the summit of Kings Mountain and awaited such troops, as well as the return of a two hundred-man scouting party that he had sent out that morning. Kings Mountain was a footprint-shaped ridge whose crest dominated the adjoining hills by no more than some sixty feet. Nearly treeless at the top, it had rocky slopes heavily wooded with old-growth hardwoods, an element that would contribute in no small part to his undoing.

That evening, the Revolutionaries divided their force, sending a fast-moving column of some nine hundred of the “best horsemen” ahead to close on their intended prey before it eluded them, “the weak horse and footmen to follow as fast as possible.” Riding all night in a heavy rain that dissipated to a drizzle by the following morning, the fast column linked up with other militia forces within seven miles of Kings Mountain at about day. Ferguson’s position was confirmed by locals and a strategy was devised on how to mount the attack. Advancing by two columns to the right and left, respectively, the riflemen encircled the perimeter of the mountain. By mid-afternoon, the weather had cleared and most of the regiments had reached their assigned positions before they were detected and an alarm sounded.

After overrunning the Loyalist guard posts downslope, “they were able to advance in three divisions . . . to the crest of the hill in perfect safety until they took post and opened an irregular but destructive fire from behind trees and other cover.” Ferguson attempted to counter this by having the American Volunteers push them back by point of bayonet, the “mountaineers flying whenever there was danger of being charged by the bayonet, and returning again so soon as the . . . detachment faced about to repel another of their parties,” according to Alexander Chesney, a Loyalist militia captain. For nearly an hour, the battle raged in this seesaw fashion. Finally, the North Carolina Loyalist militia, after repulsing two attacks, ran out of ammunition and broke, throwing the rest of the militia into confusion, who began to crowd the flanks of the regulars. Ferguson, realizing that the situation was desperate, called for another bayonet charge before rebel riflemen overran their position.

Shown at the center of this painting, Ferguson led a forlorn hope down the hill consisting of a handful of mounted men—two militia officers and the few dragoons of the American Volunteers yet alive—hoping to cut a swath through the advancing riflemen. Although he was dressed in a light-colored hunting shirt, locals had forewarned the attacking riflemen to be on the lookout for an officer dressed in this manner and wielding a sword in his left hand (his right incapacitated by an earlier war wound). Ferguson fell at Kings Mountain with at least seven lead balls in his body. With his death, further Loyalist resistance crumbled in the region. This crushing defeat of the Loyalists signaled the beginning of the end for British ascendancy in the Carolina backcountry.

Jim Kochan was kind enough to shoot the background pictures at the location on a date close to the battle anniversary and at the correct time of day. Due to a shortage of cavalry sabers, some of Ferguson’s mounted contingent were equipped with British naval cutlasses.