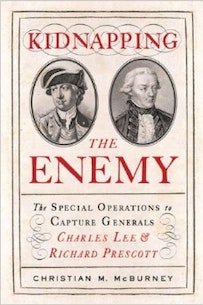 In late June, Barton formally presented his plan for Prescott's capture to his superior, Colonel Joseph Stanton. Stanton's 1st Rhode Island State Regiment, in which Barton served as lieutenant colonel, was then stationed in Tivertown, near Howland's Ferry. Stanton issued Barton written orders to support his project, but did not refer specifically to Prescott as a target, so as to keep it secret, even from Stanton's own aides. 'You will proceed to the Island of Newport [Aquidneck Island], and attack the enemy when and where you think proper,' Stanton wrote. 'Make report to me of your proceedings.' Rhode Island governor Nicholas Cooke was also informed of the plan. It does not appear that the commander of American forces in the Rhode Island theater of war, Major General Joseph Spencer of the Continental Army, was informed. This was to be a strictly Rhode Island state affair.

Barton wasted no time. He asked five regimental officers to volunteer for a secret and dangerous mission, the details of which he did not disclose. According to Barton's later account of the mission, Captain Samuel Phillips (who had been behind the April capture of Ensign John M. Clarke on Aquidneck Island), Lieutenant James Potter, Lieutenant Joshua Babcock, and Ensigns Andrew Stanton and John Wielcocks 'all considered to go.' Barton's subordinates located file whaleboats, and in a few days 'had them fitted in the best possible manner.' For this type of mission, whaleboats were ideal: they rode low in the water, did not rely on fickle winds, and required no additional manpower, as Rhode Island's regiments were filled with men with rowing experience.

Out of concern for secrecy, Barton delayed asking for rank-and-file volunteers. Then, in early July, he personally appealed to the 1st Rhode Island Regiment. 'Brother soldiers,' he boomed, 'I am about to undertake an enterprise against the enemy. I wish to have about forty volunteers and those who dare risk their lives with me on this occasion will advance two paces to the front.' At this, Barton later reported, the 'whole regiment' stepped forward. Barton expressed his gratitude, and then went through the ranks picking out experienced rowers. He also selected four former Aquidneck Island residents to serve as guides. They included Samuel Cory, a veteran of the battles of White Plains and Princeton who before the war had resided near the Overing house. Most of Barton's new force came from his regiment. But word of the mission leaked, producing four more volunteers from Colonel Robert Elliot's Rhode Island State Artillery Regiment and three from Colonel Archibald Crary's 2nd Rhode Island State Regiment...

At least two volunteers were persons of color. Jack Sisson, a former slave from South Kingstown, participated as a boat steerer. Daniel Page, a Native American from either the Narragansett tribe of Rhode Island or the Pocasset band of the Wampanoag tribe of Massachusetts (it is not clear which), would steer Barton's own whaleboat. A third man, connected to Barton, also apparently played an important role. It is not clear if this man was Sisson, a twenty-two-year-old slave from South Kingstown named Guy Watson, or a slave or servant named Prince Goodwin from Plymouth, Massachusetts.

Barton and his men spent much of July 4, 1777, in Tiverton, preparing for their raid and enjoying the boom of cannon fired in celebration rather than anger... That evening, Barton's raiding party — with eight men, one officer, and provisions in each of the five whaleboats — departed Howland's Ferry for the port of Bristol... At 1:00 a.m. Barton's boat reached Bristol, where he waited for the others to arrive...

By 8:00 a.m. on July 5, the rest of Barton's boats had arrived safely at Bristol. That evening, Barton took his officers to nearby Hog Island, where for the first time he informed them of his plans and the intelligence he had acquired. Although 'surprised,' he wrote, the officers 'readily consented to what I had proposed' and further agreed to 'the most solemn charge not to communicate to anyone the least hint of our enterprise.' From Hog Island they eyed the British ships anchored in the middle channel, and the British troop positions on the opposite shores. They could not see the beach on which they hoped to land.

After returning from Hog Island, Barton decided not to launch his raid from Bristol, despite its close proximity to Middletown and the Overing house. Instead, he chose a longer but safer route from Warwick Neck, located west of Prudence Island... On the night of July 6, Barton's boats slid the roughly five miles across Narragansett Bay to Warwick Neck... Barton's raiding party spent the next two days on last-minute preparations. Rain and fog blanketed Narragansett Bay for most of July 9... Barton postponed the raid until the next night.

On July 10, the weather turned pleasant. A cooling breeze replaced the previous day's strong winds, and just enough clouds lingered to shroud the bay in darkness. Conditions for a nighttime raid were ideal. That evening, Barton finally shared the details of his plan with his men, and issued a warning: 'The enterprise will be attended with danger, and it is probable some of us may pass the shades of death before it is accomplished... I will not ask you to encounter any hazard but what I shall be exposed to equally with you. I pledge my honor that in every difficulty and danger I will take the lead.' After a momentary pause, the soldiers 'with one voice cried out we will go!'...

Concluding his remarks, Barton stated the underlying purpose of the mission and sought divine assistance: 'I doubt not if you succeed that your country will reward you; if not you will be rewarded in the eternal world for we are endeavoring to get him that is bound in prison, General Lee. As this may be the last time I ever shall have an opportunity of addressing you all, I offer up my sincere prayer to the Great Disposer of all events that he will be pleased to smile on our intended enterprise. If consistent with his will, may success attend us and each one be returned as friends.'