Journal of the American Revolution 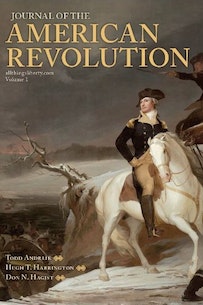 Journal of the American Revolution

Learn more about how to subscribe to the Journal of the American Revolution.

In January of 2013, Todd Andrlik launched the Journal of the American Revolution as an online magazine featuring historical content he describes as "a business casual approach to scholarship." Over the past year, the magazine's daily articles have ranged from in-depth features to top-ten lists providing fresh and clever insights into the Revolutionary War. The best of these offerings have been compiled and recently published as a hardcover book. For today's Read the Revolution excerpt, we selected a timely tale from the collection: an article by Thomas Fleming that reveals a turning point for General George Washington, when a string of losses set tongues wagging against him—and provoked Congress to near revolt.

'Congress does not trust me. I cannot continue thus....'

"The words were spoken in the darkness outside [General George] Washington's small stone headquarters at Valley Forge. Snow carpeted the ground. Nearby, the soldiers of the Continental Army huddled in their huts, their stomachs growling with hunger. The lone listener was thin-lipped Massachusetts congressman Francis Dana. He was head of a five-man delegation who had come to Valley Forge 'to rap a demi-god over the knuckles...'

Another glimpse of what was going on behind the grim realities of Valley Forge in the opening weeks of 1778 was visible in York, Pennsylvania. Shrunk to a mere 18 members, the Continental Congress was meeting in this small frontier town, after their headlong flight to escape the British army that had seized Philadelphia. In the president's chair sat shrewd, wealthy Henry Laurens of South Carolina. A late arrival had handed the nation's chief executive a sealed manuscript he had found on the stairs, entitled: 'Thoughts of a Freemason.' Laurens opened it and read a series of propositions, all denouncing General Washington...

Laurens looked up and realized that the thirteen congressmen in attendance were all staring at him, greedy anticipation on their faces. They expected Laurens to submit this letter to them, as the president was required to do with any and all mail he received... Once the letter was surrendered, they planned to debate it for several days and quite possibly approve some of the more insulting proposals. Could anyone, even a demi-god, cling to power in the face of such public contempt?

Fortunately, Henry Laurens had other loyalties, besides obeying the strictures of his misnamed post. His son, Colonel John Laurens, was one of George Washington's trusted aides. Through this back channel, Washington was in frequent communication with him, and had long since won his support. Instead of submitting the letter to the voracious congressmen, Laurens stuffed it into his pocket and remarked that the fireplace was the best way to dispose of such an 'anonymous production.' Within hours, the letter was on its way to Valley Forge by courier.

Both incidents graphically summarize what had happened when George Washington, having lost two battles to the British army that invaded Pennsylvania in the fall of 1777, allowed the redcoated enemy host to occupy Philadelphia. The general was adhering to the strategy he had enunciated eighteen months ago—that he would never fight an all-out battle against the larger, better equipped royal army. Instead he would 'protract the war' and keep intact an army 'to look the enemy in the face.'

Military ignoramuses all, the congressman and their political counterparts in Lancaster, the keystone state's temporary state capital, had turned on the man who had rescued the expiring Revolution with electrifying victories at Trenton and Princeton in the closing days of 1776. They used the praise that had been showered on Washington to declare him an idol with feet of clay...

When the five man committee arrived at the American winter camp on January 24, 1778, Washington greeted them with his usual politeness and installed them in comfortable rooms in Moore Hall, a large stone building some three miles west of Valley Forge, where the army's quartermasters worked. Nothing in Washington's manner suggested the whining, complaining, indecisive general that his critics in Congress liked to describe. Instead, they met a man who virtually emanated serene authority.

Even more surprising was the written report on the condition of the army that Washington handed the politicians... The report's central theme was stuck in the first paragraph. 'Something must be done—important alterations must be made.' The alternative was the 'dissolution of the army' at worst, or its continued existence as a 'feeble, languid, ineffectual' force—a second best that would only delay the worst for a year or two...

This was the atmosphere in which General Washington invited the Committee Chairman Francis Dana to dinner at his headquarters. For several hours they discussed the condition of the army and what needed to be done to rescue it. Washington laid special stress on the pensions for the officers, an idea he knew was certain to outrage the followers of Sam Adams, who believed that true revolutionists should be motivated by pure virtue, with no necessity for other rewards. Washington told Dana over fifty officers had resigned already from a single division, bringing the total departures to over 300.

Washington quoted—or more probably paraphrased—his report to make his point. 'Matters of public virtue may for a time actuate men' for a few months. But few men could be expected to sacrifice 'all views of private interest to the common good.' It might be worth pausing here to consider how remarkable this conversation was. George Washington, with only three or four years of formal schooling, was revising the basic philosophy of the American Revolution, as enunciated by college-educated ideologues such as John and Sam Adams. Washington relied on 'the experience of every age and nation' to make his case.

Finally, weariness and a dwindling fire brought the conversation to a close. It was much too late for Congressman Dana to navigate the snowy road to his quarters in Moore Hall. Washington suggested he spend the night at headquarters. As he prepared for bed, he felt the need for some fresh air. He stepped outside and began pacing up and down in the cold January night.

A few feet away strode a large man doing the same thing. After a moment's hesitation, Dana spoke to General Washington. Out of the darkness came words Dana would never forget. 'Mr. Dana—Congress does not trust me. I cannot go on thus.'

For a moment the stunned Dana could say nothing. Then he blurted words that leaped involuntarily to his lips. He told Washington that most of Congress still trusted him—and that included Delegate Francis Dana. Many years later, the congressman told his son that this was the proudest moment of his life.

To the immense distress of James Lovell, Sam Adams, and the other ideologues, Francis Dana became a Washington ally. So did the other members of the committee. Soon Congress was voting for all the reforms Washington had called for in his report. The commander-in-chief obtained the power to choose the quartermaster general and commissary general of the army, something Congress had hitherto insisted was their bailiwick-with disastrous results. A new era in supplying and equipping the army soon began.

On the most crucial issue, half-pay pensions for the officers, resistance from the ideologues was fierce. They refused to approve half pay for life. Washington's supporters, led by Gouverneur Morris, suggested a compromise—half pay for seven postwar years. Still the ideologues resisted. A head count revealed a 5-5 deadlock, with Pennsylvania's two delegates on opposite sides.

There was a third delegate, busy merchant Robert Morris (no relation) who seldom came to Congress. Gouverneur Morris sent him a blunt summons: 'Think one moment and come here [to York] the next.' On May 15, the older Morris arrived in time to put Pennsylvania—and Congress—in the pro-pension column, six states to five.

By this whisker-thin political margin, George Washington achieved an army with the stability and endurance to win the protracted War of Independence at Yorktown, three years later."