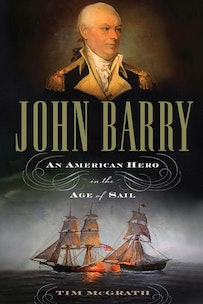 John Barry: An American Hero in the Age of Sail by Tim McGrath

The still winds plaguing the Atlantic Ocean on May 29, 1781, spelled likely defeat for the Alliance, a Continental frigate ship led by Captain John Barry. Under attack by two British ships, the Atalanta and the Trepassey, Barry commanded his besieged troops with unwavering persistence, even after grapeshot ripped through his shoulder. In this excerpt from Tim McGrath’s book, John Barry: An American Hero in the Age of Sail, we see how a mix of courage and lucky coincidence turned a seeming disaster into a stunning victory.

In a situation growing more and more hopeless, Barry stood tall on the quarterdeck. Throughout the battle, he directed the best defense he could for his men and his ship. He gave commands in a clear, steady voice, and his presence, unaffected by the iron and lead flying around him, gave hope and renewed confidence to the Alliances, even as their comrades fell around them...

At nearly three o’clock, thick clouds of smoke seemed to rise from the water, enveloping the three ships as if they were Macbeth’s witches, and the motionless Atlantic their cauldron. The ocean was still enough to perfectly reflect the carnage above it. Aboard the Trepassey, another broadside of grapeshot was being loaded. The gun crews went through their steps, and on ‘fire!’ linstock touched base ring. With a loud roar, grapeshot flew in a withering volley at the Alliance’s quarterdeck. Until this instant, John Barry had gone untouched in his battles with the British.

Not now. A grape ball slammed into his left shoulder. The impact threw him on his back, and he hit the quarterdeck with a sudden thud... For a few minutes he remained on the quarterdeck, directing the action, while his voice grew noticeably weaker. Bleeding profusely, he became lightheaded, and standing became difficult... Barry’s officers begged him to go below. Finally, he relented, having remained ‘on the quarterdeck until by the much loss of blood he was obliged to be helped to the cockpit.’ Turning the quarterdeck over to [Captain Hoystead] Hacker, he let several others carry him below...

From the quarterdeck, Hacker watched the unrelenting dismemberment of ship and seamen with growing concern... Wherever he looked, he saw mounting defeat: sails full of holes, rigging in tatters, the deck awash with blood and strewn with debris—all on a frigate crippled by lack of wind. He conferred with the surviving officers about the deteriorating state of the fight, getting the gist of the ship’s condition and the ‘butcher’s bill’ of casualties. Then he left the quarterdeck for the cockpit. It took unquestioned bravery to face enemy fire, but for Hacker to go below and tell Barry what he had in mind took every speck of his courage.

Having staunched the bleeding, [ship surgeon Joseph] Kendall was applying a bandage to Barry’s shoulder when Hacker approached. Barry shot a dark, quizzical look Hacker’s way, then asked why the lieutenant was not on deck, directing the fight... Hacker asked—he was not fool enough to suggest—‘if the colours should be struck.’

Barry’s reply was immediate and thundering. Struggling against Kendall’s ministrations (and doubtless his shoulder bleeding again), Barry became a wounded lion. ‘No!’ he roared. ‘If the ship can’t be fought without me, I will be carried on deck.’ He dismissed Hacker back to the fighting and began arguing sharply with Kendall about getting dressed, determined to return to the battle...

Now, even Nature seemed to respond to Barry’s exhortations. With unannounced quietness, and ever so gently, the wind returned... Every sailor on deck could feel it on their sweat-stained cheeks. They breathed it into their lungs, and held it in for a second, then exhaled as they watched it slowly, surely, puff out their tattered sails. The combination of Barry’s scalding Irish temper and the return of the wind unleashed the pure warrior in Hacker. Immediately, he bellowed orders as the ship responded to the long awaited, simple change in the weather—a soft breeze. The Alliance answered her helm, sailors manned the braces, and the battered frigate moved into a position that would allow her to finally fight back with all of her might...

The breeze touched British cheeks as well, but for [them] it carried defeat, not victory. Before they could try to sail or row out of range, the first broadside from the Alliance’s starboard guns—fourteen 12-pounders—came smashing into the Atalanta. The proximity to the Alliance had been an advantage for [the Atalanta's] small 6-pounders when coupled with the Alliance’s inability to move. Now such nearness was folly. Round shot shredded British rigging and further battered the Atalanta’s masts, already damaged rom the battle’s opening broadside. Seconds later, the fourteen guns on Alliance’s portside were loaded, primed, aimed, and fired at the Trepassey. One blistering salvo from the Alliance was enough for [Lieutenant] King. With his ship ‘Quite disabled,’ he ordered his colors struck.

Aboard Atalanta, [its commander Sampson] Edwards was not yet inclined to surrender... But in his attempt to sail the Atalanta out of danger, the strain on her injured masts reached the breaking point. Edwards and his crew heard a sharp crack, then another. They knew at once what was coming next. Pulverized by the Alliance’s guns, the fore and mizzen masts gave way. The Atalanta’s crew scrambled in an effort to avoid the wood, canvas, and rigging crashing onto the deck. Meanwhile the Alliancewas wearing again, her guns ready. On the uproll, Hacker cried, ‘Fire!’ This last, raking broadside did the trick: ‘The Atalanta... was a wreck.’ Reluctantly, Edwards, too, struck his colors.

Barry was still struggling up their hatchway when all went silent above him. Then he heard another chorus of hoarse cheers, only this time they came from the Americans. After the second British ensign fluttered down, they left their posts, leaping into the shrouds and along the bulwarks, roaring in exhausted jubilation. Recognizing why his sailors were cheering, Barry allowed Kendall’s assistants to change his course, and get him to his cabin.