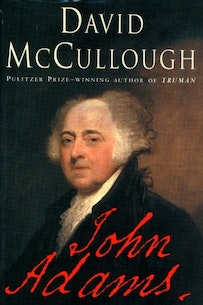 Establishing formal peace between Britain and America required lengthy and complicated negotiations. In this excerpt from David McCullough's John Adams, we travel to Paris in the fall of 1782, where Adams, Benjamin Franklin, and John Jay begin talks with the British to officially end the war. The three are ignoring Congress's instructions to negotiate in concert with the French Foreign Ministry, in agreement that 'America was not fighting a war for independence to be told what to do by the French.' Despite the men's successful negotiations with the British, it would be almost another full year until the definitive agreement, known as the Treaty of Paris, was signed.

Formal sessions with the British negotiators began the morning of October 30—Adams' forty-seventh birthday—and continued into the last week of November, as snow fell on the city day after day, only to melt as fog set in...

The fundamental questions to be dealt with, after acknowledgment of independence, were the boundaries of the United States, the right of navigation on the Mississippi River, debts, the interests of American Tories or Loyalists, and American fishing rights on the Grand Banks off Newfoundland, a main point with Adams.

The Americans insisted that Britain cede all territory between the Appalachian Mountains on the east and the Mississippi on the west, and to this the British agreed, thus at a stroke doubling the size of the new nation. The all-important right of the United States to navigation on the Mississippi was also settled.

On the question of private debts incurred by Americans to British merchants before the war, Franklin and Jay felt these had been counter-balanced by the American property confiscated or destroyed by the British army. But Adams strongly objected. Debts contracted in good faith should be paid, he insisted, and such a clause was included, though it would ultimately prove ineffective.

The British wanted compensation for the Loyalists. To Henry Strachey it was essential that such an article be included as proof to the thousands of American refugees that the British government, to which they had remained faithful, had not forgotten them. It was a point of view difficult for the Americans to accept, having, as they made clear, no sympathy for such people.

Stratchey departed for London, taking the proposed articles for approval... On November 25, [he] returned from London and the talks resumed... Only two points remained to be settled: recompense for the Loyalists and American fishing rights on the Grand Banks off Newfoundland. Adams preferred that nothing be said of the Loyalists. Franklin was especially vehement that they receive no special treatment. In the end, after a 'vast deal of conversation,' the United States promised the Loyalists nothing. It was left that the individual states be requested to provide some form of compensation for property they had confiscated, a gesture that would prove largely meaningless...

It was the argument over the fisheries that nearly brought negotiations to a halt when Adams, once again 'unalterably determined,' refused to accept any compromise that would impair New England's ancient stake in the sacred codfish. With the same vitality he had once brought to the courtrooms of Massachusetts and the floor of Congress, he championed the right of American fishermen, citing articles from treaties past and explaining in detail the migratory patterns of the cod, not to say the temperament of seafaring New Englanders. 'How could we restrain our fishermen, the boldest men alive, from fishing in prohibited places?' he asked.

Then, just as agreement seemed near, Henry Strachey proposed to amend the line specifying the American 'right' of fishing to read 'liberty' of fishing, to which young Fitzherbert declared the word 'right' to be 'an obnoxious expression.'

The moment was one made for Adams. Rising from his chair, smoldering with indignation, he addressed the British: 'Gentlemen, is there or can there be a clearer right? ....If Heaven in the Creation have a right, it is ours at least as much as yours. If occupation, use, and possession have a right, we have it as clearly as you. If war and blood and treasure give a right, ours is as good as yours. We have been constantly fighting in Canada, Cape Breton, and Nova Scotia for the defense of the fishery, and have expanded beyond all proportion more than you. If then the right cannot be denied, why then should it not be acknowledged? And put out of dispute?'

It was settled—almost. Article III of the treaty would read, 'It is agreed that the people of the United States shall continue to enjoy unmolested the right to take fish of every kind on the Grand Bank.' However, on the matter of taking fish along the coast of Newfoundland and 'all other of his Britannic Majesty's Dominions in America,' the people of the United States were to have the 'liberty,' which, insisted the British negotiators, amounted to the same thing.

'We did not think it necessary to contend for a word,' wrote a more mellow John Adams years afterward.

By the end of the day there was agreement on everything. Dining that evening at this hotel with Matthew Ridley, Adams was in high spirits. Asked if he would have fish, he laughed and declined, saying he had had 'a pretty good meal of them' already that day...

The following day, Saturday, November 30, 1782, all parties made their way through still another damp Paris snowfall, again to [Richard] Oswald's quarters at the Grand Hotel Muscovite for the signing of the preliminary treaty. Oswald was the first to fix his name, followed by the four Americans in alphabetical order.

In effect, the Americans had signed a separate peace with the British. They had acted in direct violation of both the French-American alliance and their specific instructions from Congress to abide by the advice of the French foreign minister. To Adams there was no conflict in what they had done. The decision to break with the orders from Congress, and thus break faith with the French, had been clear-cut, the only honorable course. Congress had left them no choice. Congress had 'prostituted' its own honor by surrendering its sovereignty to the French Foreign Minister. 'It is glory to have broken such infamous orders,' Adams wrote in his diary. 'Infamous I say, for so they will be to all posterity.'