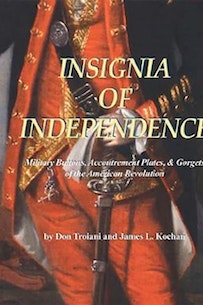 Daily service consumed most of a soldier’s material life. Uniforms rarely lasted, equipment was worn out, lost, or stolen, and much of what does survive tends to be from officers. It can be difficult to find the common, everyday things they wore or carried.

The exceptions to this are the many buttons and other metal accessories worn by soldiers, both enlisted men and officers, on their uniforms and equipment. These objects can be found in paintings, collections, and archaeologically in camp sites and battlefields. In their encyclopedic work, Insignia of Independence: Military Buttons, Accoutrement Plates, & Gorgets of the American Revolution, Don Troiani and James L. Kochan have scoured the available sources to assemble and illustrate most, if not all, of the known buttons, badges, gorgets, and belt plates used by the Revolution’s combatants. They chose to divide the book by army, not object type. They include accessories used by the British, German, Loyalist, American, French, and Spanish Armies. They further divide each army by regiment and look at items from enlisted men and officers in each unit.

While most of these metal accessories were designed to identify individual regiments, some, like the Continental Army’s USA button, reflected national associations. As you’ll see in the excerpt below, the USA button emerged after the signing of the Declaration of Independence, as America’s new-found national identity was coming into focus.

Found on nearly every Revolutionary war site from the New York frontier, to Georgia, the USA button was the most universally used, military marked button in the Continental service. Almost every regiment and branch of service used them, often in conjunction with specialized State buttons, and many others used nothing else. A deserter from Benjamin Flower's Artillery Artificer Regiment wore, when he left in January 1779, a "...brown jacket with white buttons having the letters USA on them." Exactly when the USA button first appears is not clear, several have been found on the Saratoga battlefield but this is not conclusive as there was later military activity in the area during the war. The first written account is a deserter description of December 1777. A likely guess might be the late spring or early summer of 1777. A brass gang mold found at Independence Hall in Philadelphia, shows that USA buttons were produced in large quantities at Government workshops and from there issued to the various departments, either loose or already affixed to uniforms. Most of the specimens found are very uniform and well-made, obviously the product of centralized professional button makers. Some, of course, were the products of local Continental artisans at the Fishkill Barracks, NY and Connecticut Village.

Clearly, besides showing national affiliation, the provision of marked buttons would help to prevent misappropriation of government stocks of valuable clothing. George Measam, Clothier General of the Northern Army, remarked in October 1778 on the "plain white button" found on the French contract coats recently received and suggested that "it [should] be in the future marked U.S. to shew the property of the United States in them." The clothing specifications of 1778 called for "The buttons to be of block tin or brass and cast solid, with a strong eye or shank with the letters USA in Roman letters on each button."

Ten thousand uniforms conforming to the specifications of the 1779 requisition were actually made-up in France during 1779-80 and stockpiled. The uniforms, along with bolts of cloth, trimmings and buttons for many thousands of additional uniforms, were shipped aboard the Marquis de Lafayette, which was captured at sea by the British and the entire shipment sold at a prize auction in London. Whether any of the solid brass USA buttons were ever produced or among this shipment, is not presently known.

One overseas order that was actually delivered was arranged by Colonel John Laurens in France on April 26, 1781. This substantial delivery was to include, 300 gross white metal buttons marked U.S.A [for coats], 25 gross yellow metal buttons marked the same, 300 gross white metal buttons for waistcoats....". The final shipment arrived in Boston during August of that year and contained, "1,200 dozen large and 1,200 dozen small white stamped metal buttons, 660 dozen large and 660 dozen small white metal buttons."21 Without a doubt these were the "borderless" style USA buttons found on the Hudson Highlands. It seems these were not issued out of stores until sometime in 1782. The "yellow metal" USA buttons do not appear to be part of the delivery and indeed, none have ever been excavated USA buttons have been encountered on some strictly post-war sites such at Fort Adams (near Natchez, Mississippi), and even a few early American encampments of the war of 1812.