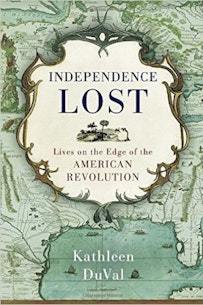 Independence Lost: Lives on the Edge of the American Revolution by Kathleen DuVal

What does the story of the American Revolution look like from the “edge” of empire? How did the various groups and peoples of the Gulf Coast perceive and experience this uncertain period of shifting borders and changing political allegiances? Kathleen Duval’s, Independence Lost: Lives on the Edge of the American Revolution, offers a different look at the American Revolution from this unfamiliar territory. When we broaden our geographic perspective, a global war emerges where the European powers of Spain, France, and Great Britain were vying for territory on the North American continent throughout the last half of the eighteenth century. By weaving together the narrative threads of eight representative characters whose individual choices and motives all differed, Duval challenges the traditional tale of rebel versus loyalist, American liberties versus British liberties.

The following excerpt, from the “Introduction,” sets the stage for the story of the American Revolution on the Gulf Coast and introduces us to a young Cajun militiaman, an enslaved African American cattle driver, Native Americans, and British colonists whose stories offer diverse and international perspectives on the War for American Independence.

The American Revolution on the Gulf Coast is a story without minutemen, without founding fathers, without rebels. It reveals a different war with unexpected participants, forgotten outcomes, and surprising winners and losers.

Although the Revolutionary War was a global war with global causes and consequences, two circumstances following the rebels' victory led their story to take center stage as the standard history of the Revolution. The first was the Treaty of Paris, in which the United States and Britain divided the eastern half of the continent-and excluded other Europeans and Indians. The second, following the treaty, was the large numbers of Americans settling on lands claimed by Spaniards, Creeks, Chickasaws, Cherokees, and others. The kings of France and Spain entered this global war not because they loved rebellion (much the contrary) but for the same kinds of imperial objectives that had propelled them into previous wars. Although both worried that the rebellion could set a bad example for their own colonies, they were more interested in reversing Britain's victories from the Seven Years' War of the 1750s and 1760s and protecting and expanding their global empires.

On the Gulf Coast, and indeed for most people, the Revolution seemed to be just another imperial war, another war fought for territory and treasure. As different alliances competed for power, Spanish, British, and French colonists, black slaves, and Indians of many nations were drawn into this multifaceted war. The narrative of the Revolutionary era is more true to its people and more fascinating in its complexity if it includes less familiar regions and peoples and if it encompasses the war's experiences and results in all their diversity.

The war on the Gulf Coast proves two truths often buried by common narratives of the Revolutionary War: that most people chose sides for reasons besides genuine revolutionary or loyalist fervor and that non-British colonists exercised a great deal of influence over the war's outcome.

This book focuses on the Gulf Coast, from Florida to Louisiana, because of the astounding number of competing interests that came into conflict there. The Gulf Coast was the only site of Revolutionary War battles that was outside the rebelling colonies during the war but soon became part of the United States. The Gulf Coast's war included participants that most people do not think of when they consider the American Revolution: the French and Spanish, who had a centuries long history in the region; Creeks, Chickasaws, and Choctaws, whose lands spread from the coast deep into the interior of the continent; and people of African descent, whose experiences of enslavement and freedom differed widely and, with the introduction of large-scale plantation slavery, would be changing faster than ever.

To make sense of the dizzying complexity of the Revolutionary War on the Gulf Coast, this book centers on eight individuals. These characters stand in for larger peoples but also illustrate that imperial relationships were almost always personal and that the most complete history is a multi-perspectival one. Today, their names are obscure, but some were famous in their time. Oliver Pollock, Alexander McGillivray, and Payamataha, for example, were names that George Washington and Thomas Jefferson came to know well.

Less known was Petit Jean, who grew up a slave in Mobile. As he tended his master's cattle, he would never have imagined that he would become a trusted spy and courier for Spain. Yet right before the Spanish fleet left Havana for Pensacola, it was Petit Jean who transported Spanish orders for New Orleans to prepare the local militias to aid the naval forces. The Revolutionary War brought Petit Jean this opportunity, and his operations helped the Spanish cause.

Another man assisting the Spanish invading force was a young Cajun militiaman named Amand Broussard. A refugee from the last war between France and Britain, he hated the British for forcing his family out of their Acadian homeland in eastern Canada and was glad to get the chance to fight again.

Eagerly awaiting news in New Orleans, Oliver Pollock, a merchant, had garnered financial support for the war effort. The Continental Congress had appointed Pollock as its agent in Louisiana, where he fostered an unofficial alliance between the rebels and the Spanish crown. Pollock hoped soon to send news of Pensacola's fall to Congress and to General George Washington. Waiting with him was his wife, Margaret O'Brien Pollock, whose Irish Catholic family had long fought against the British and whose husband's wartime decisions would create opportunities and perils for their growing family.

A pressing question on the minds of those defending a well as those hoping to take Pensacola was whether the region’s Native peoples would show up for the battle. The vast inland of North America was Indian country, and its people far outnumbered the Europeans clashing on the Gulf Coast. North of Pensacola was the Creek Confederacy, a loose confederation whose towns ruled themselves separately, needed interpreters within the Confederacy, and had occasionally even joined opposite sides in war. Alexander McGillivray, the son of a Creek mother and a Scottish trader, blamed the rebels for threatening his parents' lands and livelihoods. During the war, he tried to rally Creek fighters to aid the British. His frustrations coordinating war parties later inspired him to try to centralize the Creek Confederacy into a nation and to unite all southeastern Indians into a Southern Confederacy."

In contrast to Alexander McGillivray the Chickasaw leader and diplomat named Payamataha influenced the war by inaction. The British considered Payamataha and the Chickasaws "absolutely at our disposal" and believed that Payamataha was rallying his people to ride the four hundred miles from their towns near the Mississippi River to rescue Pensacola. Payamataha had different plans. He was a leader in a growing movement among Indians to stay out of European conflicts, a movement that, if it succeeded might doom the British effort to retain the Gulf Coast and to quell the rebellion to the north.

Although the Declaration of Independence accused King George III of inciting "merciless Indian savages" against the thirteen colonies, Indians worked for their own interests and indeed had demanded the king's restrictions on westward expansion. They were not simply pawns of the British king. Like Europeans and Africans, American Indians had their own policies, disputes, and agendas. Natives, Europeans, and Africans knew one another well by the eighteenth century, and their lives had been changed by the same global forces. The natural resources and labor of Europe's colonies fed an industrial revolution in England, which was changing the material lives of people all over the world.

This book's characters lived more than a thousand miles away from where the war began. Most had no interest in Britain's attempt to tax and regulate its colonies and little in common with Boston's famously raucous protesters. Still, when war came, it presented them all with opportunities and dangers, and they worked to profit from the squabble among the English speakers to the north. They tried, in dramatic and innovative ways, to use the war to forward their own ambitions for themselves, their families, and their nations.

Get bi-weekly Read the Revolution featured excerpts right to your inbox.