Take a break from Thanksgiving preparations to learn about a classic American dessert Gingerbread! We’ve whipped up a delicious double feature for this week’s Read the Revolution email with tempting and intriguing stories about our early American culinary history.

Anne Byrn’s cookbook, American Cake: From Colonial Gingerbread to Classic Layer, the Stories and Recipes Behind More Than 125 of Our Best-Loved Cakes, blends history with sugar, flour, and frosting to explore America’s rich (and sweet) culinary past through cake.

Gingerbread for Liberty: How a German Baker Helped Win the American Revolution is a treat for our younger readers! Written by Mara Rockliff and illustrated by Vincent X. Kirsch, this colorful story is about Christopher Ludwick, a real baker from Philadelphia who served as Superintendent of Bakers in the Continental Army during the Revolutionary War. Check out Christopher Ludwick’s real Cookie Molds , in the Museum’s online collection!

American Cake: From Colonial Gingerbread to Classic Layer, the Stories and Recipes Behind More Than 125 of Our Best-Loved Cakes , by Anne Byrn 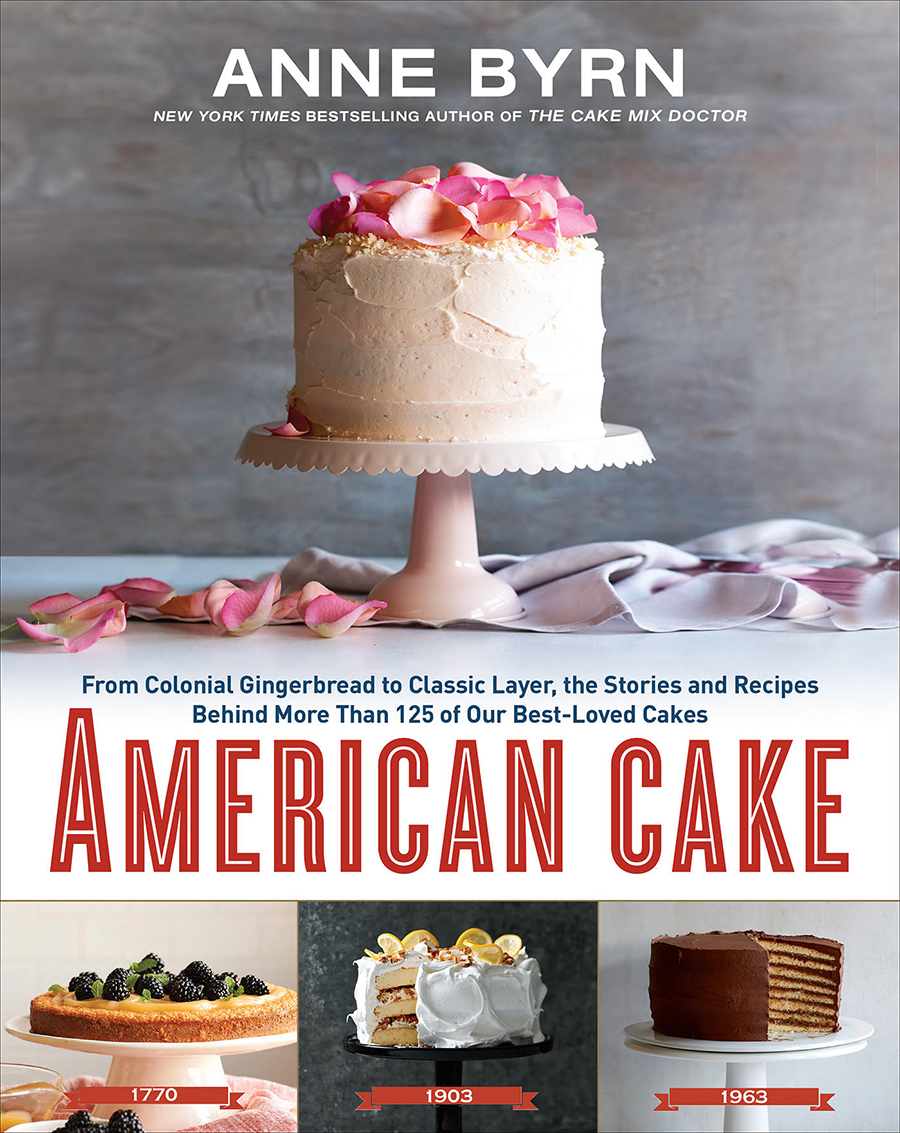 From the Puritans who settled in New England to the Dutch in New York, Quakers in Philadelphia, Germans in much of Southeastern Pennsylvania, and British on down the coastline to Charleston, people came to America to build a new life. Once home kitchens and bake ovens were established, and once a source of sweetener was available–whether it was local honey, maple syrup, molasses, or the more expensive white sugar–cake baking in American began.

The first true cakes baked at home on American soil were sweet yeasty, breadlike cakes and fruitcakes, British pound cakes, cheesecakes, sponge cakes, and a molasses ginger cake. They were leavened with yeast cultures brought with the settlers from Europe or made from the foamy barm skimmed from fermented beverages like beer….Other cakes were rich with eggs, such as the early cheesecakes and British-style pound cake. A different twist was found in the English and French style of light sponge cakes containing a high ratio of eggs and sugar but no butter. Served with fresh berries they suited the warmer climates of and the plantation lifestyles of Virginia and South Carolina.

The colonists baked gingerbread, too, and their recipes were both English and German in origin. But it was not until the wood ash leavening called potash was produced by burning cleared trees in the Hudson River Valley that American gingerbread benefited from this leavening and became soft and more cake-like in texture.  Potash, or pearlash as it was known, was an alkali and a forerunner of baking soda. When combined in a gingerbread batter with sour milk or molasses, which were both acidic, it produced carbon dioxide bubbles that helped raise the cake in the oven.

Cakes in the early colonies were baked for the same reasons they are today–to celebrate a birthday, a wedding, a houseguest, a holiday. They were baked for everyday meals (gingerbread, sponge cake) as well as important events. Knowing how to bake a cake was a skill passed on from mother to daughter. Recipes, called receipts, were carefully handwritten in journals, and over the generations more recipes, notes, and thoughts were added. 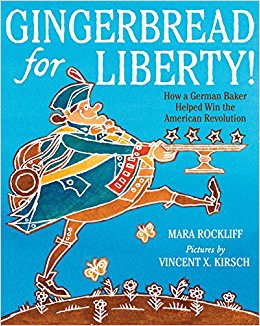 Gingerbread for Liberty: How a German Baker Helped Win the American Revolution by Mara Rockliff, Pictures by Vincent X. Kirsch

Ages 6-9. Based on the life of Christopher Ludwick, a forgotten hero of the American Revolution

"Everyone in Philadelphia knew the gingerbread baker. His honest face…his booming laugh…

And, of course, his gingerbread–the best in all the thirteen colonies. His big floury hands turned out castles and queens, horses and cows and hens–each detail drawn in sweet, buttery icing with the greatest skill and care.

And yet, despite his care, there always seemed to be some broken pieces for the hungry children who followed their noses to the spicy-smelling shop.

“No empty bellies here!” the baker bellowed. “Not in my America!”

For once upon a time, he had been young and hungry too. And he had followed his own nose to this New World, where a hard-working young man could open his own bakery and always have enough to eat.

But Now, something was in the air (besides the smell of baking gingerbread). Newspapers shouted

The baker hung his apron up. He dusted flour off his hands. “Where are you going?” asked his wife. “To fight for my America!” he said. “I was a soldier once.” “That was long ago and far away,” she said. “You are a baker now, and you are old and fat.”

The baker knew his wife was right. But he knew also that he loved his country. Somehow, he had to find a way to help.

He packed his bags and went to join General Washington."

American Cake: From Colonial Gingerbread to Classic Layer, the Stories and Recipes Behind More Than 125 of Our Best-Loved Cakes by Anne Byrn

Gingerbread for Liberty: How a German Baker Helped Win the American Revolution by Mara Rockliff, Pictures by Vincent X. Kirsch