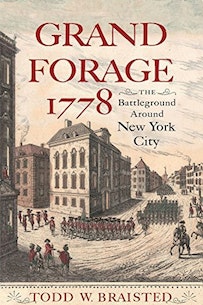 The year 1778 saw the entry of France into the American War for Independence and the exit of William Howe-Commander in Chief of the British Army in America since 1775. Taking over for Howe, Henry Clinton faced a bigger challenge than his predecessor, he was now fighting a global war against the rebelling colonies and their European ally. Receiving new commands from Lord George Germain, principal Secretary of State for American affairs, General Clinton was ordered to send troops to protect British interests along the Atlantic-from Nova Scotia to the West Indies. Further, Germain wrote to Clinton that an "attack should be made upon the Southern Colonies, with a view to the conquest & possession of Georgia and South Carolina." Needing to provision the army for the campaigns ahead, Clinton spent the summer and fall of 1778 foraging in the counties around New York City, including Bergen County, NJ and Westchester County, NY.

Todd W. Braisted's Grand Forage 1778: The Battleground Around New York City narrates the planning of this large-scale troop movement, detailing how the British Army gathered provisions and battled with American soldiers and civilians for supplies and loyalties. The following excerpt outlines the challenges Clinton faced in feeding his army and camp followers.

The logistical challenges facing Clinton were formidable to say the least. He needed to tend to everything from budgeting cash to send with each force to filling out blank court-martial warrants so that those forces could administer military justice when necessary. Aside from all the minutiae attendant upon an army, two significant needs had to be filled: shipping needed to be contracted to move the regiments to their destinations, and provisions for humans and horses sufficient to last weeks at sea needed to be on hand when the ships were ready to sail. It is staggering to try to conceive the planning and material support needed to keep the British military, its animals, and the population under its governance all fed. On a daily basis, at the end of July 1778, for the army at Rhode Island and New York, the British fed 39,775 men, 4,032 women, 2,934 children, 162 wagoners, and about 300 general officers and refugees. And that number was increasing every day thanks to prisoner exchanges, Provincial recruits, and refugees flooding in from the countryside. The number does not take into account the thousands of sailors with the Royal Navy, the merchant shipping, privateers, and especially the thousands of inhabitants. All that food and forage had to be either sent from Europe, grown locally, or even captured at sea and sold at the markets. Calculations had to be taken on what was in stores, when to order from Europe, and how long the food would take to come to America. The time to worry for the British was generally when stocks were down to a four-to-six-week supply.

The weekly allowance of food issued to each man was 7 pounds of bread or flour, 7 pounds of beef or 4 pounds of pork, 6 ounces of butter, 3 pints of peas or 1 1/2 pints of oatmeal, and one-half pint: of rice, to which was added daily 1 1/3 gill of rum. This was supplemented by fresh vegetable s grown by the military on garrison and regimental levels. This local produce could not supply the needs of all the troops but was of sufficient value for the use of the sick in hospitals, where the value of a healthy diet was recognized. The growing of vegetable gardens in a garrison as large as New York was bound to be attended by problems, not the least of which was the expense of gardeners, whose wages alone for 1777 and 1778 amounted to nearly 1,400 pounds New York currency. Worse, the 1778 crop from Governor's Island off Manhattan's southern tip was severely damaged by the Royal Navy when Rear Admiral James Gambier ordered 'his Sheep, Cows & Hoggs into it.' Spruce beer became a regular part of the soldiers' rations, with breweries at New York City devoted entirely to its production. One brewery was operated by the commissary general's department, with eleven men turning out 4,233 gallons every two days. The beer was issued in casks at the brewery, which the regiments were responsible for returning in order to receive further issues.

In doing their calculations, Clinton's commissaries looked at their present garrison as well as how much food they would have on hand by type, subtracting for the ten thousand men being shipped off. The quantities, for whatever reason, did not break down evenly. By September 14, 1778, the garrison at New York was down to 50 days' worth of bread, flour or rice, 74 days of beef and pork, 62 days of butter, and a whopping 167 days of oatmeal and peas. Calculating the rum to be sent with the departing troops and those left at New York, there was 52 days' worth of that beverage, or 38,769 gallons. The supply situation would have been much worse had not six provision (or victualing) ships arriving from Cork, Ireland, learned by chance of the evacuation of Philadelphia while they were headed up the Delaware River. Writing to Lord Germain on September 15, Clinton pleaded, 'With great deference I submit to your Lordship the consequence, if by any accident, we should happen to fall Short of Provisions, and whether in these precarious times, it is not absolutely necessary for the safety of this Army, that there should be a large Supply in Store.'

The horses an army kept were as valuable a resource as ammunition, arms, or uniforms. Horses were indispensable in mounting cavalry and officers, as well as drawing the hundreds of wagons in the service. Without the wagons, no provisions, ammunition, or baggage could be drawn, to say nothing of transporting artillery. In New York in December 1777, with but a small garrison and no cavalry to speak of, 907 horses were drawing rations daily. With each horse drawing about fourteen pounds of hay (or forage) daily, that added up to over six tons of hay every day. With the army's return from Philadelphia, and around a thousand cavalry horses, that number skyrocketed. A return made out on August 30 by Deputy Commissary George Brinley showed there was 748 tons of hay on hand, an additional 1,750 tons yet to be harvested within the lines and more within reach in Westchester. 'A very Considerable quantity of Salt Hay might be had at Long Island, and Staten Island, provided the Farmers could be assured of a price that would pay them for cutting it,' Brinley advised Clinton. Great Britain's commander in chief in America definitely had the acquisition of more forage on his mind, with the expedition of General Tryon to the east end of Long Island conducted for that purpose. There was, however, a much greater source of forage nearby, one that Brinley did not take into account. Clinton was poised to invade Bergen County, New Jersey.