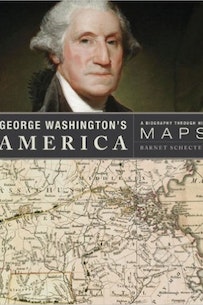 Throughout his life George Washington amassed an impressive personal collection of over ninety maps and atlases. Upon his death, a selection of those maps was bound together into an atlas (now owned by Yale University) and used as the foundation for George Washington's America: A Biography Through His Maps by Barnet Schecter. Twenty-six of his maps, depicting locations from Cape Breton Island, Nova Scotia to the western coast of Florida and the Gulf of Mexico, have been reproduced in rich detail and full color. The maps highlight the prominent role of geography in shaping Washington's personal, military, and political outlook. In crafting this unique biography, Schecter interweaves Washington's maps with his correspondence and other writings to produce a narrative portrait that interprets his life as a surveyor, military commander, president, and finally private citizen and land speculator.

The following excerpt featuring the 1775 map, A Plan of the City of New York and Its Environs* introduces the unique issues facing Washington and the Continental Army in the early1776 as they began to fortify and defend the city from the British.

*The maps featured in George Washington's America: A Biography Through His Maps are in the Yale University Library Map Collection.

'The consequences of the enemy's possessing themselves of New York have appeared to me so terrible that I have scarcely been able to sleep,' Washington's second in command, Major General Charles Lee, wrote to him in Cambridge on January 5, 1776. An eccentric Englishman who had resigned his commission in the British army to join the American cause, Lee was gifted with a flair for language and the power of persuasion. He had written a highly influential piece of American propaganda in the run-up to the war, and now he urged Washington to send him through Connecticut to recruit a regiment of volunteers that would 'effect the security of New York-and the expulsion or suppression of that dangerous banditti of Tories who have appeared on Long Island ... Not to crush these serpents before their rattles are grown would be ruinous.'

Leery of Lee's mercurial temperament and careful not to overstep his own authority, Washington consulted with John Adams, who assured him in a letter from Watertown, Massachusetts, the following day that as commander in chief he did not need further authorization from Congress to send Lee into New York at the head of a regiment. Moreover, Adams declared, New York was the greatest strategic prize in North America. The city, the province, and the Hudson River flowing through it were of 'vast importance,' he wrote, forming 'the nexus of the northern and southern colonies, as a kind of key to the whole continent, as it is a passage to Canada, to the Great Lakes, and to all the Indian nations. No effort to secure it ought to be omitted.' (See A Plan of the City of New-York, page 122.)

In his instructions to Lee two days later, Washington wrote that if the British captured the city and controlled the river 'they will thereby command the country and the communication with Canada. It is of too much consequence...to hazard such a post at so alarming a crisis.' (See A Map of the Most Inhabited Part of New England, page 83, for the Hudson from New York City to Lake Champlain, and A General Map of the Middle British Colonies, Detail #6, page 58, for the rest of the route to Canada.) Washington kept the pressure on the British in Boston while he dispatched Lee to fortify New York City and its environs. 'Should they get that town and the command of the North River, they can stop the intercourse between the southern and northern colonies, upon which depends the safety of America,' Washington told another general. 'My feelings upon this subject are so strong that I would not wish to give the enemy a chance of succeeding.'

Lee would be Washington's eyes and ears in New York until Boston was safe and the commander in chief could bring the whole army down from Cambridge. Arriving in New York on February 4, Lee soon reported that the citizens there had cheerfully helped him remove the cannon from the batteries to the Common for safekeeping. (See A Plan of the City of New York, page 122, and Detail #1.) 'To do them justice, the whole show a wonderful alacrity, and in removing the cannon, men and boys of all ages worked with the greatest zeal and pleasure.' For the most part, Lee concluded, the people of New York were as sympathetic to the patriot cause 'as any on the continent.' Following Washington's orders to suppress the Loyalist population, Lee soon reported that the two British warships and the merchantman carrying the royal governor of New York, which had been provisioned by the city under an uneasy truce, had now retreated from the city to less threatening positions. 'The Asia lies betwixt Nutten's and Bedloes Island 'and 'the Duchess Gordon with his Excellency Governor Tryon is under her stern,' he wrote. 'The Phoenix is stationed a league below the Narrows.' (See A Plan of the City of New York, Detail #2, page 126.)

'We have taken strong hold of Hell Gate, so that the passage betwixt Long Island and the Continent is absolutely blocked up to the enemy,' Lee wrote to Washington from New York on February 19. Hell Gate was the rocky passage (spanned today by the Triborough Bridge) where Long Island Sound became the East River. This was the back door to New York's waters, the front gate being the channels through the network of sandbars between Sandy Hook and Coney Island. These two entrances were the only access for the British navy from the Atlantic. Rocks and whirlpools made Hell Gat e hazardous for ships, as sandbars did at Sandy Hook. Since the British warships would have to enter in single file, these were the best places to begin confronting their fleet. While Lee had begun to fortify Hell Gate as a choke point to bombard enemy ships, he had neglected Sandy Hook. (See A Map of the Province of New York, Detail #2, page 127.)

Lee was waiting for more troops, he told Washington, before digging trenches and building fortifications 'on Long Island opposite to the city ...This I think a capital object, for should the enemy take possession of New York when Long Island is in our hands, they will find it almost impossible to subsist. 'Control of the area opposite the city (today's Brooklyn Heights) would enable the Americans to cut off the flow of farm goods to Lower Manhattan by stopping the ferries. Not only would Howe 's army be deprived of provisions, they would be forced out of the city by American cannon pointing down at them from this high ground across the East River, just as they had been driven from Boston by Washington's seizure of Dorchester Heights and Nook's Hill. (See A Plan of the City of New York, Detail #2, page 126. Western Long Island, today's Borough of Brooklyn, is labeled Part of Long Island, and Brooklyn, then a village, is marked Brock Land. The Ferry House is indicated at the East River shore, opposite New York City and Lower Manhattan.)

'What to do with the city, I own puzzles me,' Lee told Washington. 'It is so encircled with deep navigable water that whoever commands the sea must command the town.' For the British, the topography of New York and its environs presented an opportunity they had lacked in Boston: the ability to use their naval superiority to capture a water-bound city that provided access to the interior of the continent. For the same reason, New York posed a new challenge for the Americans: Unlike Boston, which they had besieged at its narrow neck, New York's waters offered the enemy multiple routes for invasion. While the British could have landed at various points around Boston Harbor, their troops would have had to proceed into the countryside without naval support, repeating the scenario of Lexington and Concord, when they retreated under fire. (The Charles and Mystic rivers were not deep enough for warships.) In New York, the waterways would allow the warships to follow the troops closely, covering their advance and retreat with massive firepower.

Would the British immediately try to capture New York City, at the southern tip of Manhattan, and if so, would they sail up the Hudson or East River-or both-to land their troops? Or would they first make an amphibious landing on western Long Island to capture the ground that commanded Lower Manhattan? Might they also put troops ashore in New Jersey after taking Staten Island? Ultimately, Washington would feel compelled to straddle two rivers, dispersing his troops along a sprawling defensive line from New Jersey to western Long Island.