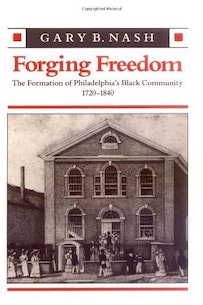 With its emerging abolition movement, Philadelphia was an appealing locale for runaway slaves, free blacks, and Caribbean refuges in the decades before and after the Revolutionary War. In the city, free blacks worked to establish their own independent churches, form abolition and resettlement societies, and to secure their own livelihoods against a backdrop of growing white hostility into the nineteenth century. Gary Nash’s, Forging Freedom: The Formation of Philadelphia’s Black Community, 1720-1840, details this period in African American history as generations of free blacks pursued a secure and dignified existence based on self-employment and an intricate system of self-support.

Once the exhilaration of freedom had been savored, one compelling necessity stood above all others for freed persons: finding a livelihood.

Although no systematic records exist to trace black occupations in the first decade after the war, it appears that by far the largest number of free blacks found work as mariners, day laborers, and in domestic work. But former slaves availed themselves of a variety of other work opportunities. Historians have often assumed a degradation of black skills in the emancipation period, perceiving that former slaves of artisans, now cast free of a master's protection and patronage, were forced as freemen into menial labor. But many more free blacks than is recognized carved out new occupational niches for themselves, including substantial numbers who launched their own small enterprises that served a predominately black clientele.

City directories that listed black households with their occupations and addresses indicate that a sizable black professional and entrepreneurial group was taking form by the early nineteenth century. Significantly, many of the leaders of the independent black church movement were self-employed, including most of the trustees and elders of St. Thomas's and Bethel churches. Self-employment seems to have been highly prized among the first generation of freed persons, for, as Emma Lapsansky has written, it allowed ‘the ambitious person to maximize his income,’ provided status within the black community, and ‘offered the greatest possible insulation against the perils of white hostility.’

At the top of the pyramid of independently employed free blacks stood a small but influential number of black doctors, ministers, teachers, and other professionals. The German traveler Johann David Schoepf noticed black doctors in Philadelphia as early as 1784, and at the turn of the century Samuel Wilson was so highly regarded for his skill in treating cancers that white Philadelphians readily went to him. By 1810 at least a dozen black clergymen and teachers taught in the schools for free blacks associated with both white and black churches. The first black teacher in Philadelphia was Eleanor Harris, an African-born former slave described after her death in 1797 as a ‘woman of character’ and a ‘well qualified tutoress of children.’ In 1816 even a black accountant, a black fencing master, and a black ‘intelligence officer’ had found employment in Philadelphia.

In the skilled crafts free blacks found an important area of enterprise. Once the black community grew to several thousand, its residents could support black shoemakers, carpenters, tailors, bakers, and a variety of others who provided skilled services and crafted articles. Some artisans were so highly regarded for their craftsmanship that whites patronized them too. The most notable was James Forten, the black sailmaker who had worked for twelve years for the white sailmaker Robert Bridges, who had also employed Forten's father, and then took over his thriving business in 1798 when Bridges retired. Business hummed so briskly at Forten's sail loft on Front Street that by 1807 he was employing a racially mixed crew of thirty men. From his enterprise came the precisely fabricated sails for many of Philadelphia's largest merchant ships. By 1795 other blacks were practicing as carpenters, shoemakers, bakers, brushmakers, confectioners, ropemakers, tailors, sievemakers, and tanners.

In another area of service activity, food catering, blacks were actually the pioneering entrepreneurs. Philadelphia's Robert Bogle, a former slave who began as a waiter, was the first to hatch the idea of contracting food services at funerals, weddings, and parties. Bogle's reputation grew to the extent that by 1829, when he operated as both undertaker and caterer, he was memorialized by Nicholas Biddle, the city's illustrious financier, in Ode to Bogle. Other free blacks followed his lead, and by the 1820s the famous catering firm of Augustine and Baptiste, founded by two of the French slaves brought to Philadelphia during the St. Domingue rebellion, was serving foreign dignitaries and wealthy Philadelphians at many lavish balls and fêtes.

Also at such gala gatherings were black musicians. John Bernard, the famous English comedian who performed in Philadelphia from 1797 to 1803, described balls ‘of the first respectability’ where ‘a crew of black fiddlers provided the music.’ A few years later, about 1809, there arrived in the city a seventeen-year-old French-speaking black from Martinique who would become Philadelphia's most famous musician of the antebellum period. Organizing a dance orchestra, Francis (Frank) Johnson by 1819 was in demand wherever the white Philadelphia aristocracy gathered for social events. Celebrated as a keyed-bugle, trumpet, and violin player and a prolific composer of dance and martial music, ballads, operatic arrangements, and ministrel songs, Johnson was described in 1819 as ‘leader of the band at all balls, public and private sole director of all serenades . . . inventor-general of cotillion.’ He provided most of the music at the parades and parties honoring General Lafayette when the old Revolutionary War hero visited the city in 1824, and continued a brilliant career for another twenty years.

Artisan, service, and proprietorial work roles by no means guaranteed success, but enough blacks established themselves by the early nineteenth century to create the nucleus of a black middle class. Though many were frozen in unskilled jobs at the bottom of the urban workforce largely controlled by white Philadelphians, scores of free blacks created their own work roles and thus provided themselves with decent material rewards and, equally important, space to operate autonomously. In several areas, such as oystering, driving carriages, chimney sweeping, shoeblacking, catering, and hairdressing, they developed a near monopoly. To be sure, these were occupations that in the eyes of white Philadelphians held little glamor or prospect for accumulating a fortune. But most of these occupations required a notably public kind of work in which free blacks were continuously interacting with white city dwellers of all classes. Moreover, even the most mundane of occupations, such as master chimney sweep or oysterer, sometimes proved very profitable and usually involved organizing the work of others, buying and selling, and making economic decisions-forms of social intercourse that former bondsmen and bondswomen, a few years before, would have regarded as unlikely. Even the ragman made daily decisions with existential meaning that we can only guess at-which streets to walk, when to set out, when to quit work. Though he had to endure poverty, the ragman did not have to withstand the insulting comments of a boss, maintain a schedule set by somebody else, and face layoffs during an economic downturn.