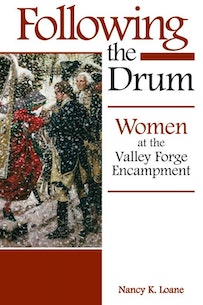 Following the Drum: Women at the Valley Forge Encampment by Nancy Loane

The image of Revolutionary War soldiers suffering in winter encampments remains strong in our national consciousness, thanks to the diaries and letters of Continental Army officers and soldiers as well as evocative works by authors and artists like Washington Irving and William B.T. Trego. Largely forgotten in these accounts and images are "camp followers"—the civilians who accompanied General Washington's army and shared in its struggles. In Nancy K. Loane's book, Following the Drum, she focuses on female camp followers during the American Revolution: among them nurses, cooks, laundresses, and even ladies of privilege, like Lucy Knox. Knox's presence at numerous encampments not only kept her family together during the war, but also facilitated a lasting friendship with a fellow camp follower: Martha Washington.

At twenty-two, Lucy Flucker Knox was one of the youngest of the officers' wives to come to Valley Forge. Social, audacious, and officious, she was sure of her place and let everyone know it. 'I hope you will not consider yourself as commander in chief of your own house,' she wrote to her new husband soon after they were married, 'but be convinced... there is such a thing as equal command.' General Henry Knox, who commanded the Continental Army's artillery, adored his big, bossy, brilliant wife.

Lucy Flucker, who came from one of Massachusetts' leading families, grew up surrounded by affluence and high style. Still she set her heart on Henry Knox, a bookseller with no imposing ancestors and no fortune, soon after she saw him in his Boston store... But there was a problem. Lucy's parents were Loyalists, and wealthy, prominent ones at that... He and his wife 'exploded in wrath' when they realized their pampered and privileged seventeen-year-old daughter was smitten with the twenty-four-year-old shop owner. Not only was the man—oh the horror of it!—'in trade,' but, worse, he actively supported the rebel colonists...

The American Revolution has been called the 'First Civil War.' Families were ripped apart when loyalties split between the British and Americans. Lucy's parents, staunch Tories, sailed to England from Boston early in the war, and she never saw or heard from them again...

Henry Knox and their children were all the family Lucy Knox had in America. This prompted Lucy, unusual among the wives of the American officers, to habitually follow her husband as he moved up and down the eastern coast during the war. For a woman born of privilege and wealth, living conditions with the Continental Army undoubtedly seemed primitive. Yet Lady Knox remained devoted to the cause and to 'her ever dear Harry,' her 'only friend... in the world.'

Little is known of Lady Knox's activities once she arrived at Valley Forge. She came to camp after the celebration of both the May 6 French Alliance and the memorable performance of Cato, so did not participate in those festivities. Although Catharine Greene had already left for Rhode Island, Martha Washington was still in camp. In spite of differences in their ages—Martha celebrated her forty-seventh birthday at Valley Forge, Lucy was just twenty-two—the two ladies became friends, and they would have visited back and forth during the few weeks they spent together in Pennsylvania...

Lucy Knox spent considerably more time at the fourth encampment, at Middlebrook, New Jersey, than she had at Valley Forge. The Continental Army's 1778-79 winter camp became a far livelier place than Valley Forge had been. Henry and Lucy Knox did their part by staging an extravagant 'entertainment' to celebrate the anniversary of the French Alliance—a gala event attended by Mrs. Washington, Mrs. Greene, and a 'vast concourse of spectators from every part of the Jersies.' Henry Knox proudly wrote his brother that seventy ladies and about four hundred officers and gentlemen attended the festive frisk.

Guests were greeted by a thirteen-cannon salute. Dinner was sumptuous and 'would have done honour to the taste and opulence of the most flourishing cities.' The magnificent display of fireworks, which was set off by the officers, lasted for over an hour and illuminated the façade of a specially constructed Greek temple... The fireworks over, the guests proceeded to an elegant ballroom, where Washington led a pregnant Lucy Knox in the first dance. 'The power of description,' gushed the New Jersey Journal on February 23, 1779, of the Knox's extravaganza, 'is too languid to do justice to the whole of this grand entertainment...'

A few other snippets of information about Lucy Knox during the Revolutionary War survive. We know, for example, that during the 1779-80 Morristown encampment Lucy and Henry Knox and their two children lived on a farm near camp. According to [France's principle liaison officer Jean de Beauvoir, Marquis de] Chastellux, Lucy and the little ones made up a 'real family' for General Knox, as she 'never leaves her husband.' In February 1780 General Washington and Lucy Knox opened the first Morristown Assembly ball. This was to have been another extravaganza, but hostile weather intervened and only sixteen ladies and sixty officers attended. And, as mentioned previously, Chastellux noted seeing General and Mrs. Washington riding out in a carriage to pay a social call on Lucy Knox at the New Windsor encampment.

Martha Washington and Lucy Knox consoled and comforted each other at Mount Vernon during the siege of Yorktown. It is reported that, in later years, Lucy described to her children the suspense, trembling, fear, and hope that gripped the two friends as they waited for the daily express with news of the battle. After the Yorktown victory, a jubilant Henry Knox took the first opportunity to write his wife, 'the charmer of my soul.' 'A glorious moment for America!' Knox exalted. 'This day Lord Cornwallis and his army march out and pile their arms in the face of our victorious army...'

When the Treaty of Paris was finally signed and the long war over, Congress appointed Henry Knox as the first secretary of the war (the title was originally 'secretary at war'). The Knox home became a favorite salon for the fashionable, the intellectual, and the cultivated. A contemporary of Lucy Knox described her as a 'lively and meddlesome person but an amiable leader of society, without whose cooperation it was believed by many besides herself that nothing could be properly done in the drawing room or ballroom or an place indeed where fashionable men and women sought enjoyment.'"