Financier of the Revolution 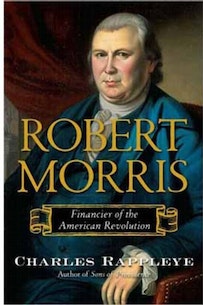 Robert Morris: Financier of the American Revolution by Charles Rappleye

In journalist Charles Rappleye's hefty biography of Robert Morris, we learn about the rise and fall of one of America's founding fathers. Morris-a signer of the Declaration of Independence, the Articles of Confederation, and the Constitution-is largely remembered for his financial contributions to the war effort through his shipping and banking company, Willing & Morris. A member of the Pennsylvania Council of Safety and the Continental Congress, Morris used his merchant network to equip the Continental Army with gun powder, weapons, and other supplies. He is also credited with raising the necessary funds that allowed General George Washington to move the army to Yorktown in the fall of 1781. After the war, Morris invested heavy in several ruinous land speculation schemes, resulting in him spending three years in debtor's prison. He died in the spring of 1806 and is buried at Christ Church in Philadelphia.

The following excerpt from Robert Morris: Financier of the American Revolution, outlines Morris' early involvement in the Independence movement-as a member of the Continental Congress and as a contract merchant for the same body.

Morris was not a revolutionary, but he was a nationalist, and he was asserting this position as an actor in a new, national arena. His sole objective was the national interest, and at this point Morris continued to believe the best choice for America was to retain its ties to the empire. 'I am now a member of the Continental Congress & if I have any influence or should hereafter gain any it shall be exerted in favor of every measure that has a tendency to procure Accommodation on terms consistent with our just claims.'

At the time Morris made his first appearance in the Congress, on Friday, November 3 [1775], the ideological feud within that body had receded before the pressing issues of logistics. War had yet to be formally declared, but there were armies in the field-besides Washington at Boston, two armed expeditions were marching to Canada-and defenses to erect. With no executive office and little staff, the Congress managed its affairs through subcommittees composed of the delegates themselves. It was a poor vehicle for administration, and a capable executive like Morris soon found his services in demand.

Morris received a crucial assignment in December when he was named to a committee charged with obtaining arms and ammunition. Here he was performing the same delicate, urgent business for the Congress that he handled at the Committee of Safety, but the scope of his responsibilities was greatly expanded. Again, all the work performed by the committee was patently treasonous, and all its transactions were covert. It was titled the Secret Committee of Trade, or, more simply, the Secret Committee.

Morris was new to the committee but he was already well acquainted with its operations. In fact, he was already doing business with it under the powder contracts Congress debated in September. The committee was formed days before that deal was inked, and Thomas Willing was one of its original members; his resignation, on grounds that the committee's night meetings were inconvenient, prompted Morris's nomination. Ben Franklin was also a member; and he and Morris would collaborate here as they did on the Committee of Safety. Aside from Franklin and Samuel Ward, chairman of the committee and a former governor of Rhode Island, the members shared a mercantile background and were generally aligned with Dickinson's moderate politics.

The committee handled its contracts in a clubby, often incestuous manner. The Willing & Morris contract was just one example; Philip Livingston, John Alsop, and Francis Lewis, all of New York, were other members who obtained contracts with the committee, as did John Langdon of New Hampshire, and Silas Deane of Connecticut. The chairman, Samuel Ward, was more a politician than a merchant, but he made sure several of the early contracts went to his friends in Newport and Providence.

This mode of business would appear designed for corruption, and the committee eventually faced accusations of self-dealing. But the in-house deals were dictated at least in part by the nature of the committee's operation. First, as its activities were secret, there would be no advertising of contracts, no competitive bids; transactions were necessarily limited to insiders. Second, the committee operated well within the parameters of colonial commerce, where personal contacts were the primary and often the sole consideration in routine business deals. Proximity was a factor as well; since the committee was situated in Philadelphia, it would be difficult, especially in wartime, to hammer out terms with third parties in distant ports. In one case, Deane advised a Connecticut associate to make the trip to Philadelphia himself in order to secure a contract. And there was a limited pool of merchants who were capable of mounting the international trading ventures that the committee authorized. Of that small circle, Willing & Morris stood at the center.

Despite the opportunities for graft, it is beyond dispute that the committee performed an important duty for the Congress, establishing clandestine supply lines that were essential to mounting an armed response to Britain. That the Congress turned to its own members to do so may have been its only viable option.

Further; not all the contracts went to committee members or even their friends. Especially in Philadelphia, there were many cases where the committee did reach outside its circle in awarding contracts. Last, and perhaps most important to keep in mind, the committee ventures were dangerous and highly speculative. Contractors generally gained only on commissions charged for assembling and selling cargoes. Advances from the committee paid for outgoing cargoes, but the returns went directly to the government; insurance covered risk of capture but not sea risk and not the ships themselves. Experience would show that, for all the advances made by the committee, few of the merchants involved profited from them.

Still, the Secret Committee contracts entitled merchants to engage in foreign ventures at a time when most such trade was barred by the continental embargo. Contractors obtained a decided advantage simply by keeping their ships and wharves in operation. They were serving their government and themselves at the same time. It was just the sort of high-risk, multifaceted operation that Robert Morris relished.

At the outset, the Secret Committee acted at the orders of the Congress, which issued specific requisitions as different needs arose. Gunpowder was first, of course, and weapons. Soon after came new orders for sailcloth, which American mills were too primitive to produce; medicines, hardware, lead for bullets, and more powder. Each order was funded to a rough estimate of the quantity of stores needed, and the contracts then executed by the committee. It was a demanding business, requiring interminable hours drawing up contracts and sailing orders.

The contractors received their advances in paper money, new Continental dollars that the Congress was having printed by the million. Even this basic chore required direct intervention: among the first tasks assigned Morris by the Congress was to 'call on the several persons appointed to sign the Continental bills and desire them, with all possible expedition, to finish numbering and signing said bills, as the money is much wanted.' Just how 'said bills' were to be supported was a problem the Congress left to a later day.

In December, Morris took on still another responsibility when he was appointed to the Marine Committee. The Congress had begun in September to raise a navy; its first step was to purchase the Black Prince from Willing & Morris and refit her as a warship. By December it had converted three other merchantmen, but now it grew more ambitious, voting to build thirteen new naval vessels at ports from New Hampshire to South Carolina. The project was daunting; one delegate derided it as 'the maddest idea in the world.' But others, led by John Adams and including Morris, felt that some answer to British naval superiority was indispensable.

By the fall and winter of 1775, Morris had his hands full. His days began at dawn, with meetings of the Pennsylvania Committee of Safety. From there he went to the Pennsylvania Assembly, which continued in session until November 25, or to the Congress- conveniently for Morris, all these bodies met at the State House. In the afternoons he might have slipped out for a few hours at the counting house; in the evenings, he sat with the Secret Committee, usually at one of the town taverns, often late into the night.