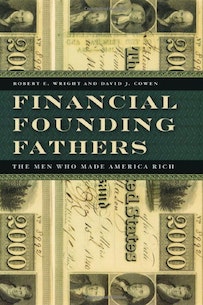 Financial Founding Fathers: The Men Who Made America Rich by Richard Wright and David Cowen

Purchase the book from Bookshop.org.

History is quick to remember the battlefield heroes of the American Revolution, yet other heroes toiled diligently behind the scenes to ensure the war's success. In Financial Founding Fathers, authors Robert E. Wright and David J. Cowen reveal America's precarious financial state during the war, and how men like Robert Morris and Haym Solomon not only stabilized the nascent nation but helped lay the foundation for the economic superpower it became. Morris, the first Superintendent of Finance, brought order to the chaos of the early American economy--and created the first national bank.

By [1780], Congress was more or less broke, unable to borrow money, to collect taxes, or to emit currency. Its bills of credit were worthless, or nearly so. The several states were almost as bad off.

Farmers and manufacturers responded to the crisis by withholding their productions and their coins from the market, forcing the army to endure chronic, severe shortages. A near mutiny in May at Washington's headquarters in Morristown demonstrated just how precarious the war effort had become. [Robert] Morris and other leading Philadelphians ameliorated the situation by forming the Pennsylvania Bank, a private nonprofit institution capitalized with the private bonds of leading merchants. The pooled pledges of the bank's founders, which totaled some $315,000 Pennsylvania currency, immediately made the new institution more creditworthy than the bitterly divided and ineffectual national government.

But the Pennsylvania Bank could do only so much. Congress, its back against the wall, turned to Morris for a miracle. On February 20, 1781, it unanimously elected Morris Superintendent of Finance, a new position designed for him and him alone. After negotiating for more authority and the right to continue his private mercantile pursuits, Morris formally accepted the challenge.... Morris eventually enticed Congress to add a slew of capable financiers to his team, men like Philadelphia merchants Michael Hillegas (treasurer), Joseph Nourse (register), and John Swanwick (cashier). Morris also forged important business relationships with the nation's best and brightest exchange brokers, the most important of whom was Haym Salomon.

In 1781, Salomon sold $200,000 of government bonds by endorsing them with his personal credit. Salomon's credit was better than that of the national government because he had never defaulted on a note and was well known as a man of integrity and a true Patriot. Indeed, he bought government bonds when no other broker wanted to touch such risky assets... Shrewdly, he bought French bills of exchange, keeping the market for those assets stable. The local French minister noticed this deft move, so soon Salomon was asked to assist Morris in coordinating loans with the French and the Spanish. The linguistically gifted Pole also acted as paymaster general for the French forces in America.

When Morris was at his wit's end, he called for Salomon. Morris' diary entry of August 28, 1782, for instance, notes that Morris urged Salomon 'to leave no stone unturned to find out money and the means by which I could obtain it.' If he could not find the funds elsewhere, Salomon often advanced them himself, at low interest... Young delegate and future president James Madison also borrowed from Salomon, informing Edmund Randolph that when he was hard pressed for money, he relied on the 'kindness of our little friend in Front Street' who assisted him with loans but 'obstinately rejects all recompense.' Perhaps Salomon's greatest feat was quickly raising $20,000 to help fund Washington's secret march from New York to Yorktown to trap Cornwallis...

Though he relied heavily on his trustworthy broker to beat the streets for money, Morris alone understood the grand plan that would save the rebellion. Even a vibrant economy, Morris understood, could get by with only a small amount of hard cash provided people and businesses were willing to extend credit. Tender laws, which forced creditors to accept depreciated paper money at full face value, had by all accounts 'extinguished all credit.' Why give up a team of horses, or a barn full of grain, for a piece of paper of doubtful value? Why lend someone real money-gold or silver coins-only to be repaid with paper?...

Once both the tender laws and the depreciating currency were eliminated, confidence and hence private and public credit could be restored. Confidence in the future of the country would become a self-fulfilling prophecy because if people believed the rebellion would succeed they would not press for immediate payment in coin, the financial pressure on the national government would be relieved, and Congress would indeed win the war. But how could Morris start this virtuous circle? Morris's personal credit, the collection of in-kind taxes, the establishment of a bank, and a loan from the French proved key.

The French had little love for Americans or their ways. But by stirring up trouble for France's leading rival, Great Britain, the rebellious colonies had done the French a great service, for which they grudgingly paid in specie. The sum paid was a pittance in the scheme of things, but it proved adequate to Morris's needed.

Before the French funds could be realized, however, Morris found it necessary to order supplies for the army, still encamped at Morristown, New Jersey. No one in their right mind would advance anything of value to Congress, but they would to Morris. So Morris used his personal credit to ensure that the army got fed. Their bellies full, American soldiers did not pillage the farms of upstate New York, New Jersey, or Pennsylvania. Those farmers therefore remained Patriots, all thanks to the mystique of Morris's signature.

In-kind taxes, the collection of taxes in farm produce, also helped in the short run. Though grossly inefficient in many ways, payment in wheat or cows was of course superior to no tax revenue at all. Morris turned over some of the taxes directly to the army, which at least got fed. The rest he exchanged at home or abroad for hard currency, foreign exchange, munitions, clothing, or other necessities. The breadth and magnitude of this commerce was stunning. His reputation enhanced further by his adroit handling or such an extensive trading empire, Morris found that he could issue his personal promissory notes to a large sum. Such notes, ultimately met with French coin, helped to fund Washington's successful foray against the British at Yorktown.

Though the victory at Yorktown ultimately ended the war, it took two more years for the British to come to terms. In the meantime, the army's readiness had to be maintained. In-kind taxes and Morris's personal credit, however, could extend only so far. What was needed was a way to pool the credit of many powerful merchants like Morris. The Pennsylvania Bank had proved the basic soundness of the idea. Something more was needed, however. Morris somehow had to multiply the little specie he had available. He had to stretch his cash as far as possible, in effect to increase the supply of money at his disposal. The vehicle for so doing was the nation's first true commercial bank...

The Bank of North America began operations on January 7, 1782... But prosperity was still several years down the road.