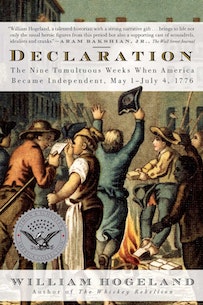 Declaration: The Nine Tumultuous Weeks When America by William Hogeland

Declaring independence was a distant thought for many Americans in May of 1776. Even after a year of war, their focus was on reclaiming their rights as British citizens, not separating from Britain. Few Americans saw a different path, but those that did pushed America toward independence.

In Declaration: The Nine Tumultuous Weeks When America Became Independent, May 1-July 4, 1776, William Hogeland explores the personalities, backroom politicking, and passions that ignited our pursuit of liberty. For Hogeland, Samuel Adams was the shadowy mastermind who changed the course of American culture through local politics. As the book begins, Adams, though from Massachusetts, hoped to sway Pennsylvania’s assembly elections in his favor.

Samuel Adams of Boston was not to be seen at the polls that Mayday. He'd done more than he hoped anyone would ever know to push the Pennsylvania election toward American independence. He made it his business to be anywhere but at the center of what he inspired.

He roomed with his second cousin John Adams near the Delaware River's loud docks. He’d arrived in the spring of 1775, shortly after the shooting war had broken out at Lexington and Concord, entering Philadelphia in dour triumph. Muffled churchbells tolled to show the colonies' support for his suffering Massachusetts. Most visitors were overwhelmed by the size, stink, and hustle of the busiest port in America and second-most-sophisticated city in the empire. Some marveled at the broad avenues on a rational grid. Not Samuel Adams. He found little to remark on and nothing to admire or approve in Philadelphia, in the province of Pennsylvania itself, or in the middle colonies as a whole. He'd been called out of his New England country, and out of Boston's narrow alleys and turning streets, by a duty to make things like today's election go a certain way. Where he saw frippery and pusillanimity, a saving change must come.

Of what was called middling height (fairly short) and middling build (somewhat stocky), at fifty-three Adams was past middle age, and physical vigor had never been the source of his success. He was shaken by an intermittent, full-body tremor that sometimes made him unable to write. He dressed not just plainly but shabbily. He hadn't even learned to ride until recently, and then only at the insistence of cousin John, his top deputy, thirteen years younger. John thought nobody as important as Samuel should go horseless and that riding improved health. After some help in mounting, Samuel managed to stay on top all the way from Massachusetts to Philadelphia, enduring the burning and soreness that the saddle would cause any new rider, especially one his age. The Adamses had some flannel drawers made along the way to cushion the seat, and by the time they arrived in town, the younger Adams was confounded. The servants had been whispering that the elder Adams was the better rider.

Samuel Adams had will. And he had a calling. From his earliest days in back-room Boston politics he'd been working against royal elements in government and Parliamentary involvement in Massachusetts trade. For more than ten years he'd been openly harassing royal governors. In the Massachusetts legislature, he authored bills against British trade acts and petitions dissenting from the governors enforcement efforts. In the newspapers, under many pen names, he extolled liberty and made vicious attacks both on royal administrators and on citizens who seemed weak in the patriot cause. In taverns, political clubs, and the Boston town meeting he made civic virtue identical with crowds' fierce street protests. In correspondence with officials in other colonies he fostered intercolonial resistance.

Samuel Adams had pushed Massachusetts toward the shooting at Lexington and Concord, and now he'd gone all the way. England was a irredeemable tyrant, he said, not to be bargained with. A complete break offered the only hope for virtue in Massachusetts and throughout America.

That was treason. The British called Adams a "Machiavel of chaos," among other things. They would hang him if they could, and his cousin John, too.

He had an official role in Philadelphia as a member of the Massachusetts delegation to the Continental Congress. Unofficially he was that delegation's boss, or tried his best to be. But his ultimate purpose in defiance of the hangman, of Pennsylvania, of Congress, of his own delegation, and of anyone else, was to turn the war of defense into a war of offense, and turn America independent.

So he badly wanted pro-independence assemblymen elected in keystone Pennsylvania today. But he never took anything for granted. "We cannot make events," he'd advised an ally the night before the election. John Adams had a finer ear for a joke than his cousin, a bitterer one, too, and he might have laughed aloud: Who had ever been more audacious in making events than Samuel Adams? Samuel meant it. He didn't, in fact, make events. He improved on them. At home in Boston he could fix an election. Here he'd done all he could.

For all of his terrible urgency, Samuel Adams always seemed to remain in faith that the chance for irresistible action would soon reveal itself.

At the polls, violence broke out at about two that afternoon, when a man named Joseph Swift became irate at the presence of so many immigrants.

Before and after marking their ballots and handing them in at the Chestnut Street windows, voters came into the yard behind the State House, a high-walled expanse set with tall trees. Pale new leaves caught the wind while far below, the "independents" and the "reconciliationists" formed knots, glaring and gossiping and rubbing up against each other.

The immigrants who infuriated Joseph Swift were Germans. As a bloc they were known to favor independence. Not that Swift was a loyalist. Hated in most colonies, loyalists had fled to England or Canada or substantially lowered their profiles. Swift was a Pennsylvania patriot, a man about town of old stock, on the board of the biggest hospital and on the vestry of Christ Church, which was more
than a century old and whose new steeple made it the tallest structure in the colonies. Men like him supported the Continental Congress and the Continental Army. They were risking their security and possibly their lives to restore liberties. The Germans - "Dutch," most Pennsylvanians called them - clung to a guttural language, strange food, and incomprehensible newspapers. Why should they be allowed to swing Pennsylvania toward Massachusetts madness, American independence?

In the yard, Swift got the Germans' attention and told them that, except for what he implied was the ludicrous technicality of their naturalization, they had no right to vote in Pennsylvania. (Immigrants
from the mother country were natural by blood.) He drove the point home: Dutch had no more right to vote, he said for all to hear, than Negroes did. Or, he added, Indians.

Philadelphia's Germans had a well-deserved reputation for toughness. This bunch moved in on Swift. If he'd expected help, he'd made an error. Others in the crowd gathered to watch. As the Germans began pushing Swift around, his friends couldn't step in. Swift's bigotry might cause a full-scale riot. The independents, poll-watching and electioneering in the yard, would run through the streets to broadcast it and bring out more of their vote. Swift's friends started falling all over themselves apologizing to the Germans. The Germans turned on them, too.

In the brawl, Swift managed to shake himself free of the yard and run down Chestnut Street, Germans in pursuit. He fled along the walk against the route of voters, eastward toward the Delaware, arriving at the mansion of one of the city's wealthiest merchants. Breathless and shaken, Swift was taken in. His pursuers were left in the street.

The independents back at the State House took heart from that fracas. Their hope soared at about 6 P.M., when the sheriff closed the State House door with voters still arriving. Voting was concluded for the day, the sheriff shouted. It would resume at nine the next morning. But less genteel voters couldn’t take time off during the workday. They had to vote before nine and after six. Closing the polls seemed to disenfranchise them. The voters started haranguing the sheriff. They demanded that the election continue. They refused to disperse.

The sheriff threw the door open. People flowed in. To the satisfaction of the independents, voting resumed on the authority of the voters themselves. Late that night, when at last the independents went to bed, they had reason to think they would awaken to a new day for America.

On May 2, when the results started coming in, it became clear that voters had rejected the new ticket. They'd returned to the Pennsylvania assembly a majority of establishment lawmakers whose purpose was to ensure that Pennsylvania's delegates in the Continental Congress blocked any move for American independence.

The majority had spoken. Reconciliationists up and down the coast could look forward to an end of Boston extremism. The war would remain defensive, legitimate, restoring old rights and keeping
America within the empire.

Samuel Adams had other ideas.