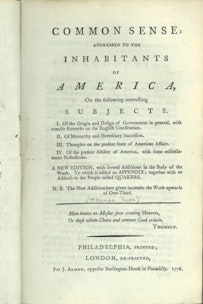 This month marks the 239th anniversary of the publication of Thomas Paine's influential pamphlet Common Sense. Written by Paine less than two years after he emigrated to Philadelphia from England, Common Sense outlined the need for American independence. Paine presented his arguments in plain language that made political discussion accessible to colonists of all walks of life. This approach that made it wildly popular upon its publication and helped cement its enduring impact. Today's excerpt comes from the section "Thoughts on the Present State of American Affairs."

In the following pages I offer nothing more than simple facts, plain arguments, and common sense; and have no other Preliminaries to settle with the reader, than that he will divest himself of prejudice and prepossession, and suffer his reason and his feelings to determine for themselves; that he will put on, or rather that he will not put off the true character of a man, and generously enlarge his views beyond the present day.

Volumes have been written on the subject of the struggle between England and America. Men of all ranks have embarked in the controversy, from different motives, and with various designs; but all have been ineffectual, and the period of debate is closed. Arms, as the last resource, decide this contest; the appeal was the choice of the king, and the continent hath accepted the challenge...

The sun never shined on a cause of greater worth. 'Tis not the affair of a city, a county, a province, or a kingdom, but of a continent-of at least one eighth part of the habitable globe. 'Tis not the concern of a day, a year, or an age; posterity are virtually involved in the contest, and will be more or less affected, even to the end of time, by the proceedings now. Now is the seed-time of continental union, faith and honour. The least fracture now will be like a name engraved with the point of a pin on the tender rind of a young oak; the wound will enlarge with the tree, and posterity read it in full grown characters.

By referring the matter from argument to arms, a new era for politics is struck; a new method of thinking hath arisen. All plans, proposals, &c. prior to the nineteenth of April, i.e. to the commencement of hostilities, are like the almanacs of the last year; which, though proper then are superseded and useless now. Whatever was advanced by the advocates on either side of the question then, terminated in one and the same point. viz. a union with Great-Britain: the only difference between the parties was the method of effecting it; the one proposing force, the other friendship; but it hath so far happened that the first hath failed, and the second hath withdrawn her influence.

As much hath been said of the advantages of reconciliation which, like an agreeable dream, hath passed away and left us as we were, it is but right, that we should examine the contrary side of the argument, and inquire into some of the many material injuries which these colonies sustain, and always will sustain, by being connected with, and dependent on Great Britain: To examine that connection and dependence, on the principles of nature and common sense, to see what we have to trust to, if separated, and what we are to expect, if dependant [sic].

I have heard it asserted by some, that as America hath flourished under her former connection with Great Britain that the same connection is necessary towards her future happiness, and will always have the same effect. Nothing can be more fallacious than this kind of argument. We may as well assert that because a child has thrived upon milk that it is never to have meat, or that the first twenty years of our lives is to become a precedent for the next twenty. But even this is admitting more than is true, for I answer roundly, that America would have flourished as much, and probably much more, had no European power had any thing to do with her. The commerce, by which she hath enriched herself, are the necessaries of life, and will always have a market while eating is the custom of Europe.

But she has protected us, say some. That she has engrossed us is true, and defended the continent at our expense as well as her own is admitted, and she would have defended Turkey from the same motive, viz. the sake of trade and dominion.

Alas! we have been long led away by ancient prejudices, and made large sacrifices to superstition. We have boasted the protection of Great Britain, without considering, that her motive was interest not attachment; that she did not protect us from our enemies on our account, but from her enemies on her own account, from those who had no quarrel with us on any other account, and who will always be our enemies on the same account. Let Britain wave her pretensions to the continent, or the continent throw off the dependence, and we should be at peace with France and Spain were they at war with Britain. The miseries of Hanover last war ought to warn us against connections.

It has lately been asserted in parliament, that the colonies have no relation to each other but through the parent country, i.e. that Pennsylvania and the Jerseys, and so on for the rest, are sister colonies by the way of England; this is certainly a very round-about way of proving relationship, but it is the nearest and only true way of proving enemyship, if I may so call it. France and Spain never were, nor perhaps ever will be our enemies as Americans, but as our being the subjects of Great Britain."

Thomas Paine. Common Sense; Addressed to the Inhabitants of America, On the following interesting subjects. I. Of the Origin and Design of Government in general, with concise Remarks on the English Constitution. II. Of Monarchy and Hereditary Succession. III. Thoughts on the present State of American Affairs. IV. Of the present Ability of America, with some miscellaneous Reflections. (Philadelphia: R. Bell, 1776) 29-34.