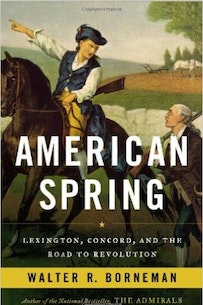 American Spring: Lexington, Concord, and the Road to Revolution by Walter Borneman

Walter R. Borneman's book American Spring looks at the first six months of 1775. As political tensions between the colonial resistance and the British Government grew into military violence, ordinary people faced dramatic and profound decisions. Which side would an individual support as the conflict deepened and spread, the forces of the government or of the resistance? Would he or she attempt to remain neutral or become an active supporter, perhaps even by taking up arms?

As thousands of Americans faced these decisions, leaders on both sides of the argument took up their pens. The newspaper and pamphlet debate in British America during the political crisis of the late 1760s and early 1770s produced a rich and complex variety of arguments. In this section, Borneman discusses one particular strain of this debate, between a defender of the government position, Daniel Leonard, and his now-more-famous adversary, John Adams, who advocated the position of the resistance.

For much of the heyday of American newspapers during the twentieth century, major cities boasted of at least two papers of competing political persuasions. It was no different in Boston in 1775. Among the newspapers in Boston that year, Isaiah Thomas’s Massachusetts Spy and the Boston Gazette, published by Benjamin Edes and John Gill, trumpeted the rebel cause. Brothers Thomas Fleet Jr. and John Fleet’s Boston Evening-Post and Richard Draper’s Masachusetts Gazette — variously known as or published in tandem with the Boston News-Letter and Boston Post-Boy — were bastions of loyalist thought…

If his suspicion of Sewall’s involvement was indeed his belief at the time, it brings a particular poignancy to the exchange. Not only were the two men advocates of their respective causes, they also were stranged friends turned determined adversaries. But in fact, as Adams acknowledged later, he was in error. Massachusettensis was not Jonathan Sewall but yet another Massachusetts lawyer named Daniel Leonard…

Smart, wealthy, well connected, and recognized as one of the finest legal minds in Massachusetts, Leonard was a prime example of just how difficult it sometimes was to determine which side one was on — or even that a crisis requiring a choice of sides was at hand. Not only did Leonard have all the trappings of royally connected power and esteem, he was also a lieutenant colonel of the Bristol County militia. In this capacity, he reportedly spoke coolly of King George, king’s attorney though he was.

Then, in 1774, royal governor Thomas Hutchinson appointed Leonard a mandamus councilor. Now his allegiance was really being tested. Leonard denied that he had changed his position, but he chose to don the robe of loyalist rather than be further swayed by rebel arguments. When rebels in Taunton challenged his decision, Leonard’s home was attacked by a mob firing shots and breaking windows. Like many rural mandamus councilors, Leonard sought refuge in occupied Boston.

Whether or not this thirty-four-year-old lawyer and businessman — run out of his own town by rebels — took it upon himself to speak out for the loyalist status quo or was possibly encouraged to do so by General Gage is not known. But in December of 1774, Leonard began his series of articles — in the form of letters to the editor — that were published in the Massachusetts Gazette and the Boston Post-Boy and Advertiser. Leonard chose to sign himself Massachusettensis, a concocted name with a Latin flair.

The use of pseudonyms or pen names by contributors was not at all unusual in those days, but just why writers adopted them is an interesting question. There usually was little mystery — among the well informed, at least — as to the true identity of an author. Newspapers were leaky sieves of gossip and innuendo. Libel laws may have been of some concern, but prosecution was usually reserved for blatant assaults on individual character rather than advocacy of general political views. Such presumed anonymity tended, however, to allow authors to express views more pointed and accusations more personal than if they had signed their own names. Some authors no doubt also felt that such pseudonyms — particularly when they referenced noted Roman statesmen or were otherwise Latin flavored — added a mark of distinction and gravity to their words.

Samuel Adams appears to have used at least twenty-five pseudonyms, including Candidus, Populus, and A Son of Liberty, and Alexander Hamilton (Publius, Americanus), Benjamin Franklin (Silence Dogood, Richard Saunders), Robert Livingston (Cato), and James Madison (Helvidius) all employed pen names. Another advantage, according to journalism historian Eric Burns, was that the more pseudonyms an author used, ‘the more likely it was that readers would think of him as several authors [and] his views, therefore, would seem to be held by many rather than simply one man with a prolific pen.’

Daniel Leonard was somewhat of an exception to the hate-mongering that frequently sprang from such pseudonymous columns; the impassioned pleas he made as Massachusettensis for loyalty to the king began in a balanced and moderate tone. ‘When a people, by what means soever, are reduced to such a situation, that every thing they hold dear, as men and citizens, is at stake,’ Leonard wrote in his first letter, dated December 5, 1774, ‘it is not only excusable, but even praiseworthy for an individual to offer to the public any thing that he may think has a tendency to ward off the impending danger…’

As January of 1775 passed, Leonard’s weekly missives became more strident. ‘You are loyal at heart, friends to good order,’ Massachusettensis told his readers. “But you have been most insidiously induced to believe that Great-Britain is rapacious, cruel and vindictive.’ Two weeks later, he warned: ‘To deny the supreme authority of the state is a high misdemeanor… to oppose it by force is an overt act of treason, punishable by confiscation of estate and most ignominious death.’

John Adams chose to answer Massachusettensis as Novangelus, meaning ‘New Englander,’ but he took his time doing so. His first Novangelus letter appeared in the Boston Gazette on January 23, 1775, seven weeks after Massachusettensis’s opening salvo. Adams’s tone was uncompromising from the start, particularly about the inevitability of Great Britain’s power. Massachusettensis was mistaken, Adams wrote, when he said ‘the people are sure to be loosers [sic] in the end. They can hardly be loosers, if unsuccessful,’ Adams maintained, ‘because if they live, they can but be slaves, after an unfortunate effort, and slaves they would have been, if they had not resisted.’